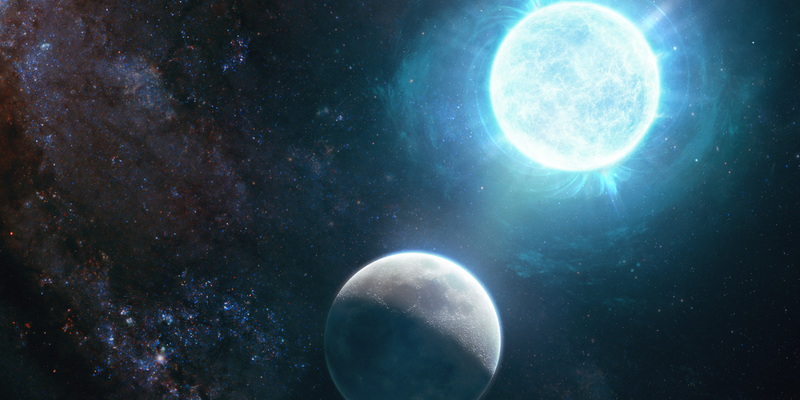 ZTF J1901+1458 is the smallest and most massive white dwarf that has been discovered. Guiseppe Parisi

A recent paper published in Nature by a team that includes researchers from UBC and CalTech confirmed the discovery of the moon-sized white dwarf star, designated ZTF J190132.9+145808.7 (shortened to ZTF J1901+1458).

White dwarfs are the remnants of intermediate-mass stars, less than eight to ten times the mass of the sun, that have exhausted their nuclear fuel and collapsed to the size of a small planet. Due to the exotic properties of matter at these densities, more massive white dwarfs are actually smaller than less massive ones. In the words of UBC alum Dr. Ilaria Caiazzo, lead author on the study and Burke Prize fellow at CalTech, ZTF J1901+1458 is essentially “packing a mass greater than that of our sun into a body about the size of our moon.”

“It has a very strong magnetic field ... among the strongest, and it is very, very massive,” said Dr. Jeremy Heyl, an astrophysics professor at UBC and part of the research team behind the discovery. The white dwarf’s mass has been calculated at 1.327–1.365 times the mass of the sun, putting it within 2 per cent of the Chandrasekhar limit, which is the maximum possible mass for a white dwarf.

Using data from the Zwicky Transient Facility (ZTF), the team looked for repeating signals characteristic of single rotating objects like white dwarfs. According to Heyl, the Gaia telescope’s measurements of the distances to nearby stars was “probably the most crucial thing” to the discovery, since it distinguishes between small objects like white dwarfs and stars that are large but farther away.

“Before Gaia came around, we knew of maybe 10,000 white dwarfs, but now we know of maybe half [a] million,” said Heyl. Once promising white dwarfs were found, data from the Swift and PAN-STARRS telescopes narrowed down the candidates to those whose temperature and spectral signature match predictions for an ultra-massive white dwarf.

Due to its very high mass, ZTF J1901+1458 is cooling much faster than most white dwarfs, by an unusual nuclear process called the Urca process. The density and temperature in the core (20 to 30 million ºC) is so high that the nuclei of sodium atoms are briefly absorbing electrons from around them, the net result being that the white dwarf’s heat energy is being radiated away in the form of neutrinos and antineutrinos.

“If you just tweak one of the progenitors by a little bit, by just a per cent or two, the resulting product would have been too massive to live as a white dwarf and collapse, and probably explode in a supernova,” said Heyl.

The type of supernova in question is the type Ia supernova, whose properties were important evidence for the expansion of the universe but whose process is not well understood. According to Heyl, “whether it’s two white dwarfs merging together or one white dwarf accreting from a companion, we’re not absolutely sure what’s going on.”

By cataloguing objects like ZTF J1901+1458, which is only about 130 light years away, the researchers hope to get an idea of how many type Ia supernovae are expected in a given area of space, and to better understand the structure of white dwarfs and the fate of intermediate-mass stars.

Closely orbiting white dwarf pairs are also now thought to be the dominant source of gravitational waves in the universe and will be an important source of observations for future experiments like the Laser Interferometer Space Antenna.

The eventual fate of ZTF J1901+1458 depends on how its structure changes as it cools, which is actively being researched. Some models suggest that it will eventually collapse and either implode into a neutron star — or destroy itself in a supernova.

“They’re an exciting sort of object from a whole bunch of different angles,” said Heyl.