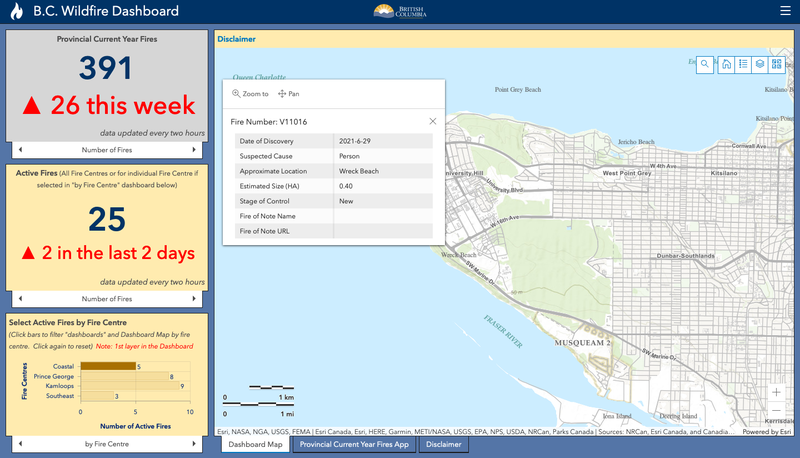 When a wildfire breaks out near you, best to take it easy and drink lots of water. Screenshot via BC Wildfire Service

The morning of June 29, a wildfire broke out near Wreck Beach on campus. While it was quickly put out, this event marks the start of wildfire season — and all the health implications that come with it.

Aside from the obvious dangers associated with a raging wildfire, the health effects of wildfire smoke can also be detrimental to one’s immediate and long-term health.

Where there’s a wildfire, there’s smoke. Wildfire smoke can lead to exposure to fine particulate matter, also known as particle pollution, according to a UBC study published last year. Particulate matter consists of dust, dirt and smoke that can reduce air quality and be detrimental to one’s health. Air quality can be checked for the North West region of Metro Vancouver, within which the UBC campus is situated, using the air health quality index.

Larger pieces of particulate matter can irritate the throat and eyes, but fine particles pose the bigger health risk, especially when they originated from wildfires. Fine particles can reach deep into your lungs, and have been correlated with worsened severity of respiratory and cardiovascular illnesses even just one hour after exposure, according to UBC’s study. The study also found that people with diabetes were susceptible to adverse health outcomes during wildfire season.

Wildfire smoke has even been predicted to increase the risk of adverse health outcomes from respiratory diseases, like COVID-19.

A good excuse to ‘take it easy’

Exposure to wildfire smoke may, or may not, affect you, according to HealthLink BC. According to the CDC, the most at-risk groups are pregnant women, older adults and those with preexisting respiratory or cardiovascular illnesses.

But even if you are far away from a wildfire, you still may be exposed to smoke. Symptoms of exposure can include “eye irritation, runny nose, sore throat, mild cough, phlegm production, wheezing or headaches,” according to HealthLink BC. If you experience these symptoms, you should reduce your exposure to smoke and, only if symptoms do not improve, seek medical attention.

Dr. Sarah Henderson, an associate professor in the UBC School of Population and Public Health, wrote a blog post, advising how one can cope with wildfire smoke. She recommended “taking it easy” to reduce your respiration rate and drinking lots of water. In other words, if a wildfire has broken out near you, it may not be the best time to focus on your gains.

What about my mask?

In an interview with Healthline, Marina Vance, an assistant professor at the University of Colorado, explained that cloth masks are not going to be ideal for protecting the user from wildfire smoke. Cloth masks are designed to capture respiratory droplets which are 10 to 100 times larger than smoke particles, explained Vance.

Curious about the efficiency of different types of masks against wildfire smoke? Have a look at the University of Colorado’s interactive Cloth Mask Performance site. Collection efficiency for fine particles, which are 2.5 micrometers in diameter or less, is best represented in the centre of the plot.

Though cloth masks are better than nothing, the best thing to do in the event of a wildfire near you is to avoid your exposure as much as possible. Even if you happen to have an N95 mask on you, now isn’t the time for a stroll near Wreck Beach.

To keep tabs on the wildfires in BC, check out the BC wildfire dashboard.