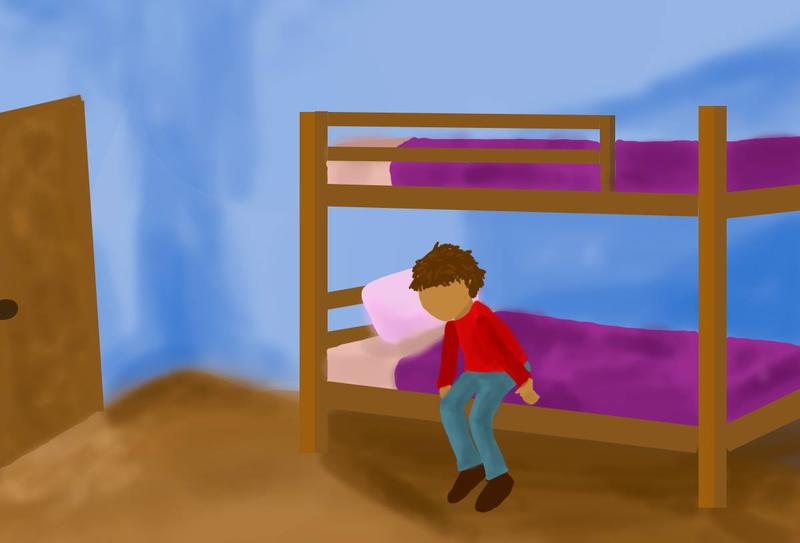 I’m sitting on the lower bunk in my new room, in my new home — the crash of policemen breaking down the apartment door ringing in my ears.

“Go to your room and stay there until I tell you,” said David, who used to be my father. Turned out he plucked me from my crib six years ago and spirited me away to the well-off part of town. There, we lived in a dingy apartment.

He gave me a bear hug and whispered, “I won’t leave you.” That was the last time I saw him.

At the edge of the table lies a folder, titled “Wonder Child Lottery Case.” Jutting out the side is a sliver of glossy card stock, and when I pull it out, a series of numbers follows suit. These are the numbers that made me. They told the dial-turning, button-pressing assembly line workers at the DNA Selection Lab what destiny to give me.

From the court hearings, I learned that David, and Angie — my new mother — and some other co-workers had pooled money together to win me. There were countless other tickets like that one, but this one was golden. Not a normal, above average, or gifted — but a Wonder.

The door opens. My new brother, Aiden, is home from school. He’s 10, two years younger than me; his backpack is emblazoned with the picture of a superhero. He stops when he sees me. His mouth opens wide.

“You look weird,” was the first thing he said to me.

I look down at my sweater vest and slacks, and I remember Will Stetson grinning from ear to ear as he strode down the foyer of Whiteside Academy. My Wonder Child friend.

“No, your real name. The one that Mom gave you.”

“I don’t know.” My eyes flicker over to the folder. The thought of opening it sends a wave of heat through me. The point of no return.

I conquer my fear and rifle through the paperwork, the congratulatory letter, the brochures advertising the latest advances in genetic engineering. Near the bottom is an official looking form, and beside the name Angie Stone is the name Gabriel Stone.

Aiden follows along, mesmerized. “I’ve got mine somewhere,” he says.

I sit in the middle of classroom flooded with gargantuan 12th graders, while the teacher goes on about the Civil War. Every so often, a venomous stare is pointed at my direction.

The teacher asks a question, and as he waits for an answer, his eyes flicker in my direction. I nestle my head inside my textbook, filling my peripheral vision with words that spoke to me in ways the normal kids could never fathom.

As class is dismissed, I try my best to blend into the crowd, but I’m quickly spotted. A boy shoves me against a locker.

“Screw you, genius. Why don’t you leave us alone?”

There was a time, I think, when the title of genius constituted something extraordinary.

Two weeks later, I follow Angie and her old colleagues into Franz’s Steakhouse. The gathering extends over two tables, and as I pass them on my way to the far end, they fix me with a legion of stares. They want to see if they got their money’s worth.

“On behalf of all of us here,” says the man sitting beside me. “I would like to propose a toast to celebrate the safe return of Angie’s Wonder Child.”

He claps me on the back. “You little piece of genetic joy.”

Glasses clink, laughs are exchanged, and I sit in silence.

“So, Gabriel,” says one of the women, turning to me. “You must be enjoying school here.”

She runs her fingers down my arm, feeling the muscles inside. “Tried out for any sports teams yet?”

I shake my head.

“Well hop to it, you shouldn’t waste the gifts you’ve been given.”

She turns back to Angie. “We’re all so happy for you, Ange,” she continues. “I couldn’t imagine what it’s like losing a child like that.”

“Let’s hope David gets the sentence he deserves,” says the man. “We need justice.”

The gathering agrees, and the room is soon flooded with accusations that still haunt me to this day. Psychopath, criminal, monster.

Our birthdays are in the same week. I remember how we celebrated them together. Opposite sides of a tiny table. Three, four, five candles flickering in the dim light. Then, it seemed we were the only two people in the world. Everybody else was a figment of our imagination.

When I get home, I rush to my bedroom and see Aiden sprawled out on the top bunk, his arm dangling over the edge. I enter the bathroom and sit on the toilet. Before long, Angie is banging on the door, demanding to be let in.

“Don’t be ridiculous, Gabriel,” she says. “You’ve got a family now. You should be happy.”

“I hate Gabriel. It’s a horrible name. And I hate it here. Everybody here thinks I’m some kind of freak.”

This scares Aiden, whose footsteps are followed by a choked, “Stay in your room.”

An unending silence fills the house. I look at the bathroom window, contemplating escape. Finally, I unlock the door and step into the hallway. All the lights are off. I enter my bedroom, feel around for Aiden’s outstretched arm, duck underneath it and pull the covers tight around me.

A year later, it’s the day of David’s funeral. He hanged himself in his prison cell five days ago.

The sun’s shining. Me and Aiden are standing outside the church, staring off into space.

Angie catches up to us and ushers us inside. The hall is quiet, save for a handful of people. The priest drones on, bestowing our collective memories of David with the usual praise.

I can’t keep my eyes off the coffin. It’s remarkably simple, just plain wood. But the more I stare at it, the more I can see David, his arms outstretched, waiting to take me home in his banged-up car.

Once it’s over, we’re standing outside the church. Aiden pipes up, “What was he really like?”

I glance over at Angie. Her head is down, watching a bee dance along the flowers.

Aiden’s eyes are fixed on me as I search for an answer that would do him justice.

“I can’t say for certain,” I say. “Everybody’s opinion of someone is different. He took care of me.”

That time was over, however. I look back at my mom and take her hand. A smile slowly forms on her lips. For once, I can smile back.