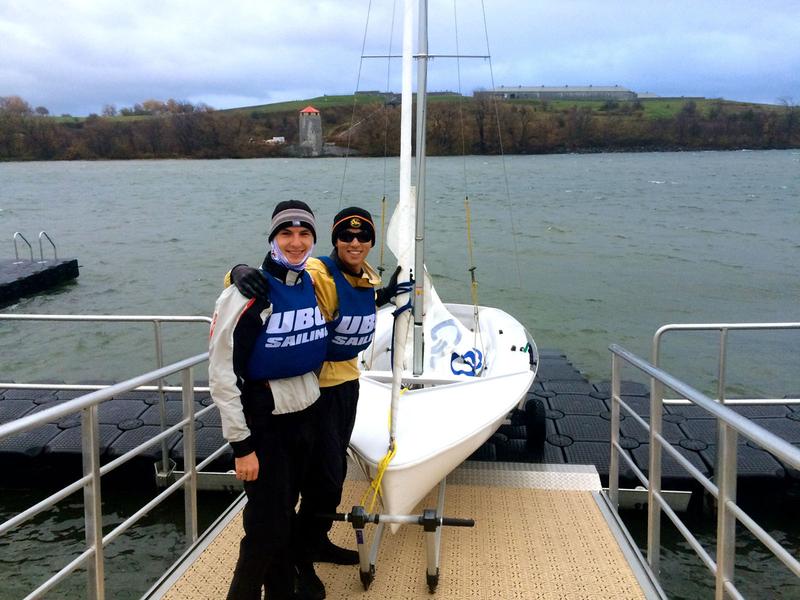 The UBC sailing team recently participated in the Team Racing Nationals at the Royal Military College in Kingston, Ontario. Fighting through big waves and heavy breeze, the team was able to earn an impressive second place finish.

“Last year, we came third and there was a big gap between first and second,” said Team President Ashley-Belle Burns. “It was about a 15 point difference, so we kind of knew we had no chance at first whereas this year we came in at least expecting third.”

At the competition, Burns and her three teammates — Hanno Kite-Powell, Greg Woollgar and Joseph Gustafson — competed in four races on their first day on a calm Lake Ontario and were tied for first place at the end of the day.

“We definitely did better on the first day because we train a lot in light winds,” said Gustafson. “Light winds bring a completely different game because no one’s really worried about flipping, so it’s very much about the little things you do [and] the little adjustments you make on the boat.”

The weather did not work in UBC’s favour on the second day. In seven races, the team sailed through 70 kilometre winds and 8-12 foot breaking waves. Working through challenging and unfamiliar weather conditions, UBC managed to finish just three points shy of Queen’s University — the winners of the competition. Despite coming heartbreakingly close to first place, Burns was pleased with her team’s efforts.

“It was so awesome to know we had a fighting chance to come first,” said Burns. “That we were winning races and that we were so close to Queen’s. We were tied for first up until Sunday afternoon.”

Having fought tooth and nail in the competition through difficult waters, Gustafson expressed the fact that, contrary to what people may think, sailing requires a great deal of athleticism.

“People don’t really realize how athletic sailing can be,” said Gustafson. “People think of sailing as people going cruising on yachts in the sun, but it’s not the case whatsoever. It’s really, really physically demanding on your whole body, combined with a huge amount of knowledge and mental skill which makes it a cool all-around sport.”

With the Canadian nationals now behind them, the UBC sailing team will now focus on qualifying for the United States nationals, which will take place in the spring.