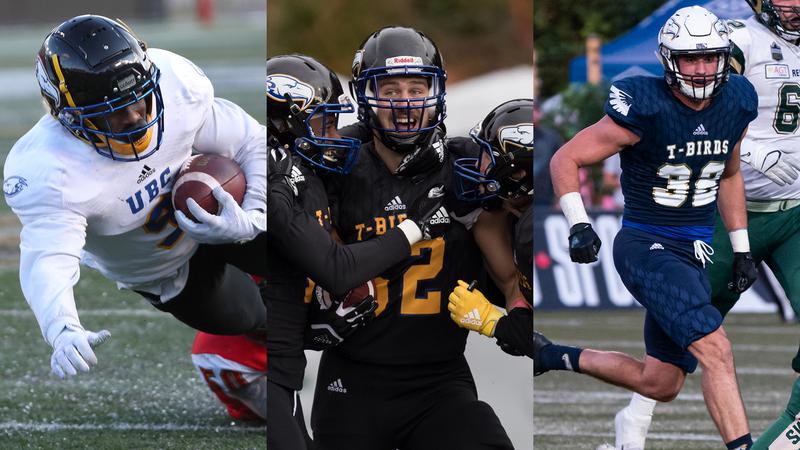 Another three UBC Thunderbirds add their names to the growing list of alumni to be drafted into the Canadian Football League this month.

Nick Cross, Ben Hladik, and Elliot Graham showcased the UBC defense, the linebackers now looking to the next level.

Nick Cross was the first T-Bird off the board, selected in the first round by the Hamilton Tiger Cats with the 9th overall pick. The Regina native becomes UBC’s first opening round pick since Dakoda Shepley in 2018.

“I'm extremely grateful,” Cross said, heading to the 2019 Grey Cup champions for the upcoming season. “I'm just ready to go represent the school and get some wins for the Ticats.”

Ranked as the 20th best prospect this year, Cross has an impressive resume: the All-Canadian boasting a country leading 66.5 tackles in 2019. He tallied a sack and interception, and now looks to make his mark in the CFL.

“It’s the best case scenario,” Cross said about joining the Tiger Cats. “I'll be under some good coaches on the defensive side of the ball and on special teams. It's going to develop me as a good player and definitely where I want to be.”

The linebacker also has high praise for the program at UBC.

“The high level of coaching I experienced [under] Coach Nill [and] Coach Pat Tracy, they have one of the highest amount of guys combined that have been drafted by a CFL team so that says a lot right there,” Cross said.

“I was under some pretty good coaches with a long legacy of success and I think they'll translate into the CFL as well with what I've taken from them and along with my personal journey.”

With the 22nd pick in the third round, the BC Lions selected Vernon native Ben Hladik. The linebacker gets a shot with the Lions, who finished a disappointing dead last in the West Conference in 2019.

“I've been waiting for this for a long time,” Hladik said about his selection. “It's a dream come true and I feel like I was really put in a good situation with the UBC coaching staff, athletic department and I’m just happy to make everyone proud,” he said.

A post shared by BC Lions Football Club (@bclions_official)

The two-time All-Canadian was second on the 2019 T-Birds team in tackles, finishing with 48.5, and was previously named 2018 Canada West defensive player of the year. The 16th ranked prospect is determined to make a name for himself with the Lions.

The defensive captain for the last two years, Hladik shares fond memories of his time with the Thunderbirds. “I don't think I could have went to a better situation than UBC, the coaching staff and our athletic training staff and the strength and conditioning.”

“I feel like everything was the perfect situation to put me in the position to be in the pros.”

Rounding out the UBC draftees was Elliott Graham, going to the Calgary Stampeders as the 29th pick. Finishing second in the West in 2019, the Stampeders look to rebound after a disappointing first round exit to the Winnipeg Blue Bombers.

Graham finished his U Sports career with an excellent defensive track record, highlighted with his 48 career solo blocks, 42 assisted blocks and a pair of sacks. He was recently invited to the western regional combine, clearly leaving an impression on the scouts.

The CFL has been on pause since the outbreak of the pandemic, cancelling its 2020 season. The League look to return to play in August, with the draftees reporting to their training camps with hopes of cracking the lineup. The UBC Thunderbirds also look to return to play in the fall, with recently released Canada West guidelines providing a framework for their football season.