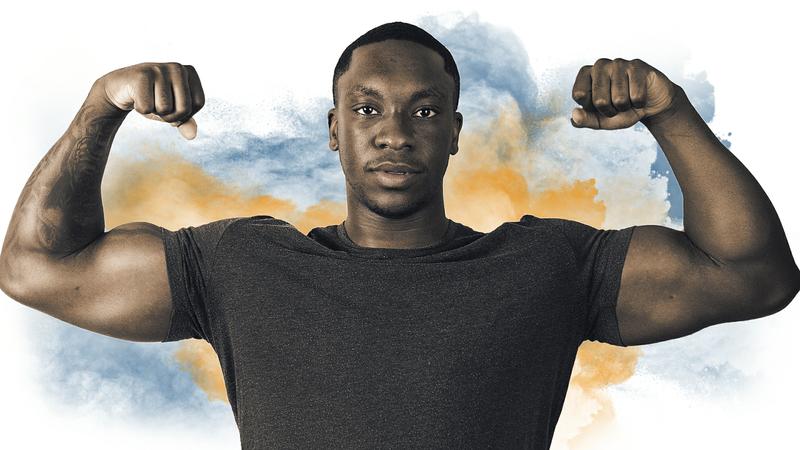 He’s 6’3”, 250 lbs and if you bumped into him in the hallway, you wouldn’t be able to miss him. Out on the field, missing him is what quarterbacks hope for.

This is the story of how relocation, a chance encounter and dedication all fuelled one UBC student’s dreams of going pro.

Originally born in Lagos, Nigeria, Charles Nwoye is the eldest of three children. When he was just one year old, his father’s work with Coca-Cola relocated the family to Accra, Ghana. After spending most of his childhood in the Ghanaian capital, Nwoye and his family returned to Lagos. Nwoye’s mother and father, a nurse and engineer respectively, began looking elsewhere for opportunities in their professional lives.

In 2003, a family friend visited them en route to the Canadian Embassy in Ghana. The friend was in the process of moving to Canada, something which prompted Nwoye’s parents to consider a similar move. By 2006, they had committed to moving to Edmonton, Alberta. Yet what should have been a tumultuous transatlantic move didn’t faze a young Nwoye one bit.

By all accounts, it was a seamless transition into Canadian society. The family even managed to reconnect with old friends in a small community in Edmonton.

“In the neighbourhood I lived in, there were quite a few Africans and Jamaicans, so it was a good mix of people and culture.”

After some time in Edmonton, Nwoye’s father found a job with Pepsi in Calgary, so the family relocated once again to Strathmore, an idyllic town 50 km east of Calgary. In the space of about a year, Nwoye had gone from living in a city of 17 million to a township of 14,000. Admittedly, there was quite a bit of culture shock.

“Strathmore was pretty much white, small country Alberta. It was really welcoming though, my mom loves it there.”

Staying true to himself, Nwoye didn’t make a big deal of it. Instead, he turned to one thing that remained a constant for his whole life: his love of sport. Since soccer wasn’t as popular in Strathmore, Nwoye was challenged with finding a new outlet to showcase his athletic skills.

“The first [basketball] game I ever watched was the Boston Celtics in 2007 with the big three, so I was like, 'I’ll cheer for this team'.”

Before long, Nwoye was the starting shooting guard for his local high school. When he became a senior, he was contemplating taking his talents to a post-secondary level. However, one of the caveats of living in a small town is low exposure for student athletes. Nwoye was a victim of such a scenario. Despite being good enough to ball after high-school, he never got enough attention to show off his skillset.

That’s when he got serious about weightlifting. Though he'd used weights in the past, Nwoye couldn’t find the time to lift regularly. This time around, Nwoye stuck with it and the results showed. He started to put out staggering numbers, including a 405 lbs bench, 515 lbs back squat and 605 lbs deadlift.

In 2013, he enrolled at the Dhillon School of Business at the University of Lethbridge. When he wasn’t hitting the books, Nwoye kept himself in peak physical shape. Even with his basketball career on hiatus, he understood opportunities often presented themselves in strange ways.

Such was the case at a track meet in May 2015. Nwoye, there to watch his brother, couldn't help to be asked what U Sports football squad he was a part of.

“They asked ‘what team do you play for?’ And I was, like, ‘I don’t play for any team, I’m just watching my brother here.’ Then they said, ‘You should really look into playing football’.”

At the time, Blake Nill was just starting his tenure as head coach of the Thunderbirds football team. As he always does, Nill was scouring the country for talent to join the program. Rather unusually, he got a tip from a former player on some talent in Strathmore.

The aforementioned talent wasn’t a polished high school star, but a buff former basketball player. Still, the tip was convincing enough for Nill to fly out to Strathmore and meet with Nwoye in person.

“When I heard he was coming, I was quite excited. This had never happened to me before.”

It was what Nwoye had been waiting for his whole life: a chance to prove himself as an athlete on a national stage. As it turned out, Nwoye’s first experience with football was one to remember.

“We were playing inside run. It’s a physical drill, offense versus defense. First couple reps were okay. Third rep, they [the offense] ran a trap and I didn’t realize it ... here I am thinking I’m gonna make my first play in football, and then this guard comes up and smokes me.” Nwoye admits he was naive at first, thinking his athletic ability would supersede his shortcomings in the technical game.

After adjusting to the regular bruising, it appeared Nwoye picked a good year to join UBC football. The 2015 season saw the ‘Birds lift the Vanier Cup for the fourth time in school history.

“That was one of the most awesome experiences of my life because that year we weren’t expected to go to all the way … All the media and CFL scouts were there. It was a cool experience.”

As Nwoye’s football repertoire expanded over his next few years, his role on the team remained relatively the same due to more seasoned and experienced players on the roster. Defensive end isn’t a glamorous position but Nwoye put his own spin on it. Stemming from his multi-disciplinary athletic background, he used the speed and acceleration of the three-point stance to beat bigger offensive linemen.

Nwoye made the tough decision to forgo playing for the Thunderbirds in the 2018 season and shift his focus onto academics. His girlfriend, on the other hand, had an alternative idea.

“She told me to believe in myself and to just keep going with it, so that I wouldn’t have any regrets in the future.”

Competitive football programs in Vancouver are limited. Besides Simon Fraser University and UBC, the Langley Rams were the closest option for Nwoye to continue playing ball whilst in his last year. The Rams are popular as an intermediary team between high school and college and it was the team Nwoye felt could give him meaningful minutes to showcase his hard work and to take his game to the next level.

In his first game as a Ram, Nwoye had 3 sacks and a forced fumble. He finished his lone season in the Canadian Junior Football League with 8 sacks in 6 regular season games, and 4 sacks in the 4 playoff games — numbers impressive enough to earn him an invitation to the CFL Regional Combine.

To prep for the Combine, Nwoye trained six times a week: 3 days in the gym and 3 on the field. He’s as disciplined in the kitchen as he is in the weight-room and advises any student athlete to stay consistent with their training regimen along with their diet. At UBC’s inaugural Pro Day he showcased his skills in front of CFL and NFL scouts, posting a 4.69 second 40-yard dash, a 9’11” broad jump and a 33.5” vertical. Those results place him within the top-6 of NFL Combine participants.

Nwoye is now awaiting the NFL draft on April 25, 2019, and the CFL draft on May 9, 2019 and, although he loves Vancouver, he doesn’t mind playing elsewhere. After all, he lives by the motto “life is 10 percent what happens to you, and 90 percent how you react to it.”