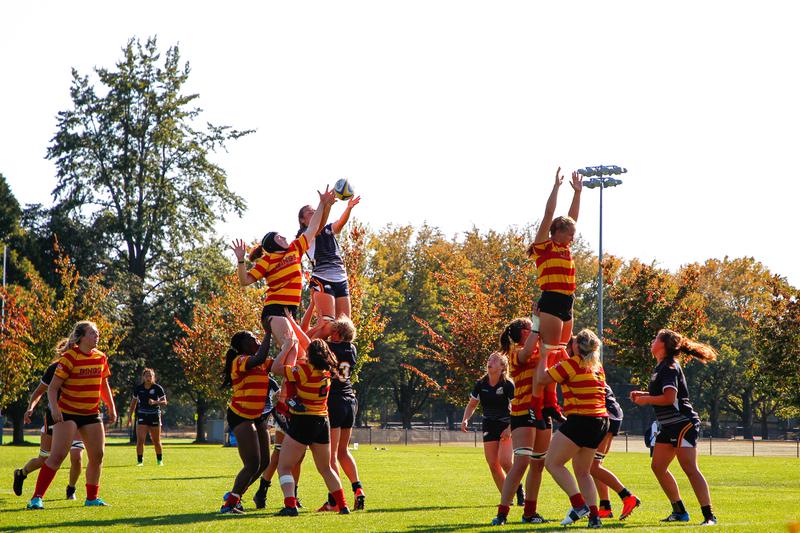 It's the team's first conference championship in its 20-year history. File Elizabeth Wang

Gillian Boag opened the scoring for the Thunderbirds with a try while Shoshanah Seumanutafa was successful on a conversion attempt to give the ’Birds a 7–0 lead.

Seven minutes later, the Vikes responded with a try and conversion of their own to tie the game at 7–7. Seumanutafa would score a try of her own at the 36th minute and make a successful conversion to put the ’Birds up 14–7 going into the halftime break.

Breanna Aikens would score a final try for the ’Birds and another conversion by Seumanutafa gave the ’Birds a 21–7 lead.

They would hold on to that lead for the rest of the game, keeping the Vikes at two tries. A missed conversion on their first meant it kept the ’Birds up by two points and gave them the win at 21–19.

With the first half of the upset complete, the ’Birds now faced the University of Calgary Dinos in the Canada West final. The Dinos finished in first place in Canada West but only squeaked past the Pronghorns 8–7 in the other semi final.

Down 12–5 at the half, the ’Birds came out swinging and scored 21 points in 21 minutes off a penalty try and two more by Boag and Rachel Smith respectively. Seumanutafa would be successful on both conversions, leaving her perfect all throughout the weekend. She was crowned 2019 Canada West Player of the Year, the first T-Bird to be given the honour.

The Thunderbirds will now travel to Ottawa on October 30 for the U Sports National Championships.