Bringing the thunder: The voice behind the Thunderbirds hype man

The first time Nico McEown stepped onto the court at War Memorial Gymnasium, he was trying out for the men’s basketball team. While he wouldn’t make the team, the experience would still provide him with an opportunity to get involved with UBC athletics.

The first time Nico McEown stepped onto the court at War Memorial Gymnasium, he was trying out for the men’s basketball team. While he wouldn’t make the team, the experience would still provide him with an opportunity to get involved with UBC athletics.

He approached Kevin Hanson, the men’s basketball coach, to see if the team needed an announcer for their home games. Although the role was filled at the time, Hanson did put him in contact with the athletics director who arranged another tryout for McEown. This one would prove to be much more successful.

“I wasn’t exactly sure what to do,” McEown recalled. “But then when I was at the stadium doing the audition it just came out.” The tone of his voice quickly changes to a deep bellowing sound as he recites the familiar phrase: “Ladies and gentlemen, welcome...”

Seated in the lobby of War Memorial, five years after that basketball tryout and audition for PA announcer, things seem to have come full circle for Nico McEown. He’s graduated with a degree in creative writing, yet he’s still a regular sight at War Memorial Gym, hyping up the home crowd with classics like the T-Bird t-shirt contest. 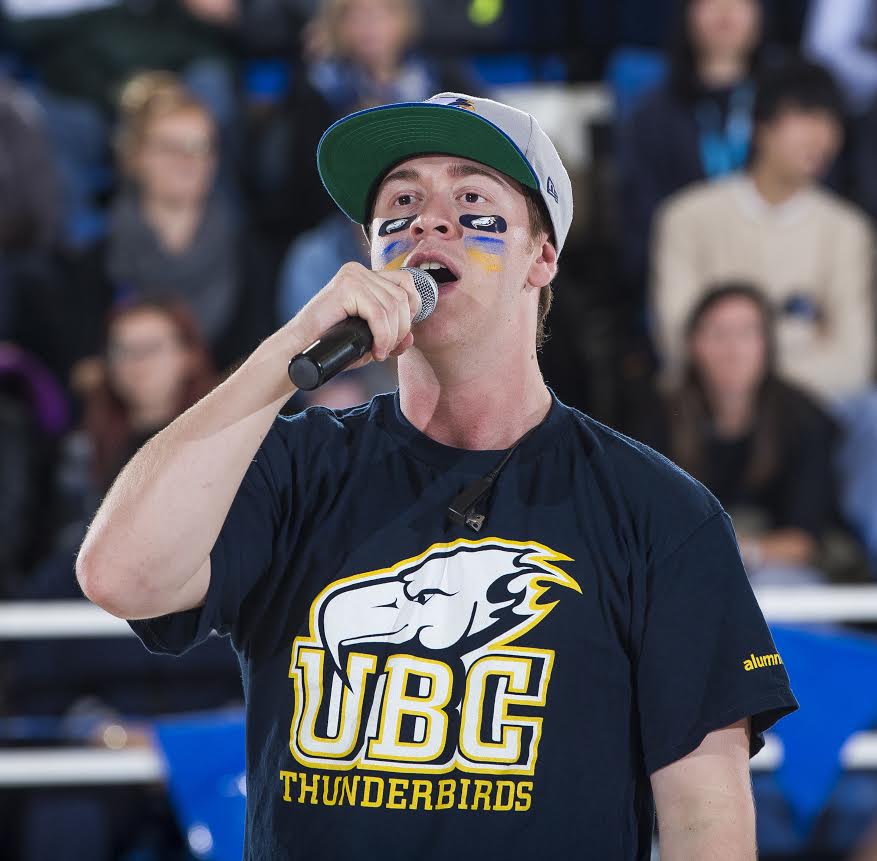 A proud alumni of Magee Secondary School in Kerrisdale, McEown initially chose UBC because it was close to home. He started in the acting program before switching to creative writing, yet his experience from the former would pay dividends when he eventually became the ‘Birds hype man’.

“I [did] film and television but I also did theater so no stage was nerve wracking for me, so that was a huge bonus,” he says.

It also helped that he was a sports enthusiast.

“My background is as an actor so I always liked performing,” he said. “And I love sports, so once I found out that this was an actual [job] I could do I was like ‘that’s literally all the things that I like.’”

Although he would start out as the announcer for soccer games, when the season was over he was asked if he could do ‘hype stuff’ for other sporting events on campus. Always “happy to have a microphone,” McEown jumped at the opportunity and quickly became a regular at Thunderbird home games across a multitude of sports.

There was still, as McEown admits, a significant learning curve to the new job. Whereas an announcer is responsible for informing the crowd about who scored or got penalized, a hype man is supposed to energize the crowd whenever there are breaks in the game.

While many college students may think that they could also do ‘hype stuff’ at games, the role as hype man is a lot more nuanced and there are a lot of details that the average fan might not notice.

For one thing, microphone etiquette is critical. In order to avoid any slip-ups, a script is written that includes mentioning sponsors of the team as well as chants to engage the crowd. But microphone etiquette can still be difficult, especially when you are in front of raucous fans of all different ages.

In addition to that, the daily schedule of a hype person also varies depending on the team. With McEown having worked for both UBC and the newly rebranded Vancouver Warriors professional lacrosse team at the Rogers Arena downtown.

“Here [at UBC], we arrive with all the other event staff at about two hours before the game and we’ll go over a bit of the script, we’ll set up like our outdoor lobby area and then we’ll kind of get into it,” he said. “Whereas with the Warriors, we have a production meeting about four, five hours before the game. We go over like the entire game script — we usually have a lot more in regards to sponsorship aspects and the key things. Then from there I would go onto the pre-tape, which we do at the team store, and then from the pre-tape we go onto dress rehearsal then we go to a dinner break and then it’s pretty much time to get ready for the opening of the game.”

Yet if one can handle the workload, there are also many benefits to this position. The job helps establish connections within the sports media circle that can lead to working at higher profile events.

For instance, working at UBC allowed McEown to work not only with the Warriors, but also work at the International Ice Hockey Federation (IIHF) World Junior Championships in Vancouver this past winter.

“One of my co-workers at UBC messaged me on Facebook and was like ‘Hey, do you know that the Warriors are looking for a hype man?’ I was like ‘No I didn’t know that.’ I applied, I got that gig and then only after one game, which I didn’t do great for the Warriors, they were like ‘Would you want to do some of the hockey championships?’ and I was like ‘Yeah!’

“I was only supposed to do like, I think, three games but I ended up doing the whole tournament except for one day,” he says smiling while shaking his head.

“I got to see the gold medal game and it was just like a once-in-a-lifetime experience.”

The good news for McEown, as he transitions from UBC into the workforce, is that hype men are seemingly becoming more prevalent in professional sports across North America.

As a result, the role of hype man is expanding and more responsibilities are being given to this job.

For instance, it is now commonplace to see player introductions in the National Basketball Association (NBA) being done by hype men instead of an announcer because hype men tend to provide the crowd with more energy.

“The crowd likes being able to see somebody,” McEwon said when describing the effect of hype men.

“It’s cool to have that voice in the sky — really important for key announcements and logistical stuff, but the crowd wants that person they can draw energy from and bring it back to.”

“I’m really excited that it’s becoming more and more of a thing.”