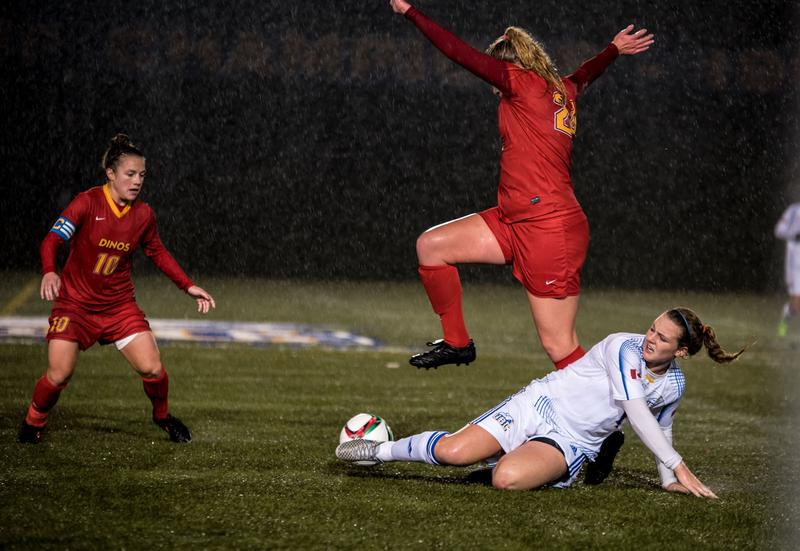 The weather wasn't helping either team.

The Thunderbirds women’s soccer team are moving on to the CIS semi-finals after a nail-biting 1-0 win over the Calgary Dinos Thursday night.

“The first half wasn’t our best football, but we kept ourselves in it ... second half we got back to doing things that got us this far,” head coach Marisa Kovacs said post-game.

UBC had one of the first threatening attacks of the game early in the half when forward Jasmin Dhanda picked out fellow striker Amrit Berar crossfield. The play ended in a run of two corners for UBC as it was finally stopped at the hands of Dinos keeper Samantha Chang-Foidl after a weak shot floated in from the top of the box.

Soon after, the T-Birds continued towards the Dinos net with a Madison Guy throw-in deep in Calgary territory that went out for a corner. UBC’s Taylor Shannik stepped up to take the corner kick, which narrowly missed the head of teammate Kym van Duynhoven.

Calgary countered at the 28 minute mark when Lauren Vernon got in between a UBC play and put a hopeful through ball towards midfielder Maddie Lee. UBC goalie Olivia de Goede managed to pick off the pass and easily stopped the Dinos progression.

Ten minutes later, the Dinos again forced some UBC defending when defender Remi Guindon knocked a free kick in from the halfway line. Landing in a scramble of players, the ball was cleared by UBC only as far as Calgary midfielder Lee. Lee's heavy first touch rolled into the path of a UBC player who put the ball safely upfield.

With the half-time whistle, UBC and Calgary were still scoreless and had yet to test their goalies.

Around the 70 minute mark, UBC brought the crowd to life after Chang-Foidl fumbled a short pass towards net by T-Birds outside defender Meagan Pasternak. Unfortunately, an offside whistle called an end to the scramble in the box and the game remained scoreless.

The best chance of the match came 10 minutes later when a rocket of a shot from Berar was blocked by Chang-Foidl and picked up again by UBC’s Shayla Chorney who let fly on the Dinos goal again. The Calgary keeper stood up to the challenge, but was taken down after making a quick save, requiring minor medical attention before continuing the game.

Although UBC had control of the second half, it wasn’t until the dying minutes of the match when the Thunderbirds finally managed to get a much-needed goal. In the 90th minute, Taylor Shannik knocked in a free kick from just outside the top right corner of the Dinos box — van Duynhoven got her head to it and put the ball in the back of the net for her second goal of the season and what would end up being the game winning goal.

With that, the Thunderbirds saw the game out and took the last spot in the CIS semi-finals with their 1- 0 win.

“[It’s our] third time playing Calgary. It can be tough to beat a team three times, but we kept our game plan and we’ve had this belief in ourselves all season,” Kovacs said. “Up until the 90th minute, we truly believed that we could get the result and, in the end, Kym put a great ball in the back of the net for us and [we’re] one step closer to our final goal which is winning the national championship.”

“It felt unreal, I don’t score many goals and I’ve been waiting for a header goal for a while this year ... that was just the perfect time to do it,” van Duynhoven said. “It felt unreal to have my teammates around as well.”

"[The semifinal has] been something we’ve been working towards all season, so it’s definitely exciting for us," van Duynhoven said.

“We’re super excited,” Kovacs said. “We hope the fans will come support us Saturday and hopefully we can give them another good showing!”

The T-Birds continue their run to the championship final this Saturday at 4:30 p.m. at Thunderbird Stadium.