After sweeping Huskies, women's hockey sits at top of league 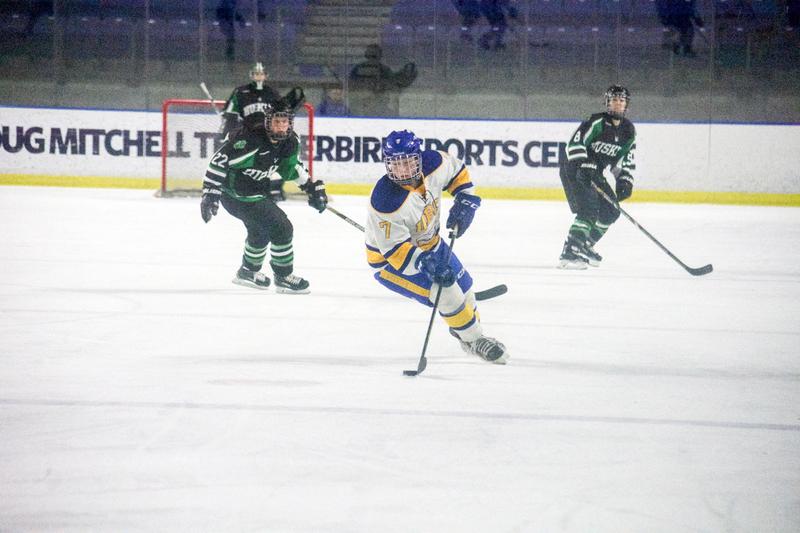 After a well deserved bye-week, the UBC Thunderbirds women's hockey team extended their winning streak in a double victory against the University of Saskatchewan Huskies this weekend. With a 1-0 overtime victory on Friday and a 4-3 win on Saturday, the ‘Birds now sit in first place in the Canada West League.

First year Mathea Fischer was key in UBC’s Friday night win. After three scoreless periods, the rookie beat Husky goalie Cassidy Hendricks in overtime after a penalty for slashing sent Saskatchewan’s Hanna McGillivray off. Hendricks stopped 28 of the 29 shots fired by UBC and her T-Bird counterpart Danielle Dube earned her first shutout of the season with 19 saves in the night.

The ‘Birds outshot the Huskies 29-19 on Friday night, which made for some pretty awesome plays. An opportunity arose in the first period where ‘Birds Nicole Saxvik managed to break away and face off Hendricks, but Saxvik couldn’t capitalize and her first shot was denied as well as the rebound.

In the second period, Husky Kori Herner nearly broke the 0-0 tie after her break away, but T-Bird rookie Mikayla Ogrodniczuk proved to be vital as she dove and extended her stick to prevent the forward from scoring. The puck then got away from Herner and Dube were able to ward off the offence.

The ‘Birds were able to repeat their victory on Saturday night with a resounding 4-3 victory. With this weekend, the ‘Birds now sit at the top of the league with a 6-2-3-1 lead. Saskatchewan is currently third in the league with a 5-3-2-2 conference record.