T-Birds rebound to beat Western and claim U Sports Bronze 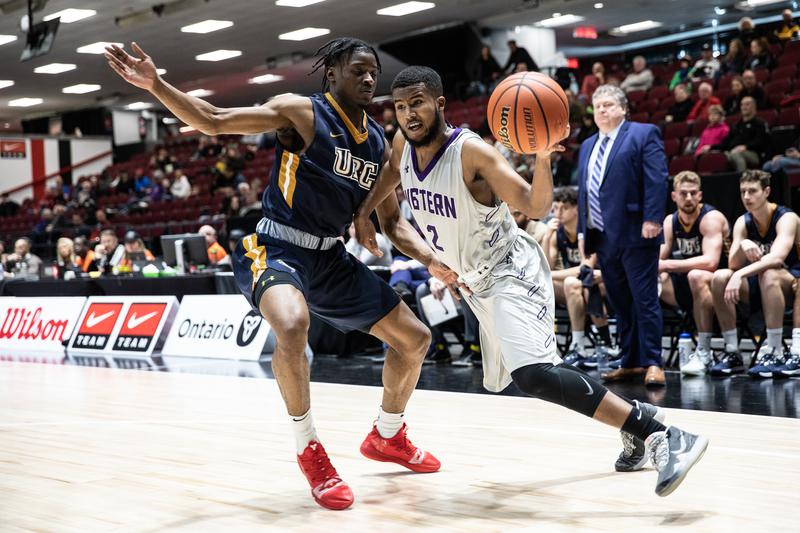 The UBC men’s basketball team kicked off their quest for the U Sports championship against the Bishop’s University Gaiters Friday afternoon, cruising to a dominant 103–66 victory.

For the second straight game, the Thunderbirds got off to a fast start and led 15–0 less than five minutes into the first-quarter. Bishop’s finally got on the scoreboard when Connor Kelly converted two free throws after getting fouled by UBC guard Manroop Clair.

The Gaiters took advantage of some Thunderbirds fouls by scoring their first five points from the free-throw line, energizing the Bishop’s favouring crowd. However, the quarter would finish with UBC leading 31–13 thanks to a buzzer-beating three from Grant Audu.

The second quarter was more evenly contested as UBC appeared to lose their focus which led to a few threes from the Gaiters, cutting the lead to 10. The Thunderbirds would luckily regain some composure and lock down defensively as halftime arrived with them leading 41–28.

Unlike the Canada West final against Alberta, the Thunderbirds managed to keep their foot on the pedal and build on their lead in the second half. After a quiet start to the game, UBC sharpshooter Jadon Cohee exploded in the third quarter with 12 points and a couple of assists. Both squads exchanged a flurry of buckets in the final few minutes of the quarter, as the two teams hit seven combined threes in the final three minutes of the third.

With the Thunderbirds leading 75–49, both teams played at a very relaxed pace in the final frame. However, Audu limped off to the bench after landing awkwardly from a layup attempt just over three minutes into the fourth. A disappointing end to the night for the UBC guard after scoring a season-high 25 points. For the final few minutes of the game, both coaches elected to rest their starters as the Thunderbirds moved on to the U Sports semifinals with a 103–66 victory over Bishop’s.

Unfortunately, after scoring at least 70 points in every game so far this season, the Dalhousie Tigers limited the UBC offence to a mere 55 points en route to an 84–55 blowout victory.

Contrary to the final score, the opening quarter was tightly contested. Clair was the first to get on the scoreboard with a three just over a minute in, as both teams limited opportunities by playing great defence. The two squads employed opposing playstyles, as the Tigers scored most of their points in the paint while the Thunderbirds patrolled the perimeter and took lots of three-point attempts, with Clair hitting two more before the end of the quarter. The first came to a close with Dalhousie up 16–14 in one of the lowest-scoring quarters of the tournament.

The floodgates opened in the second as the Tigers continued to score in the paint while playing stifling defence on the Thunderbirds. On a few possessions, Dalhousie double-teamed UBC’s ball handler before they even crossed halfcourt, resulting in turnovers that led to easy baskets for the Tigers. With Audu playing on a bad ankle and Shepherd struggling to find his rhythm against the physical Dalhousie defence, the Tigers dominated the second and led 41–29 at halftime.

The game didn’t get any easier for the Thunderbirds in the second half. After Clair hit his fourth three of the game a minute and a half into the third, both teams started to get physical as numerous charges were called. The Tigers’ defence continued to suffocate UBC, forcing them to take contested shots with only seconds left on the shot clock. After hitting back to back threes to end the third, Dalhousie’s lead grew to 61–48 going into the final frame. Not willing to give up, UBC pressured the Tigers early in the fourth but continued to struggle to generate offence. Instead of protecting their lead, Dalhousie continued to press, hitting threes and dominating the paint as they cruised to an 84–55 win and advanced to the U Sports final.

Even though their hopes of being national champions were crushed, the Thunderbirds managed to defeat the Western Mustangs 99–82 in a spirited bronze medal game.

Cohee opened the scoring just seconds into the match by hitting a three. The two teams traded quick possessions in a fast-paced first quarter. Luckily for UBC, Grant Shephard was able to regain some confidence after a rough game against Dalhousie as he scored back to back buckets to help the Thunderbirds jump out to a 24–17 lead. However, the following quarter would prove to be a different story, as Western went on a 11–0 run to start the second and hit a few threes in the final minutes to lead 45–41 at halftime.

The game would get more testy in the third and fourth quarters, as both Shephard and Cohee were forced to sit for large portions of the half due to committing too many fouls. Thankfully for UBC, Clair caught fire and finished the game with a season-high 38 points, making six threes on nine attempts. Western struggled to generate offence for the remainder of the game as the Thunderbirds emerged victorious to win the bronze medal at the 2020 U Sports championships.