Bike Rave was a festival of lights, bikes and music 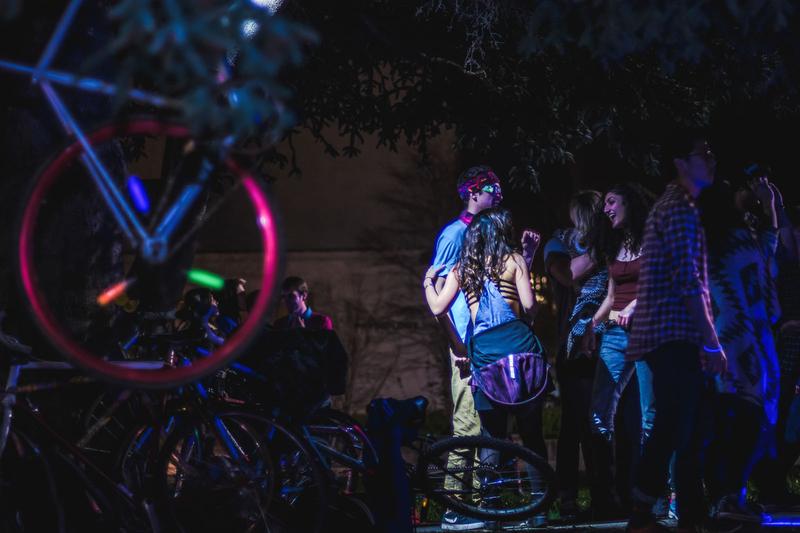 A swarm of bicycles covered in fluorescent lights took to Main Mall last Friday in UBC BikeRave, accompanied with speakers on chariots blaring out dance music.

This student-run event — in which bikers complete a route on UBC's campus and stop at several locations to have a dance party — has become an annual thing since several Place Vanier resident advisors came up the idea for it a few years ago.

The night started at 7 p.m. at Koerner Plaza and was welcomed to all for free. There were several booths set up by organizations such as Bike Kitchen and CiTR. There was also a booth by BikeRave that gave out free valve cap lights and various other goodies. In the middle of the Plaza, there was a DJ, strobe lights and a dance floor. Bikers danced to the mix dressed in bright colours and onesies, turning their bikes upside down to spin their light-decorated wheels.

At 8 p.m., the bikers, skateboarders and one man on a unicycle started the route. With everyone's bikes decorated with lights — thanks to BikeRave donators — the bikers looked like a mesmerizing ferris wheel when biking around the first part of the route — the Rose Garden roundabout.

With BikeRave organizers watching over the group, the riders biked around the Main Mall area, stopping at various locations that were considered the best spots to dance. The most notable was the the unlit area behind the clock tower. With bike lights set up to create strobe lights, the place looked like a club aside from a bright moon instead of a ceiling.

The last stop was in front of the Nest where bikers were met by a DJ and smoke machines. They were welcomed to dance until they were ready to go the BikeRave after party hosted by Party Well.

Even though the turn out of BikeRave was lower than expected, the feeling of swooping up and down the campus hills under the night sky with a fun group is like the feeling Emma Watson felt when going through the tunnel in The Perks of Being a Wallflower.

That feeling is infinite.