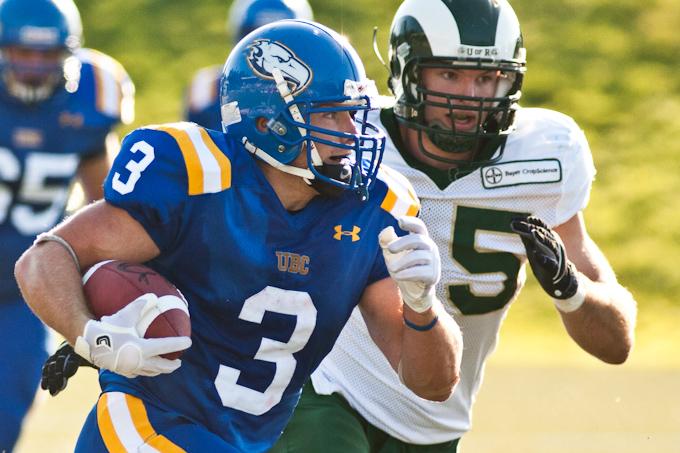 After narrowly clinching the playoff spot, the Thunderbird football team defeated the top-ranked University of Regina Rams 40-34 in the Hardy Cup semifinals to earn the ticket to the finals.

The game was a close match-up, and a showcase of the two teams’ quarterbacks and receivers. UBC’s Michael O’Connor and Regina’s Noah Picton were neck-in-neck in passing yards, with 397 and 364 respectively. On the other side of the ball, T-Bird receiver Will Watson finished the night with 116 receiving yards, while Rams receiver Riley Wilson caught 184.

The first period started with strong defensive plays by both teams, which kept the game scoreless until the final three minutes of the first period, when Regina’s William McGee kicked a 19-yard field goal. With 30 seconds remaining on the clock, T-Bird kicker Greg Hutchins answered with a 40-yard field goal to even things up at 3-3.

After the low-scoring affair in the first period, the second quarter saw some of the game’s momentum pick up. Midway into the second frame, Hutchins scored another field goal to double UBC’s lead to 6-3.

Less than a minute later, the ’Birds successfully blocked a punt at the Regina 35-yard line. T-Bird linebacker Colton Zayshley then picked the ball up and ran it 27 yards into the Rams’ end zone for UBC’s first touchdown of the game.

In the final three minutes before halftime, UBC’s Marshall Cook and Regina’s Atlee Simon both scored touchdowns, making the score 20-10 in favour of the T-Birds.

Scoring in the third frame then opened with a team safety by UBC before McGee picked up his second field goal of the game. With a little over four minutes remaining in the third, T-Bird running back Ben Cummings pulled the team ahead by another touchdown, capping off a 75-yard drive on nine plays. On the ensuing Rams possession, T-Bird defensive lineman Treymont Levy forced a fumble on the Regina 29-yard line before Hutchins kicked another field goal to bring UBC up 32-13.

At the start of the final quarter, David Mann caught an 11-yard pass from O’Connor to extend the ’Birds' lead to 39-13. Midway into the frame, the Rams answered with a drive that saw Wilson pick up 75 receiving yards, which ended in yet another touchdown for Simon.

Despite trailing 40-20, the Rams continued to show resilience. Simon and Ryan Schiebein scored two touchdowns in the final two minutes of gameplay to make the final score 40-34 in favour of the T-Birds.

UBC will continue its road trip next week to play against the University of Calgary Dinos in the Hardy Cup finals.