'Birds fall to Ryerson at home 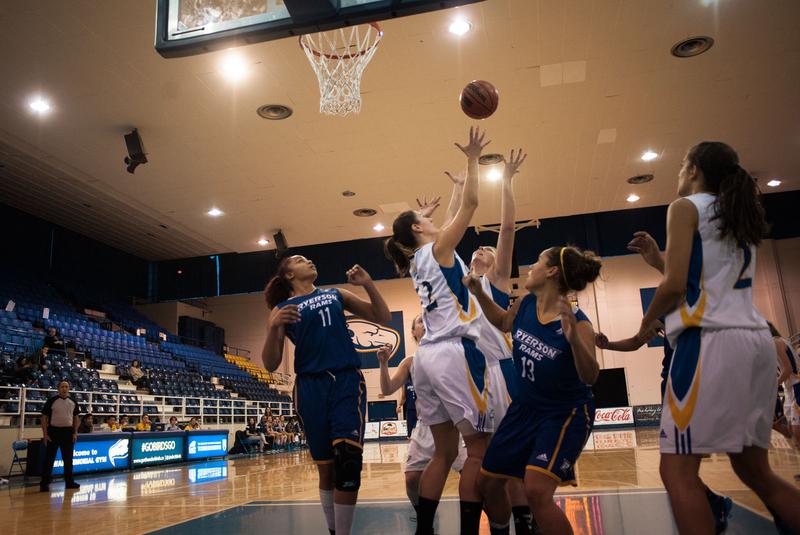 Women’s basketball suffered a rough loss against the Ryerson Rams, 76-66, coming back from an almost 20 point deficit due to some solid individual performances.

The game followed a disappointing weekend for the 'Birds in Toronto at the Ryerson Darcel Wright Memorial Classic where they beat the York Lions 58-52, but lost to the Guelph Gryphons and the University of Laval. In both, UBC trailed by 10 points.

“It’s a new team. There are a lot of people trying to fit into different roles and step into new responsibilities,” said Assistant Coach Carrie Watts. “The results maybe aren’t what we wanted … but I think everybody is pretty understanding that it’s still early on in the season and there will be kinks to work out.”

The first quarter saw the Thunderbirds get out-shot by Ryerson, as well as having a hard time sinking baskets. The score was 20-8, but notable third-year Shilpa Khanna made a great assist to veteran Susan Thompson right under the basket who then hooked it in. First year Jessica Hanson followed and took the foul shot to get full points.

The second quarter started off with Khanna earning the first points of the quarter in a hard drive to the hoop from the top of the key. Fifth-year Dian Lee really came alive, scoring three shots and halving the gap from the first quarter. The T-Birds crammed most of their points into the last two minutes bringing the score to 37-23.

“We showed a lot of fight in the second half. We got down by almost 20 at a couple different points in the game.... We gave ourselves an opportunity to win, but it was just too big of a whole to dig ourselves out of," commented Watts.

In the third quarter, the game was dominated by senior Kara Spotton who scored 12 points in the quarter. Also impressive was the shot by Lee after a textbook fake on her defender that left the path to basket wide open. Third year Cherub Lum kept a tight defense and was bowled over, losing her shoe which remained lost until the play was over.

The score was 59-40 at the beginning of the fourth. Fifth-year Adrienne Parkin kicked things off with a three-pointer from near the baseline. The team cleared the court for Lum who took it all the way to the basket and scored. Spotton kept bringing it — at one point catching a turnover and dribbling in with zero opposition from the Rams. But the best shot of the game was when Spotton, who was under the basket, lobbed the ball backwards into the net while being dragged to the floor by multiple guards.

The game was beginning to look close with only 1:30 left and T-Birds were only down by three after Spotton sank another three pointer with 40 seconds on the clock. But Ryerson did not break under the pressure and the 'Birds fell 76-66.