A young Canada Sevens squad took to the pitch at BC Place this past weekend at the World Rugby Sevens Series. Nine out of the thirteen players on Canada’s lineup were making their international debut, and although they came in sixth, there was much potential on display.

This was the first step towards the 2023 Rugby World Cup, hosted in France. Much of Canada’s young talent had a chance to really showcase their talents, and prove to the coaches that they were deserving a spot with Canada’s 15’s team.

Among the Canadians were UBC Thunderbirds Phil Berna, Nicholas Allen, Jack Carson, Matthew Percillier, Elias Ergas and Andrew Coe. Here’s how they looked this past weekend.

The most experienced player on Canada’s roster showed exactly why he earned a spot in 26 events for the national team. Berna scored Canada’s opening try of the tournament against Germany, setting the tone for things to come.

“It was half set, half off the cuff,” said Berna.

His veteran voice and leadership was needed on this young team, helping to bring them together and show what it meant to be wearing the maple leaf on the international stage. Berna only scored that one try the entire two days, but he was third on the team in runs made with 17.

“We knew we had good young guys coming off the bench, but we just had to set that platform ... so we just want to provide a good structure around them so they can shine,” said Berna. 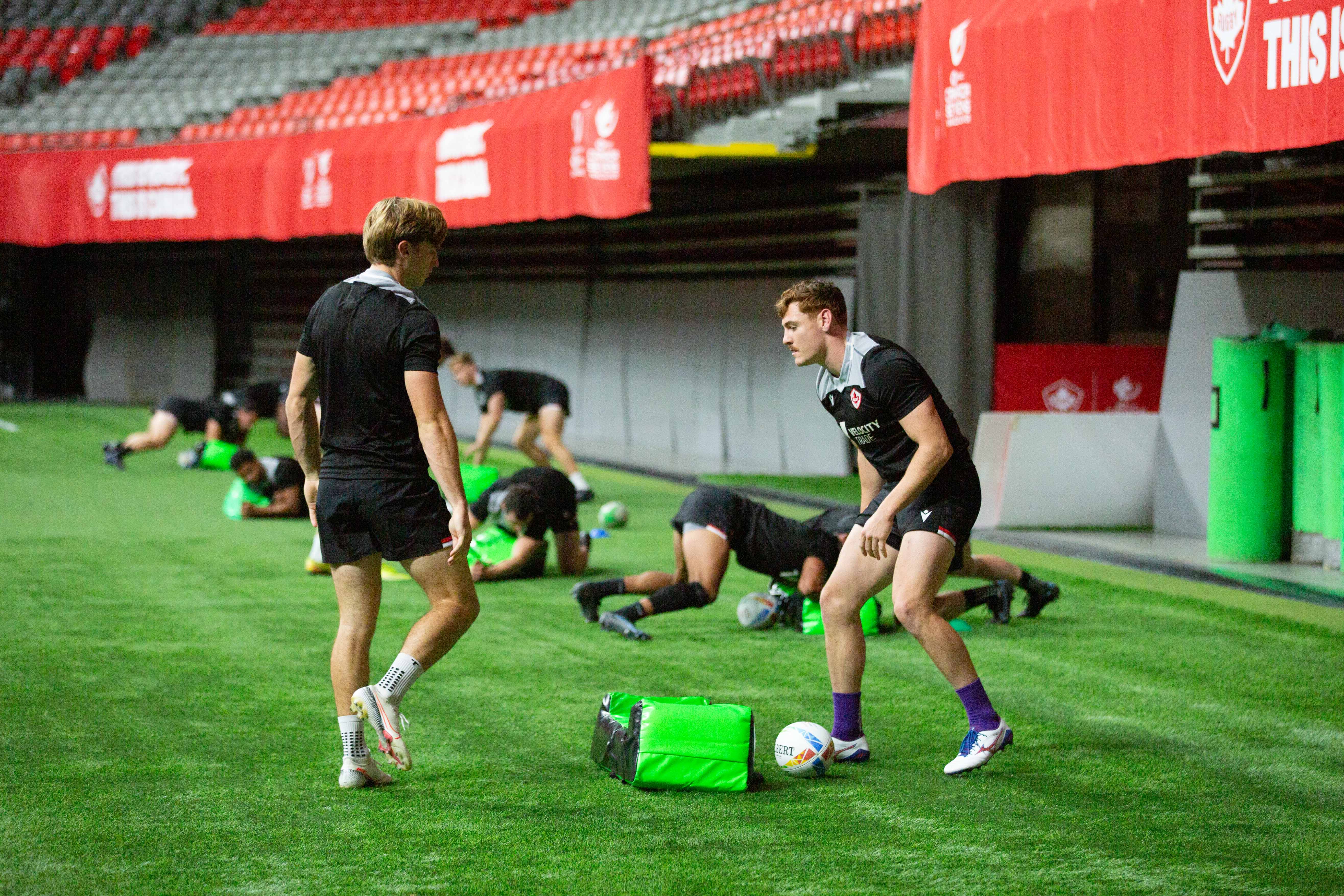 Berna's veteran voice and leadership was needed on this young team, helping bring them together. Sophie Galloway

Berna also helped in many other ways, making key offloads to set up his younger teammates to score tries on their own. A beautiful offload that led to a Matthew Percillier try against Chile really signified the role Berna took, a thankless but crucial cog in the Canadian lineup.

“New guys coming on, staying disciplined in our systems, and just staying connected and working for each other. But I mean, a lot of debuts out there so it's only going up from here,” said Berna.

Nick Allen was one of the many rookies making their international debut with Canada this tournament. The T-Bird made an appearance in every single match, coming on as a substitute for the first three games before starting against Great Britain in the Quarterfinals. 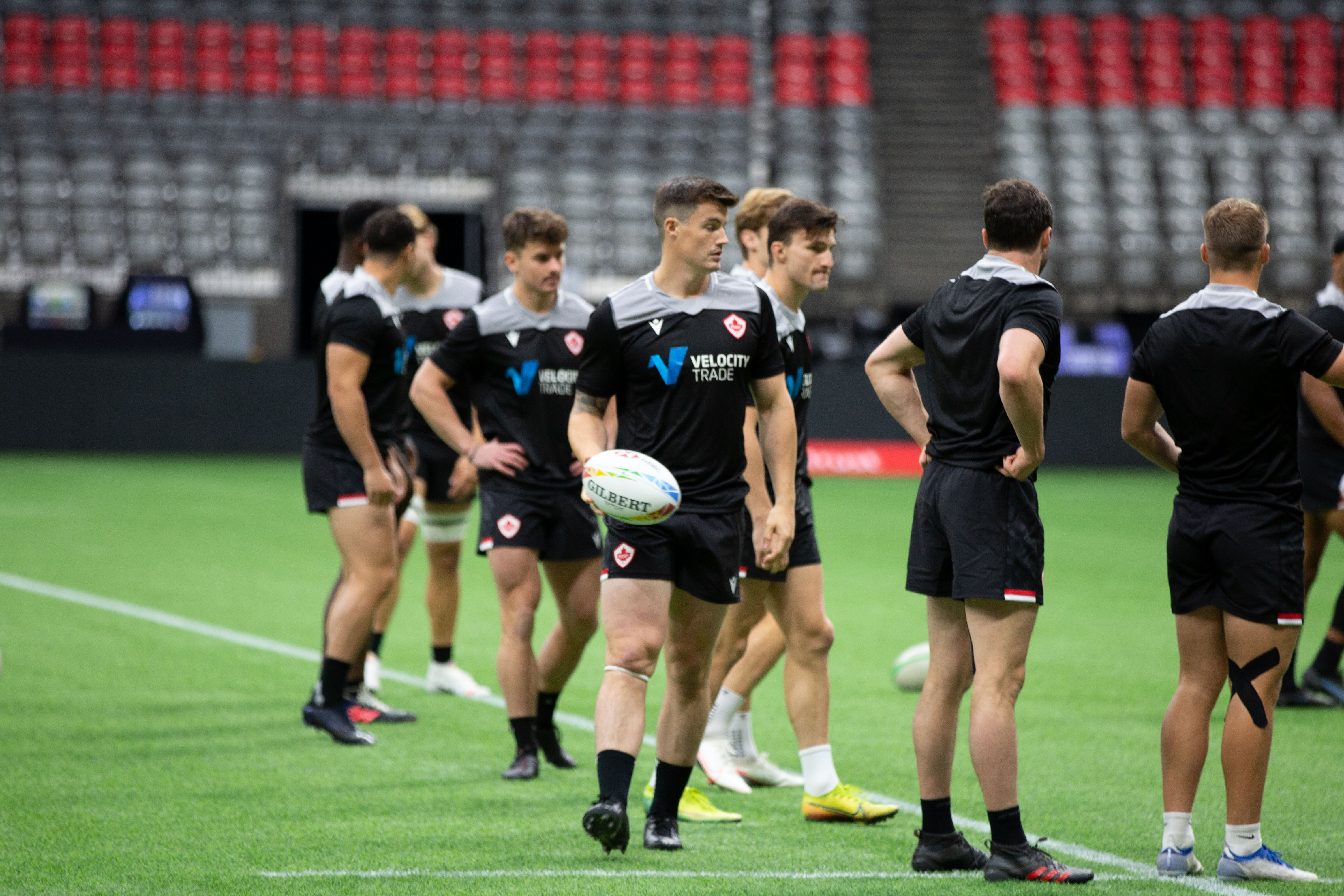 Nick Allen was one of the many rookies making their international debut with Canada this tournament. Sophie Galloway

Allen scored his first international try against Spain the very next match, opening up the scoring in the fifth place semi-finals in which Canada won 33-19. Allen made a good first impression with the national team and should be getting more shots to impress in the future.

Carson was one of the revelations of Canadian Rugby throughout the tournament. Starting each and every match in Vancouver, the third-year Sauder student opened his tab against the USA in the final match of day one. Though Canada would lose that game 29-19, it was a sign of things to come for Carson.

Carson impressed in the playoff stages for Canada, tallying a further two tries against Great Britain and the States. Carson showed himself as a dynamic player, making runs and smart passes in each and every match. 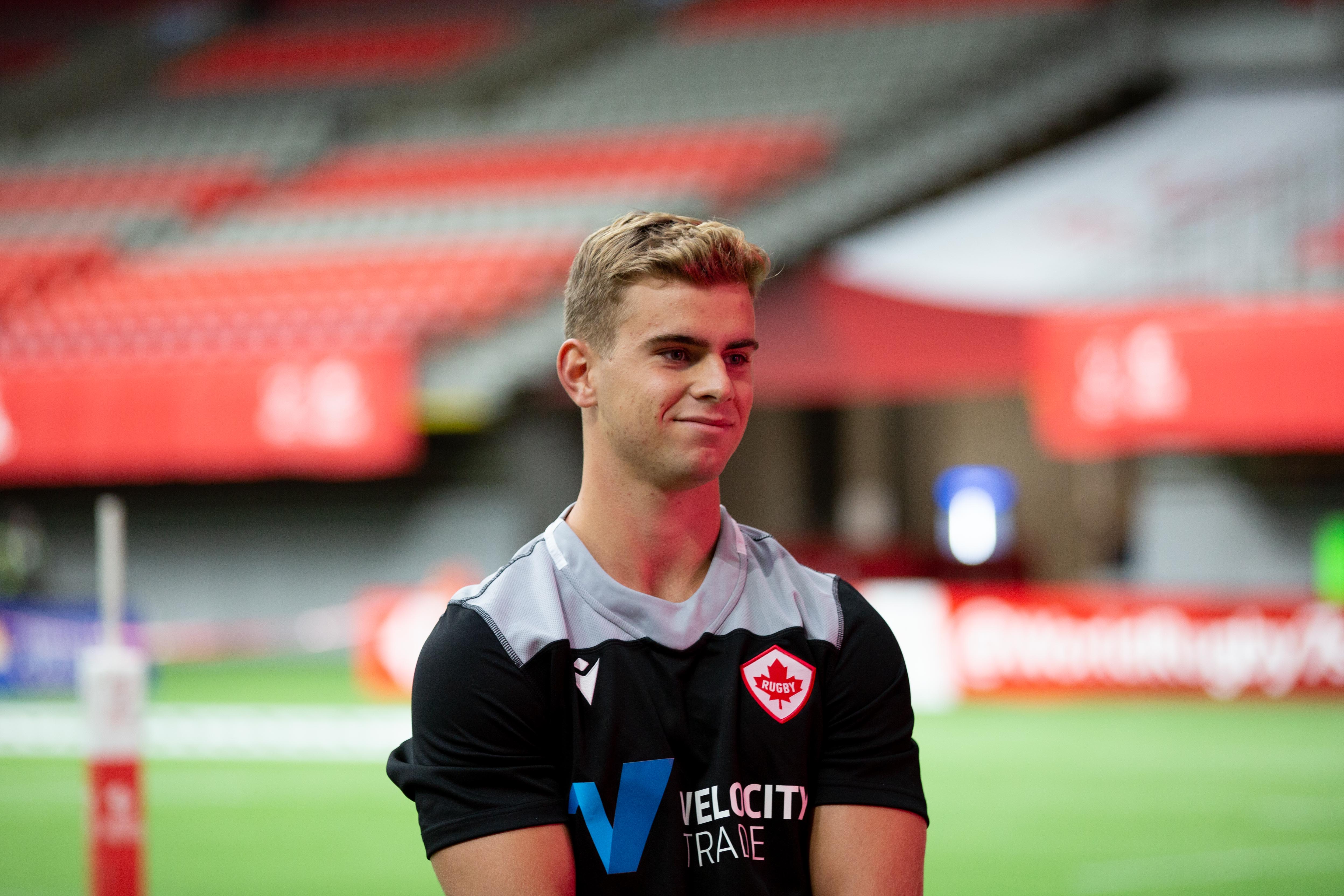 Carson showed himself as a dynamic player, making runs and smart passes in each and every match. Sophie Galloway

“We just take it as a learning experience as the whole and now we know we're capable of and put it together next week, and try to up our performance and place a better position next week,” said Carson.

A very young member of the side, Carson is a name that will soon become familiar to many Canadian rugby fans, especially if he keeps up this level of play. Look for him to take another step up next week in Edmonton.

The second year Sauder student also opened up his Team Canada account with style in Vancouver this past weekend. Percillier scored two tries, none more key than his effort against Chile, which gave Canada a 19-14 lead.

After the game against Chile on Saturday, Percillier said he was able to bring up the tempo during half time that allowed him to score two tries.

Coming to UBC during the pandemic-cancelled season, Percillier has yet to play in an official competitive fixture at the university level. Still, he’s shown exactly why he was picked to join the Canada sevens team, and should be an excellent addition to the T-Birds when he returns. 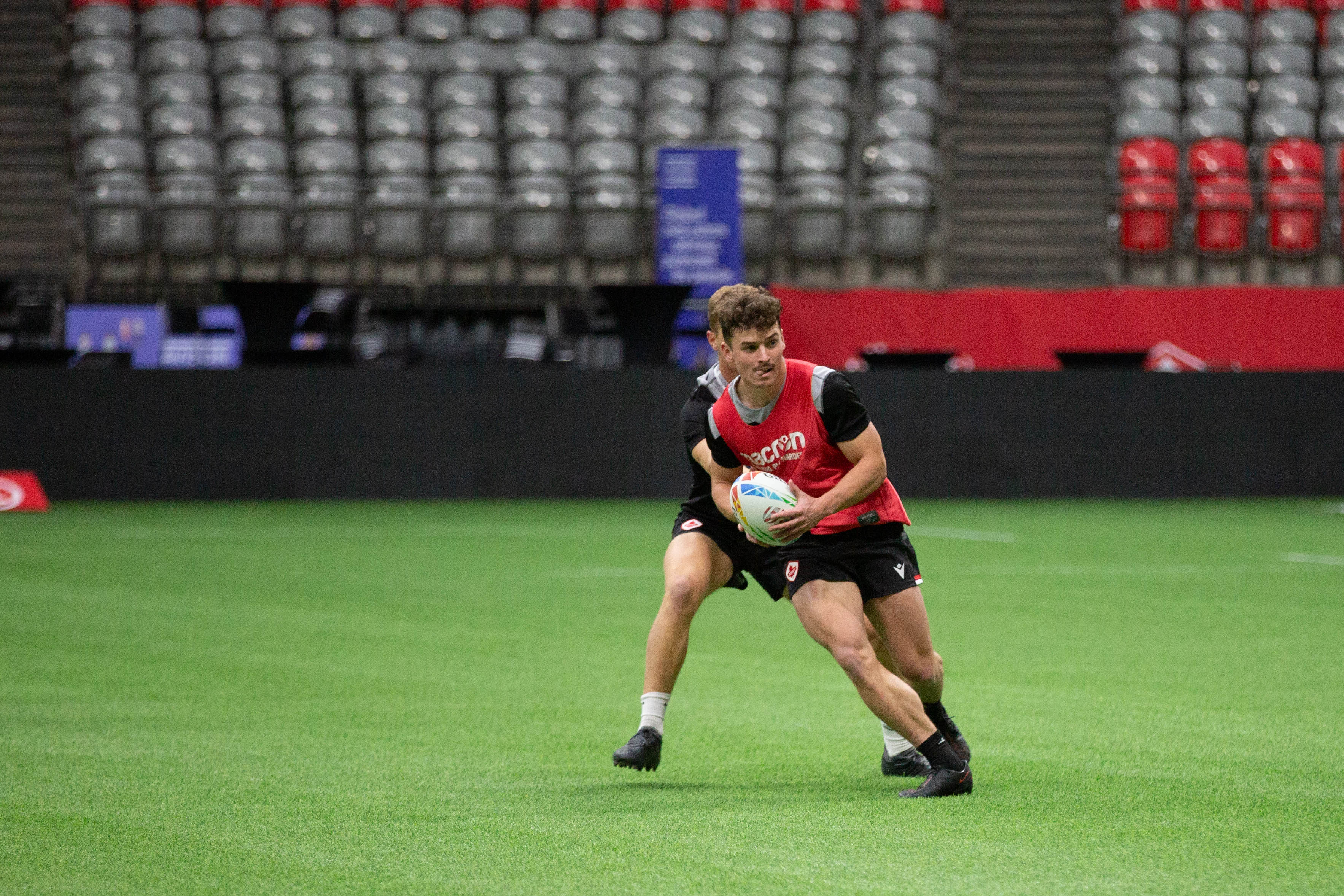 The second-year Sauder student also opened up his team Canada account with style in Vancouver this past weekend. Sophie Galloway

Last but certainly not least, Ergas made a good impression, with two tries to his name. Scoring twice against Spain, he was a key reason in their massive 33-19 victory to send them into the 5th place game. 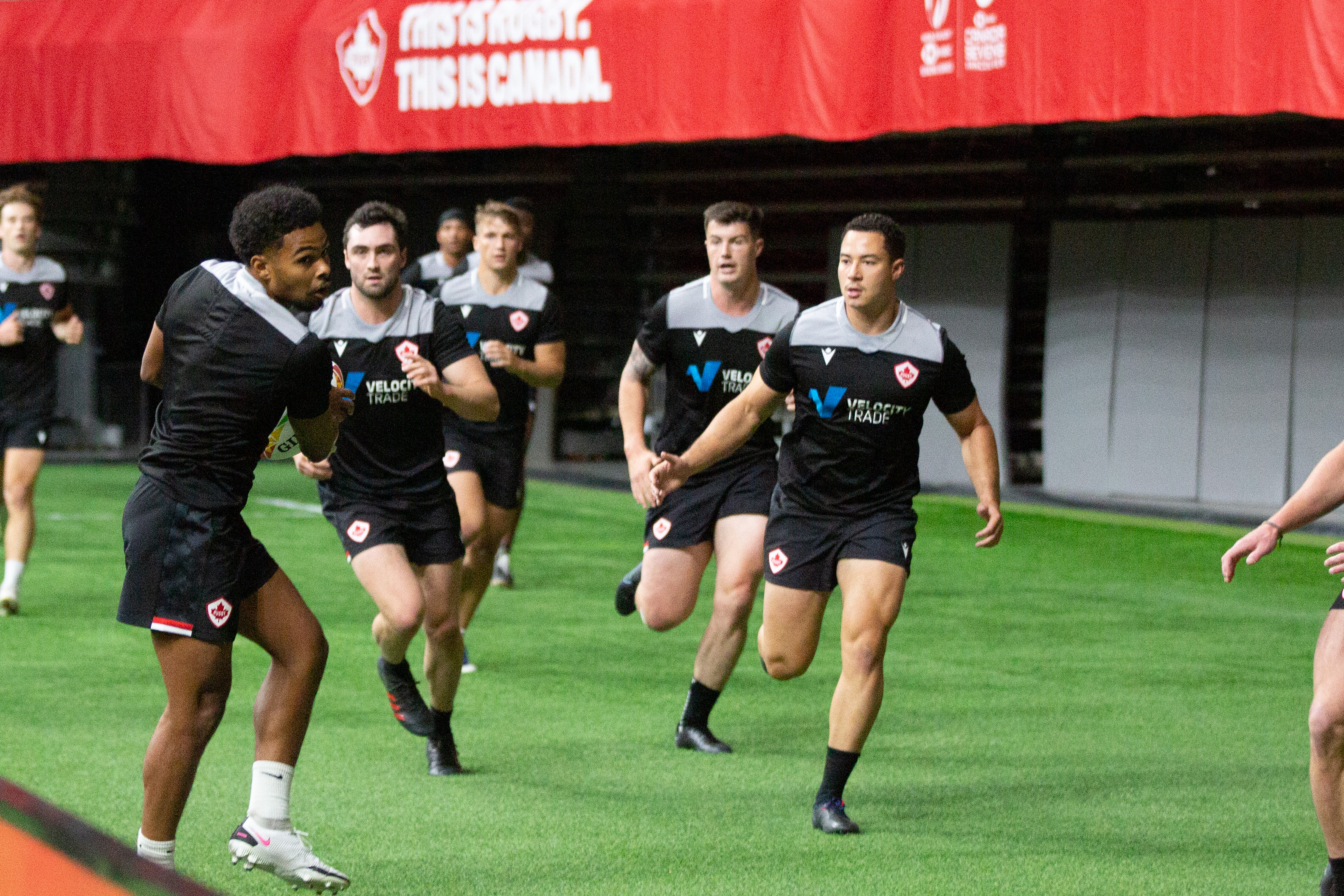 Ergas [center right] made a good impression, with two tries to his name. Sophie Galloway

His first experience was certainly an eye-opening moment for Ergas, and the roar of the crowd is certainly something he would want to hear again. The T-Bird will definitely be making more appearances in the future if he keeps up his level of play.

“We set the standard this tournament and our plan is to just keep on rising for the next month,” said Elias.

Coming off an Olympic appearance that saw Canada finish a disappointing eighth, Andrew Coe was one of the veterans that remained with the team as they returned home to Vancouver.

The UBC grad played well throughout the entire event, though his best match came against Chile on Saturday.

“It was a team performance. Anytime one of our players fell down [or] made a mistake, we had six other guys helping them back up and working hard for each other,” said Coe. 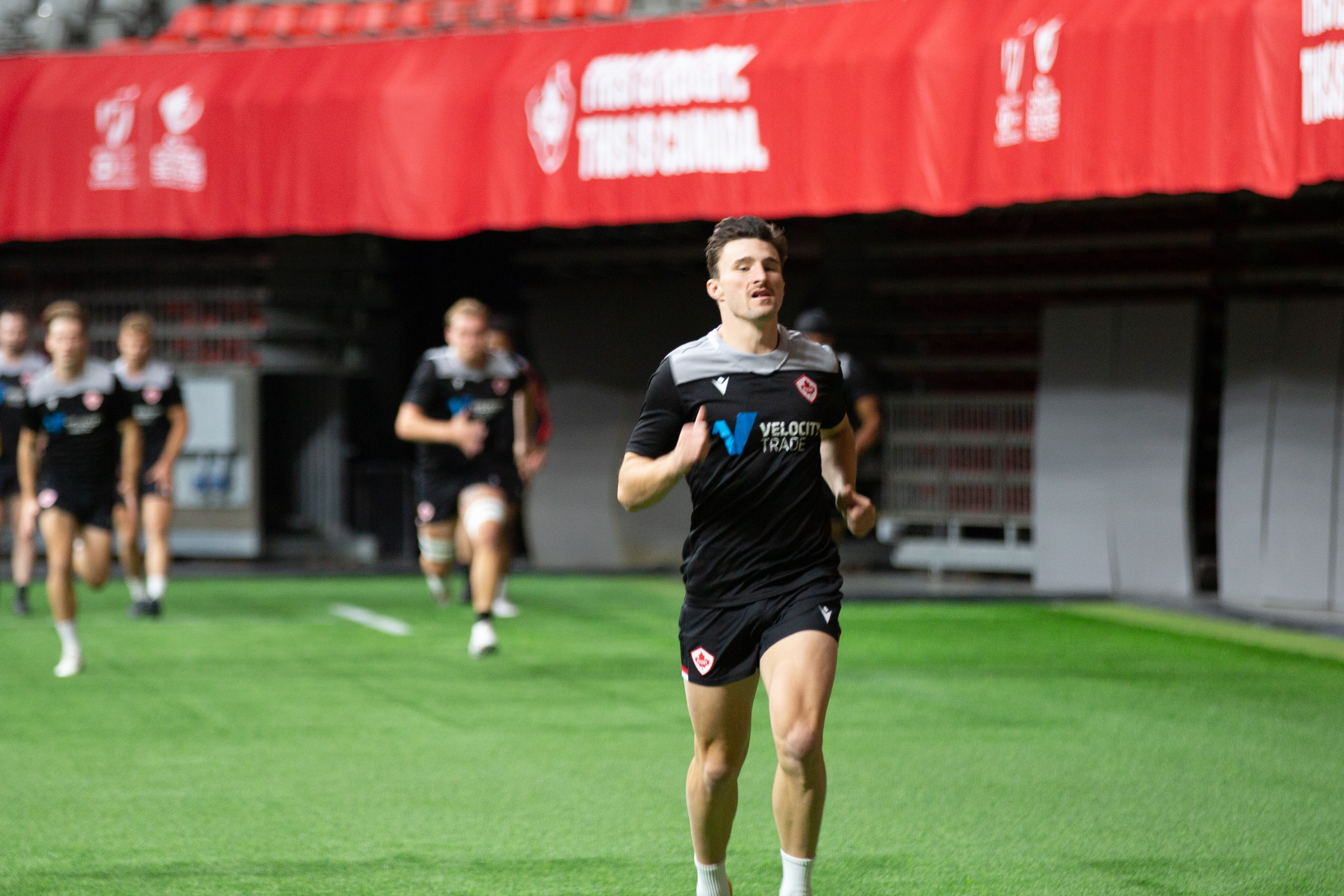 "Anytime one of our players fell down [or] made a mistake, we had six other guys helping them back up and working hard for each other." Sophie Galloway

Coe was involved in all four tries scored in the first half, one way or another. He scored Canada’s first points, but then missed a tackle to give Chile their marker. After that, his offload allowed Jake Thiel to score a try of his own, before Coe lost his footing on Chile’s next try.

"I just lost my footing and kind of went back on my heels. It's an unfortunate event, but those are the uncontrollables in sevens. When one thing happens, and all of a sudden they're under under our posts,” said Coe.

His presence was crucial in helping Canada come together, and though he only finished the tournament with one try, Coe’s impact far exceeded what was on the stat sheet. He’ll be one to watch as they head to Edmonton next week.

Team Canada finished the group stage on Saturday with a convincing 24-5 win over Germany, a narrow 19-14 triumph over Chile and a disappointing 29-19 loss against the USA.

In the Quarterfinals, Canada drew Great Britain, an extremely tough opponent. The difference shone through in the end, as Canada dropped to the fifth place semifinals with a tough 31-5 loss. However, the team managed to bounce back against Spain, taking a solid 33-19 victory as they headed into a rematch against the Americans.

Canada led into the half at 7-5, but the USA managed to break through and hand their rivals a disappointing 26-7 loss. The difference in experience showed, but Canada has much to be proud of and lots to improve on.

There certainly is potential in this team, and they’ll be looking to improve in Edmonton this weekend.

“I came out with a game plan, [and] position[ing] again, I think kills us. We had a lot of fight[s] again. I think we've taken a lot of big steps over this weekend. So we'll recover tonight, we'll review and then we'll attack the next weekend,” said Canada Men’s Sevens Head Coach Henry Paul.

“Obviously, as you know, the World Series has been kind of reined back ... but we'll try and find some tournaments for these guys to keep getting that vital practice.”

The next World Rugby Sevens Series kicks off on September 25th, as the same teams are back in action in Alberta. As for the Thunderbirds, women’s rugby has already opened their season on the road, while the men will make their home debut this Saturday. "So we'll recover tonight, we'll review and then we'll attack the next weekend." Courtesy World Rugby

“It feels unbelievable [that I] went to school with all these guys for the past five years, so to be on the bigger stage with them is unbelievable,” said Elias.