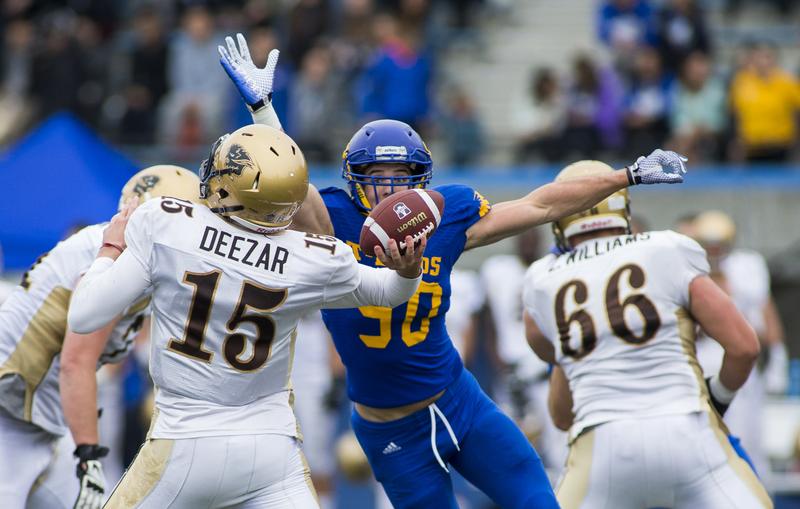 Five players from the UBC Men’s Football team have been invited to participate in the Canadian Football League (CFL) Virtual Draft Combine.

2019 All-Canadian linebackers Nick Cross and Ben Hladik will headline the T-Birds at the national combine, where draft hopefuls go through a variety of physical and mental tests to showcase their abilities in front of scouts, coaches and general managers.

The Thunderbirds are further represented by linebackers Elliot Graham and Isaiah Joseph, as well as receiver Lliam Wishart, who will participate in the regional combine.

The CFL announced the changed format earlier this year, after cancelling the 2020 season due to COVID-19.

Testing, drills and interviews will be conducted online as opposed to the usual gathering of prospects. Nine teams will be reviewing previous game footage, conducting interviews as well as examining previous medical, background and performance information to make their decisions this year.

Ranked as the 20th best CFL prospect by the CFL Scouting Bureau, Nick Cross recorded a staggering 66.5 tackles in the 2019 season putting him among the top in the country. He also recorded an interception and a sack. The Regina native will look to transition his success to the CFL stage with a strong audition in the combine.

Ben Hladik finished second on the team with 48.5 tackles, good for fourth in Canada West play. In a transition season for the Thunderbirds, the two time All-Canadian racked up two sacks and an interception. Hladik, the 2018 Canada West Defensive Player of the Year, looks to add his name to the list of UBC Football alumni playing in the CFL.

With five players participating, only the Calgary Dinos have more players among Canada West schools featuring in the combine with eight.

The 2021 CFL Draft date is to be announced in the coming weeks, with UBC looking to produce more CFL talent.

Previously in the 2020 draft, four T-Birds were picked for a total of 19 UBC draftees in the past five years.