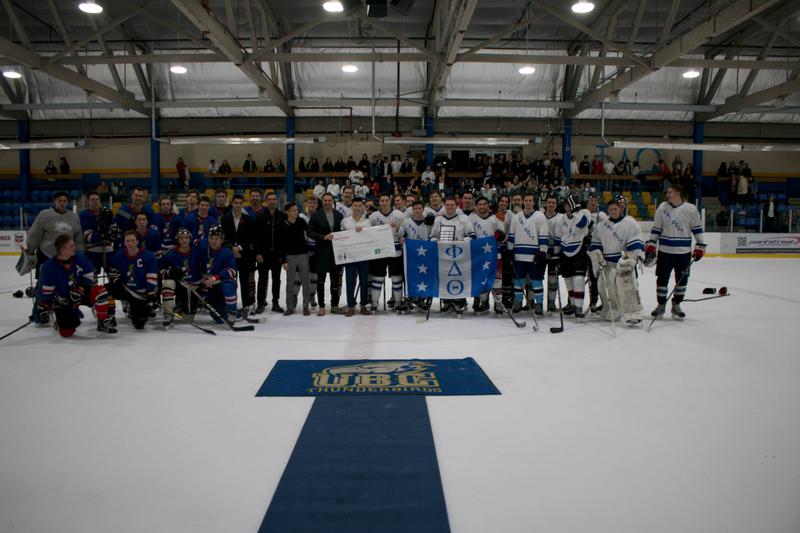 Last Friday at Father Bauer Arena, two fraternities, Beta Theta Pi and Phi Delta Theta, came together to host the second annual Drop the Puck for Mental Health charity game. The premise for the event saw the two hosting fraternities play each other in a friendly game of hockey with proceeds going to the Canadian Mental Health Association (CMHA). The score ended in a 6–2 in favour of Phi Delta Theta.

Sebastian Kondratowski from Beta Theta Pi was one of the organizers for the event that raised over $31,000, three times the amount that the same event raised in its inaugural year. Kondratowski added that this determination to make a positive change in the community is why “they had begun planning this at the beginning of last summer, when [they] could’ve been hanging out the at the beach”

The relationship between Greek Life and philanthropy is unique, and often results in unconventional events with Friday night being one of them. With a surprise appearance from the UBC dance team in the first intermission, and more chirping then Phil Kessel would have gotten in Toronto, the event was an entertaining from beginning to end.

While this year’s event over, both Beta player Ben Hone and Kondratowski are already looking to the future with the ambition to grow the event for next year in an effort to continue to make a positive difference. Kondratowski stated his desire that this would continue on as an annual event.

As for the actual game itself, Phi Delta Theta forward Michael Tersigniscored 4 of his teams 6 goals. Nothing says a successful night like a hat trick and some change leftover.

But the real stars of the game had to be the UBC Dance Team who made a surprise guest performance after the first period. With Cardi B blasting and fists pumping, they radiated the same high-octane exuberance that was present throughout the entire night.