UBC beats Winnipeg in front of packed crowd at Courtside 2020 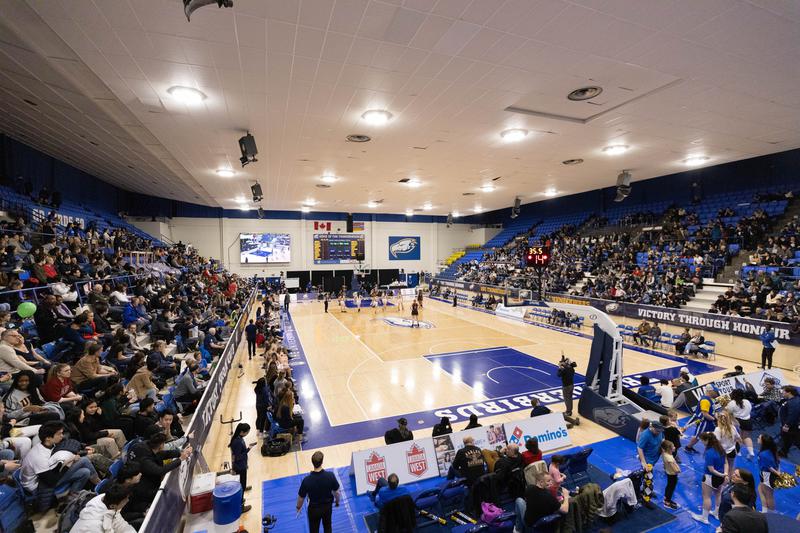 By the time of the men's game, a crowd of 1,679 had poured into War Memorial Gym. Salomon Micko Benrimoh

Stakes were high for both the UBC men’s and women’s basketball teams this past Friday night. Both squads went against the Winnipeg Wesmen in an attempt to head into the Canada West playoffs on a high note and would emerge victorious in what turned out to be a memorable evening for UBC Basketball. 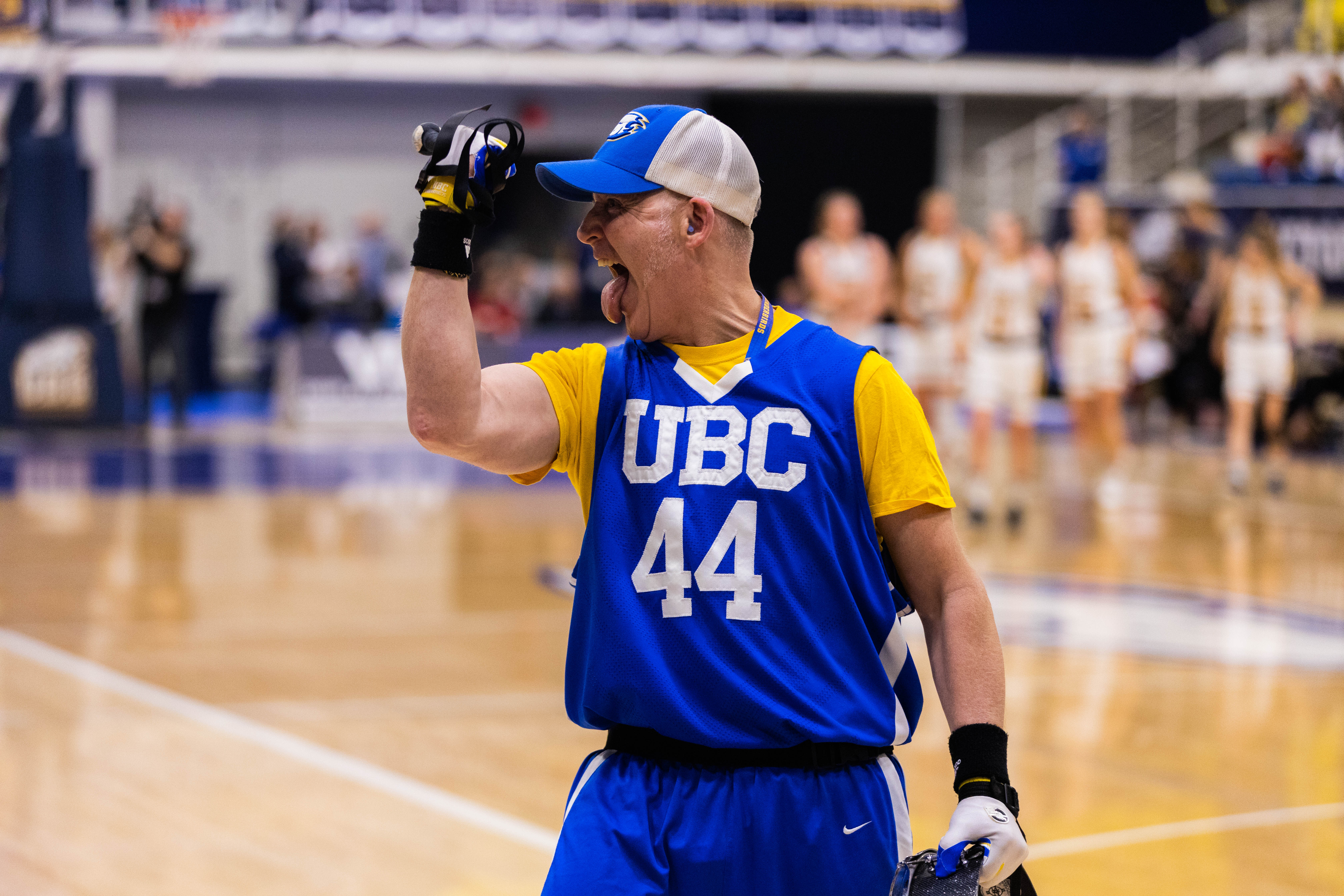 Courtside started off with the women’s game. Two minutes into the first quarter, the T-Birds’ momentum forced the Wesmen to take an early time out. Afterwards, the Wesmen answered with five fast points, which included a three-pointer and a layup from a turnover. But it was not enough for the Wesmen as the quarter would end with UBC up 25–18.

Although the Wesmen had the first possession in the second, great defensive play by UBC kept Winnipeg scoreless until halfway through the quarter. Meanwhile, T-Birds’ guard Gabrielle Laguerta would hit a few threes, including a buzzer-beater that kept UBC up by 10 going into halftime.

The game would get physical in the third, resulting in more than a few fouls for both sides. The T-Birds continued their stellar passing and forced turnovers that led to easy layups as they extended their lead by 14 while forcing the Wesmen to take another timeout.

UBC forward Keylyn Filewich had a great second half, especially in the last quarter as she stole several offensive rebounds and drew numerous fouls. 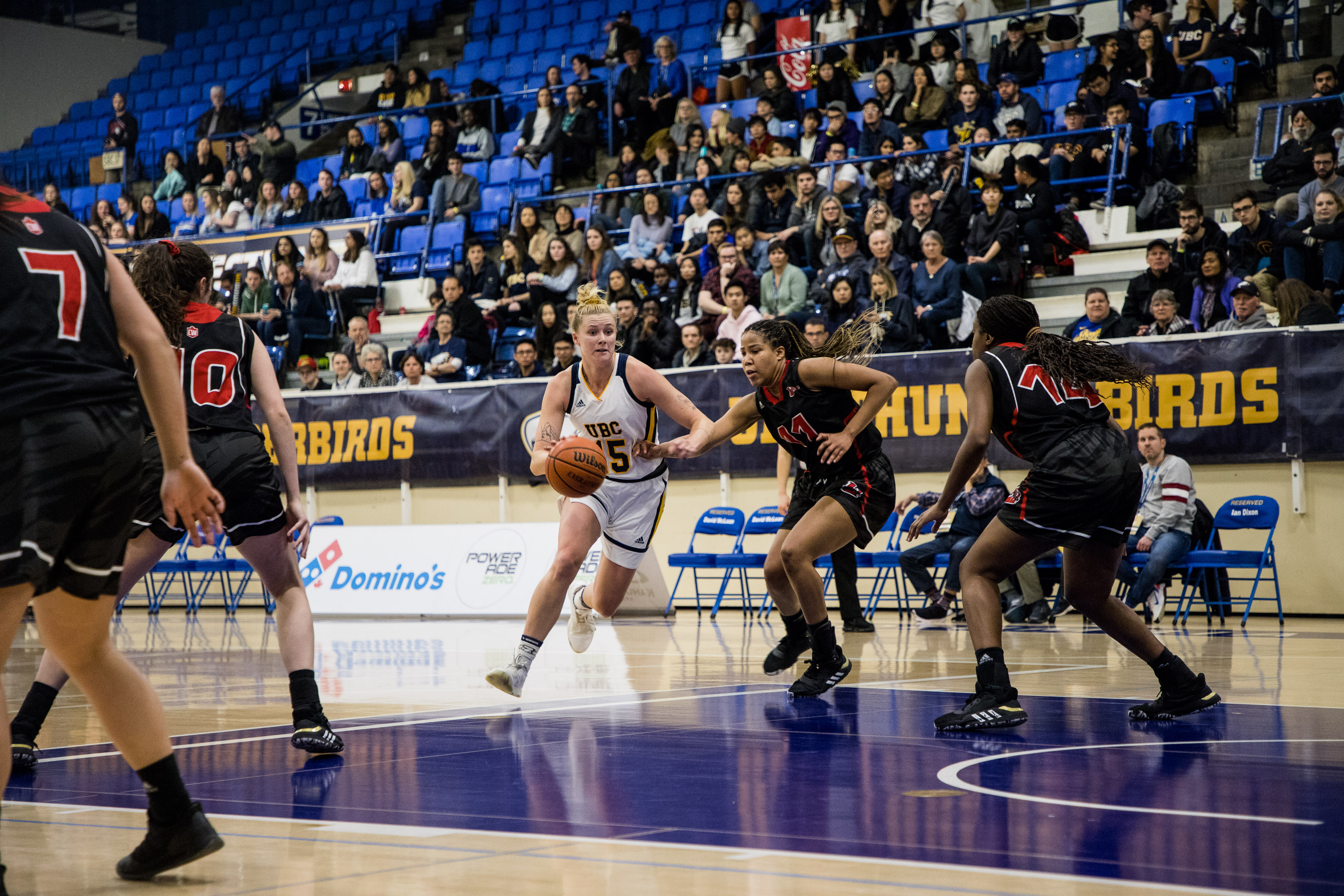 The women’s team was too much to handle for the Wesmen. Aman Sridhar

As the game drew to a close, the fans cheered loudly for the T-Birds as they would finish with a dominant 81–62 victory.

With seven consecutive wins heading into the Canada West playoffs, head coach Deb Huband still believes that the team can get better.

“I still think we have upside, getting Maddison Penn back in the lineup. I think we still have room for improvement, but we are definitely trending in the right direction,” Huband said after the game. 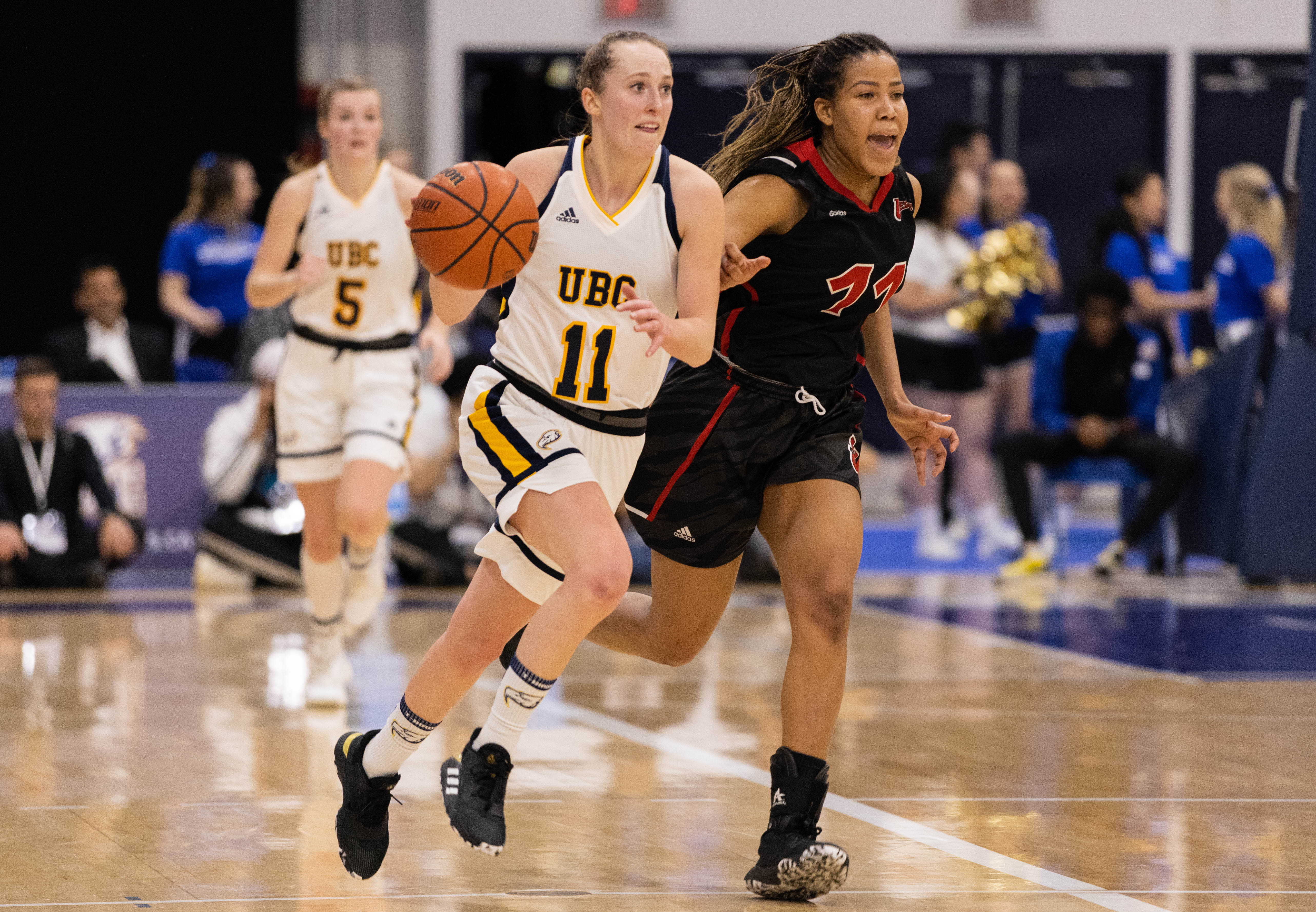 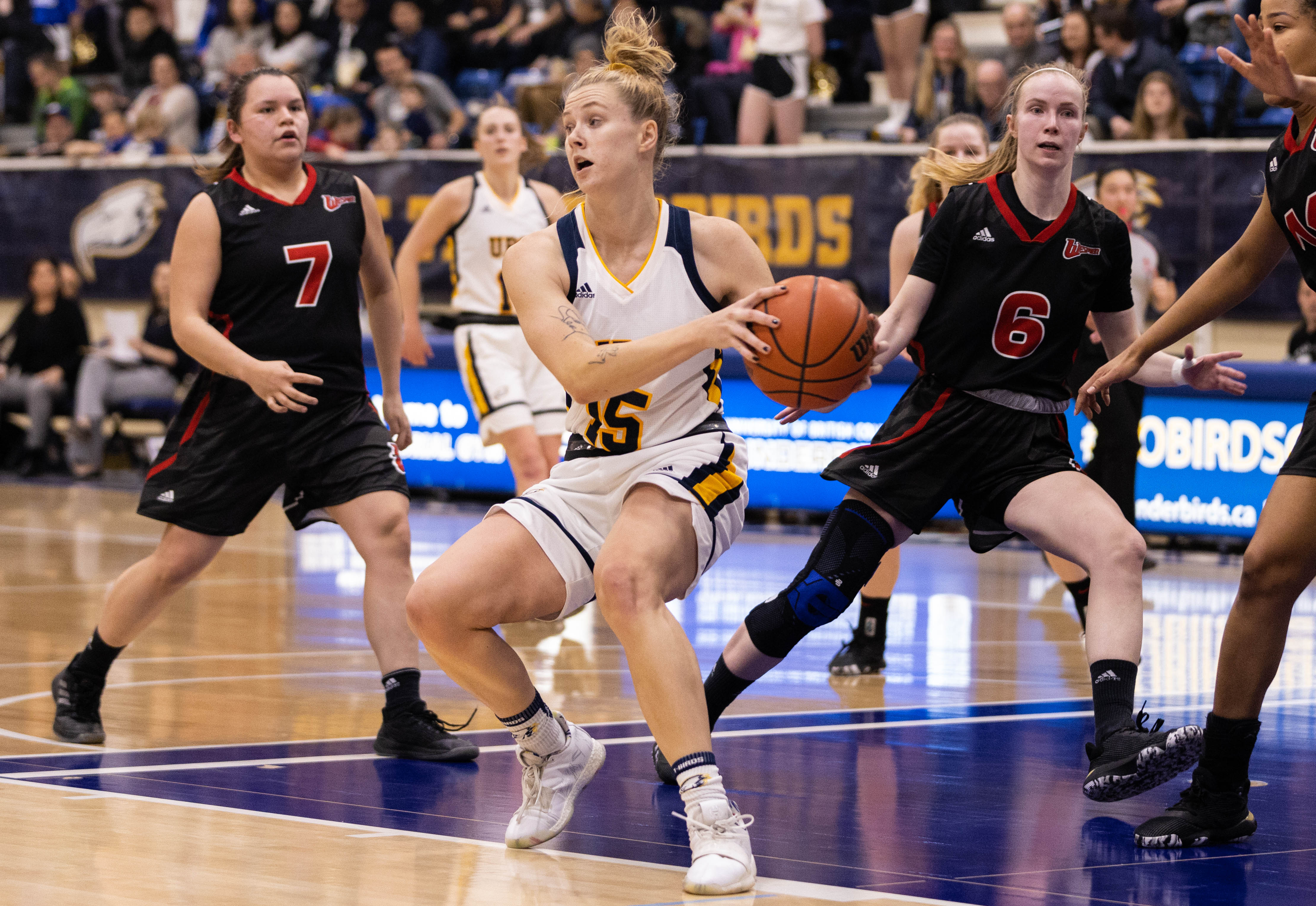 As for the men’s game, the atmosphere in the building was electric even before tipoff. Fans were eagerly anticipating the home team hitting nine three-pointers so that they could receive the aforementioned free Domino’s pizza. Oh, and also a win for UBC, of course. 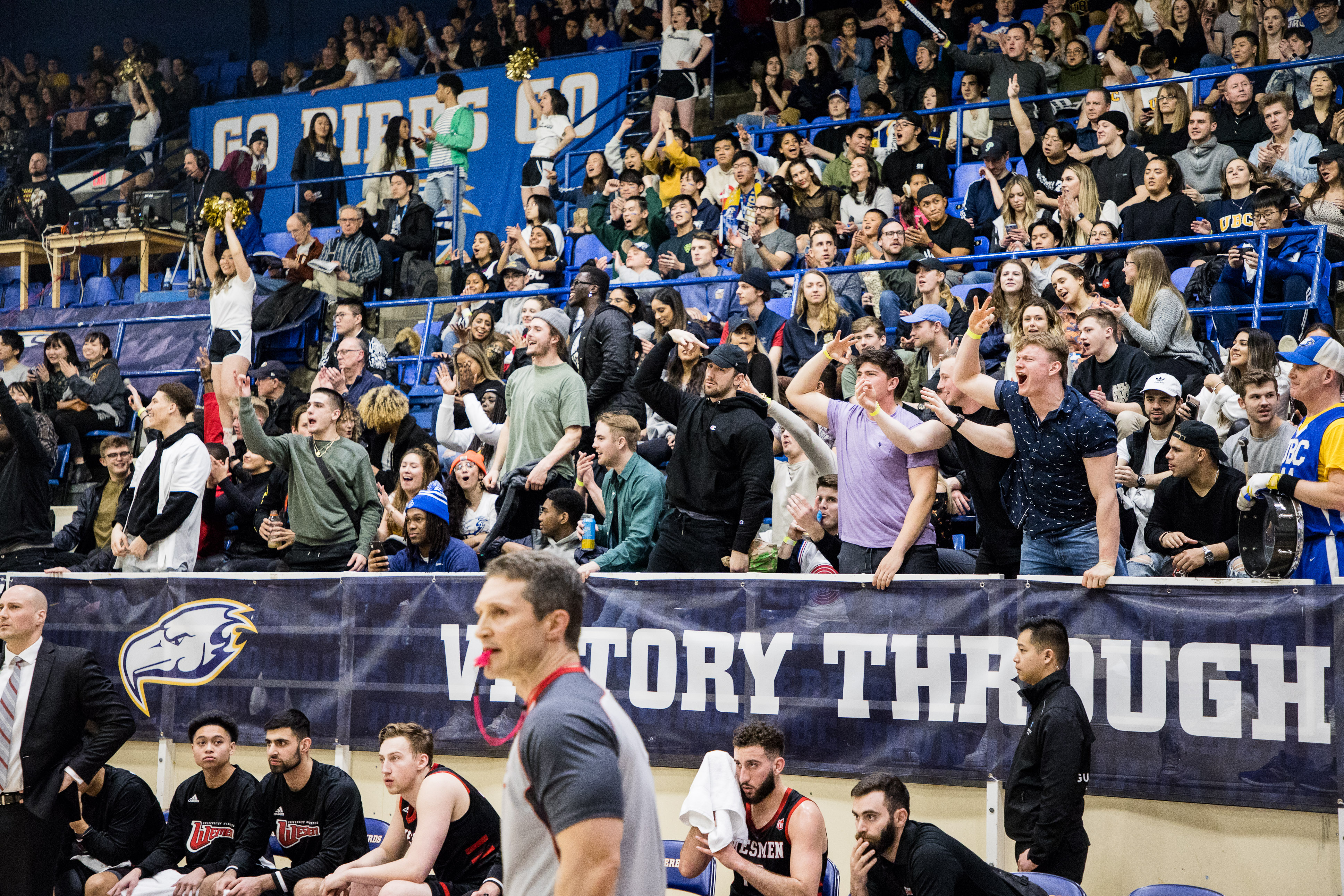 Fans yelled out after the T-Birds make a three-pointer. Aman Sridhar

The Thunderbirds used the crowd’s energy to their advantage, as forward Grant Audu would score an easy layup right after tipoff, almost blowing the roof off of War Memorial Gym.

On the other side, the Wesmen started the game a little timid, chucking up a few airballs in the opening minutes while receiving taunts from fans. In the latter stages of the quarter, veteran UBC guard Jadon Cohee caught fire, hitting a couple of three-pointers and finishing with almost as many points as the entire Winnipeg team. 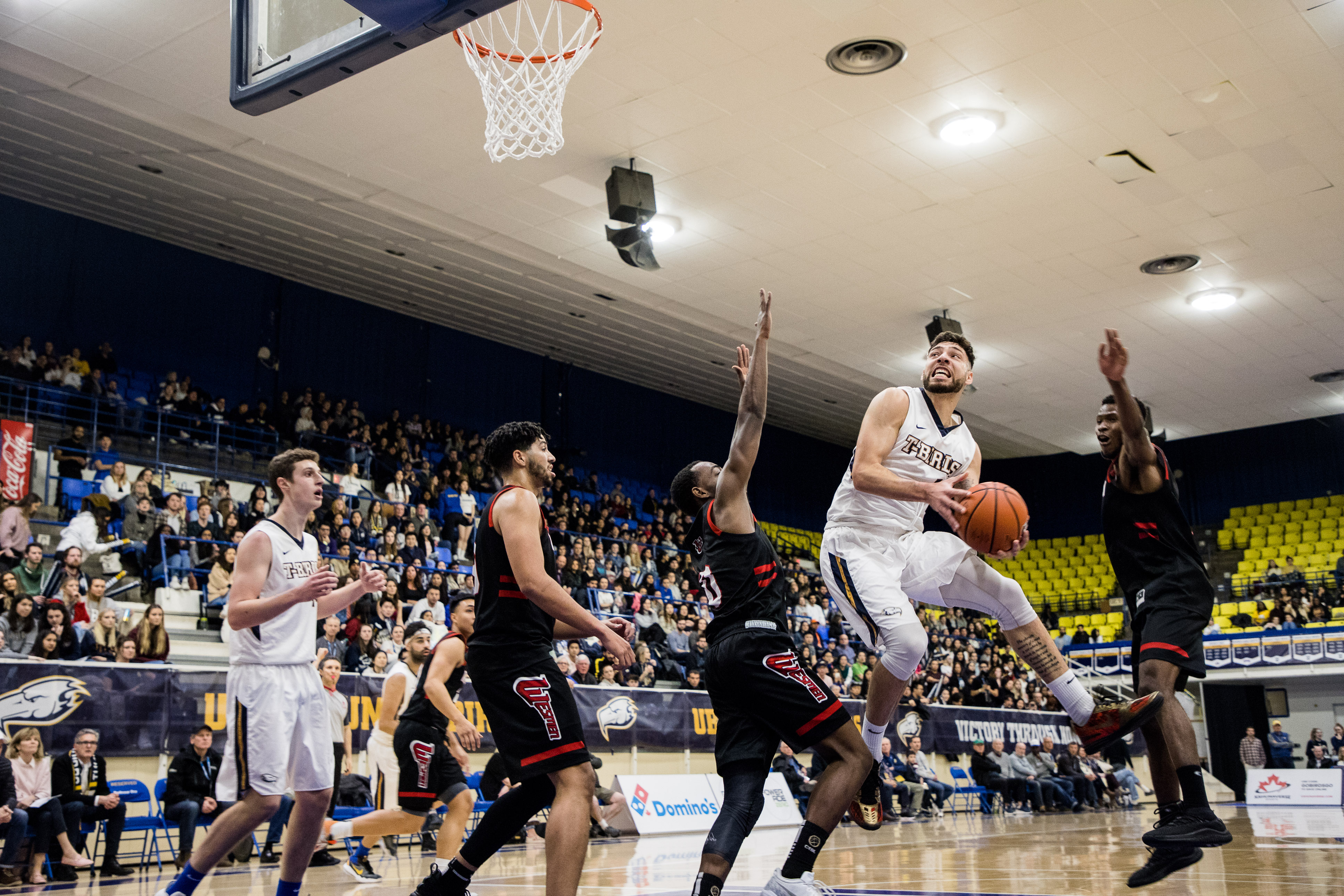 The first quarter ended with the Thunderbirds up 28–16, as the crowd began eagerly counting down the number of threes remaining before the smell of Domino’s would fill the stadium.

The rest of the game became a much tighter contest, as both the fans and Thunderbirds failed to maintain the energy from the opening quarter. The pace would pick up in the second half, with the two squads taking turns scoring on numerous fast breaks. UBC maintained a commanding 48–35 lead going into halftime, but they only managed to outscore the Wesmen by a single point in the quarter. 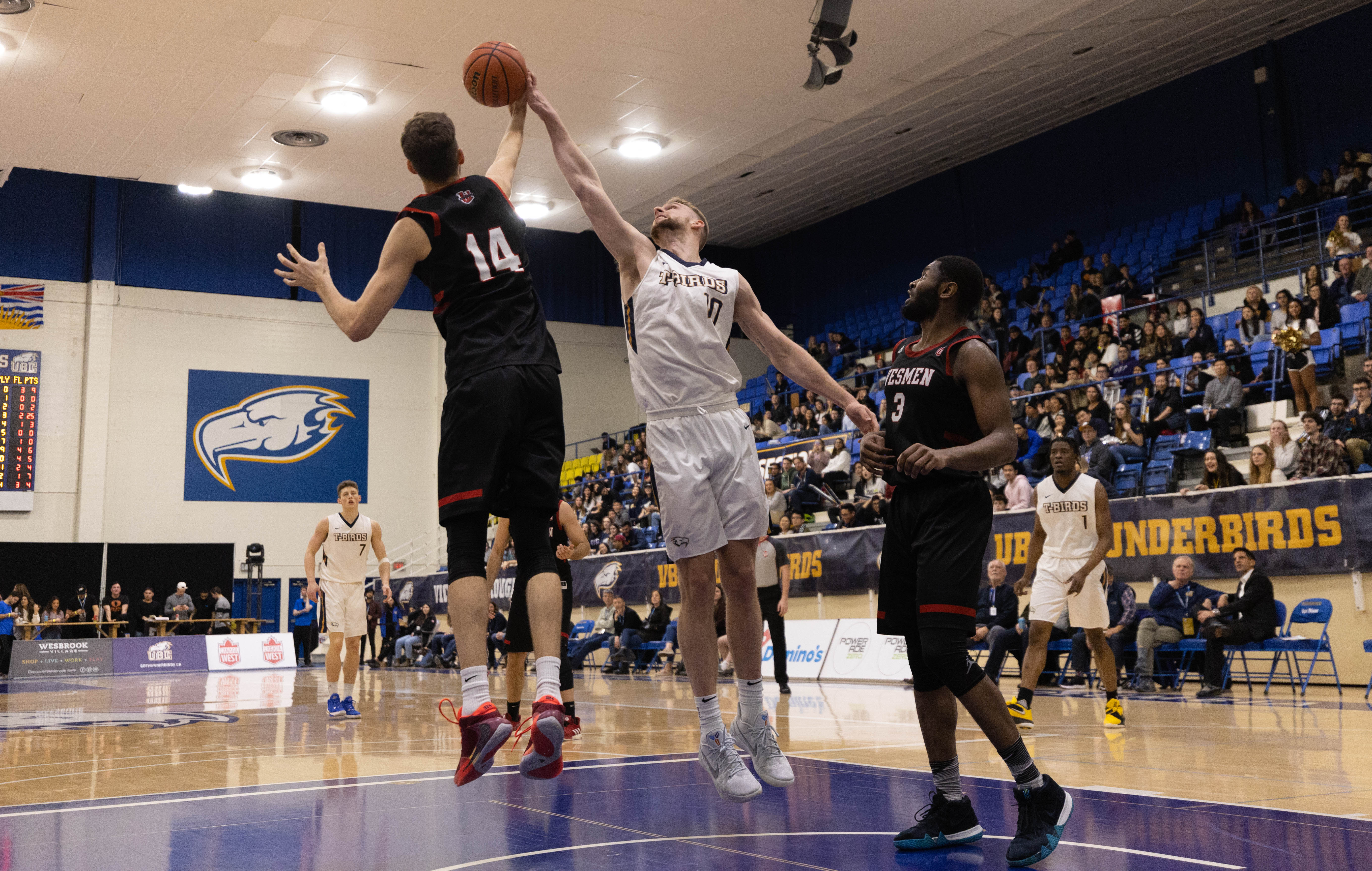 Attempting to mount a comeback, Winnipeg kicked off the second half with a quick three. But Thunderbirds guard Manroop Clair shifted the momentum back to UBC by answering with a few of his own, including the ninth one for the home team.

The crowd exploded and rushed to get pizza as the two squads regrouped during a stoppage in play. With fans now satisfied, the excitement in the arena died down a bit, but Thunderbirds forward Grant Shephard would rejuvenate the crowd with an alley-oop dunk in the waning seconds of the third. 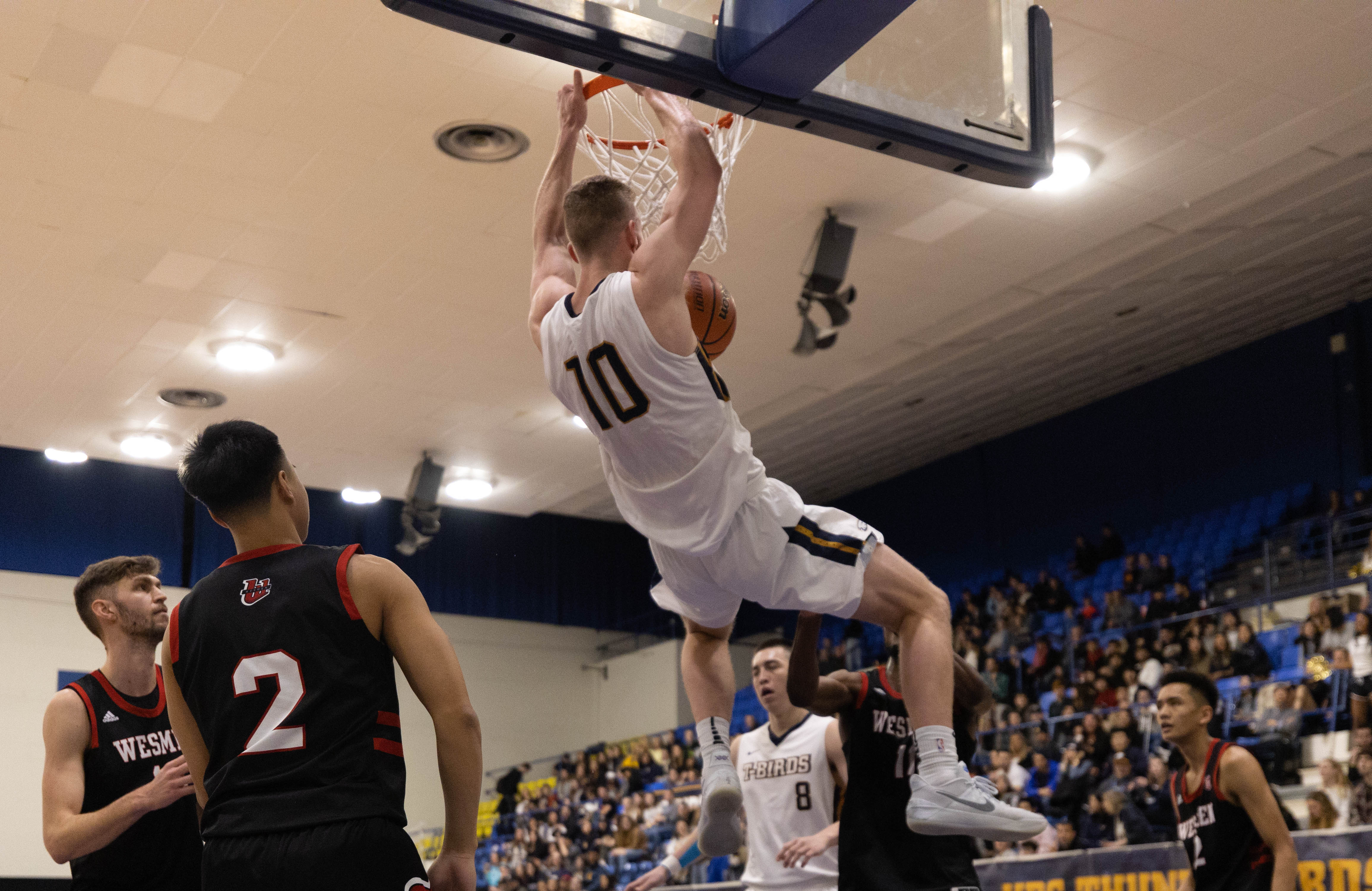 Refusing to give up, the Wesmen scored four quick points to start the final quarter, cutting the lead down to 11. Luckily for UBC, Shephard continued his strong play as he dominated in the paint and scored back-to-back layups as the Thunderbirds cruised to a 97–85 victory over Winnipeg. 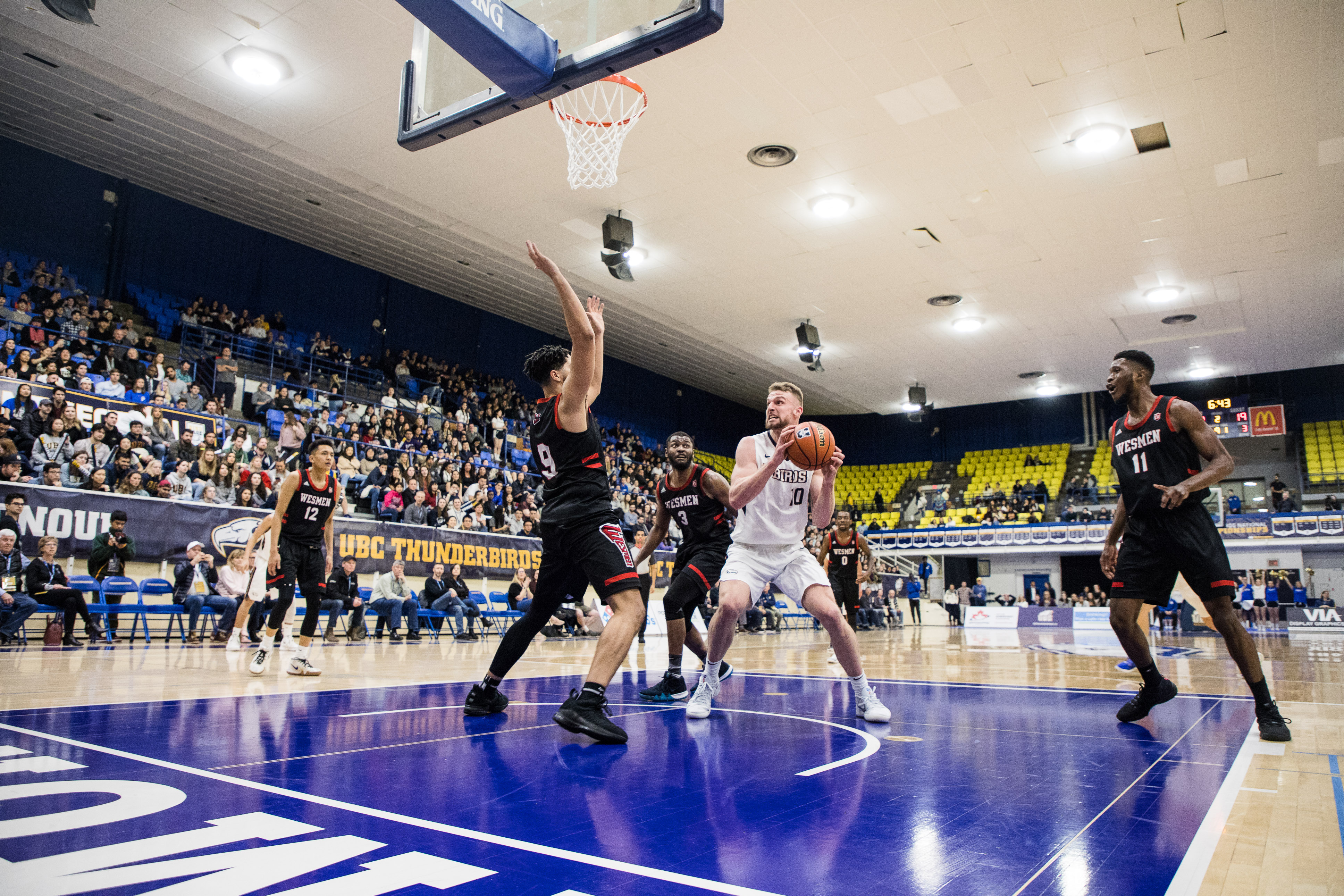 Shepard deep in the paint in the first-half. Aman Sridhar

“There wasn’t a lot of flow to the game [due to] a lot of stoppages. Both teams were in foul trouble and missed a lot of free throws,” said Thunderbirds men’s basketball coach Kevin Hanson when asked why UBC couldn’t maintain their momentum after the first quarter. 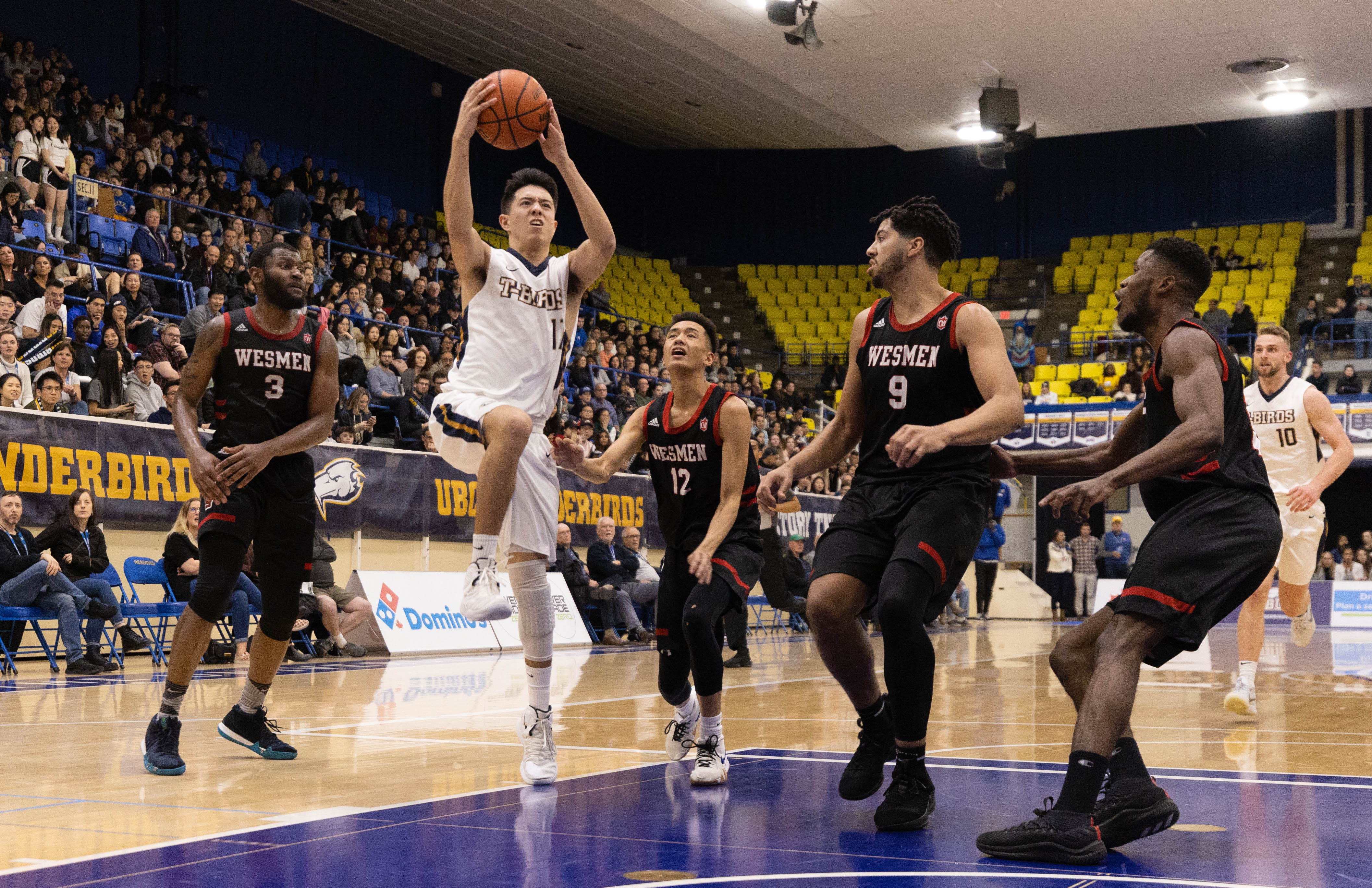