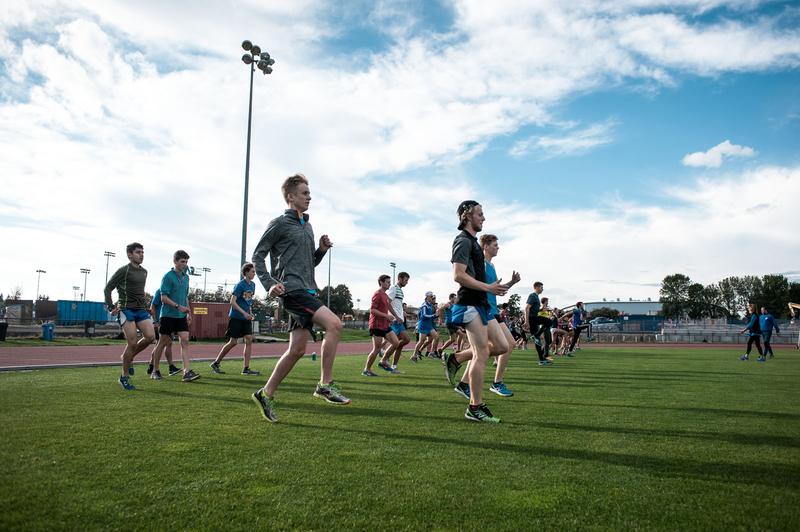 The cross country team warms up during the preseason

The football team might be making all the headlines this week, but they aren’t the only UBC team competing at the national level. The Thunderbirds’ cross country team competed at the NAIA national championships November 21 in Charlotte, North Carolina.

The women’s team, three time defending champions, finished second this year. The men earned their best ever finish in sixth, one point ahead of Lewis-Clark State College — a perennial rival.

The team fought early injuries and a slow start to the season. Under new head coach Laurier Primeau and his assistant coaches Chris Johnson and Norm Tinkham, the team has had a change in training techniques. Marek Jedrzejek had previously coached the team for 25 years before retiring after last season and handing responsibilities off to Primeau.

“We had a whole renovation, if you will, of the coaching structure [with] a new head coach and a bunch of new assistant coaches. The big change for us was the replacement of Marek Jedrzejek,” explained John Gay, a second-year Arts student.

On the women’s side, Natalia Hawthorn finished first for the ’Birds and ninth in the race. She was followed by two athletes in their last year, Devan Wiebe and Kirsten Lee. Wiebe finished 18th and Lee finished 24th. Nicola Symonds, Madelyn Brunt, Nicole Lacis and Sandra Kilmartin also competed at the event.

Jesse Hooton finished 10th at the race and was the first T-Bird across the line. He was followed by second year Jeff Groh, who debuted at nationals this year and finished 40th. Bilal Shamsi, John Gay, Devin Rajala, Max Trummer and Lukas Jarron also competed at the race.

“Another big performance came from a senior on our team, Bilal Shamsi … it was his last cross country race as a T-Bird and he came in really clutch for us. Kicking down a runner from Lewis-Clark … he was able to take him down just at the finish line which ended up being huge. We ended up beating Lewis-Clark by one point,” said Gay.

The ’Birds return to running as the track and field season starts January 17 in Seattle, Washington at the University of Washington Indoor Preview.