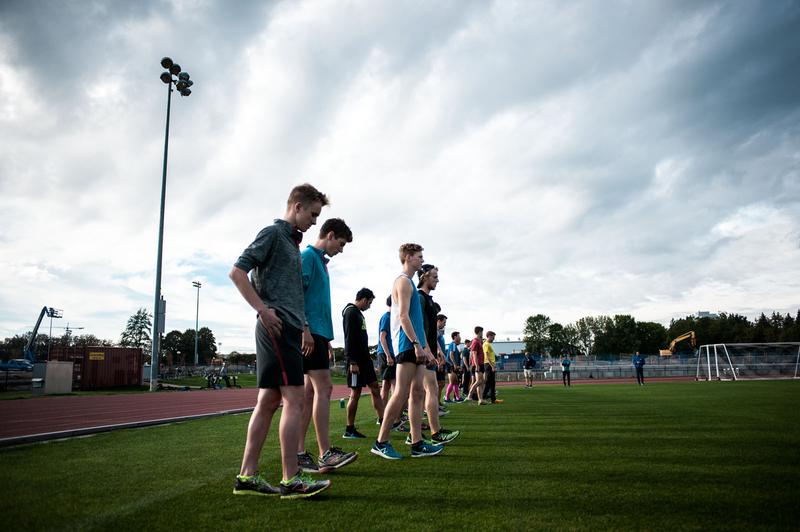 The team warms up during the reason, when they were plagued with injuries. photo Kosta Prodanovic / The Ubyssey

You probably haven’t heard about it in the midsts of the football team heading to the Uteck Bowl, women’s field hockey winning nationals and both soccer teams finishing in the top three, but the UBC Cross Country team is headed to the NAIA Championships this weekend in Charlotte, North Carolina.

On November 7, the team competed in the Association of Independent Institutions (AII) Conference Championships in Denver, Colorado and both the men’s and women’s teams placed first. More impressively, both teams earned perfect scores, taking first through fifth place.

“A highlight for us was that both the men and women had perfect scores at our conference meet,” said head coach Laurier Primeau. “I think that gives us a great deal of confidence going into nationals."

This is Primeau’s first year at the helm of the cross country team after taking over for long time coach Marek Jedrzejek who Primeau credits with the recruitment of this year's athletes.

“There is an initiation period for everyone and there certainly is for me, trying to get to understand the culture of the team and the direction we need to go. But I am very happy with our coaching hires and the formation of our staff,” said Primeau. “I think we are doing some really good things with some really good athletes."

The season got off to a slow start as the team battled injuries. But Primeau is confident that all of his athletes are in shape for the finals.

“We certainly started the season with some people who were a bit banged up,” said Primeau. He believes this was the reason behind the women dropping in the rankings. “Everyone is healthy now and this is the most important time of the year to be healthy."

Primeau is looking forward to the meet, but is unsure how his inexperience will effect the competition.

“It’s my first go around and I don’t have a strong understanding of the NAIA, it’s level of competition, who’s holding back and who is really demonstrated their full abilities,” said Primeau. “Despite the fact that the women’s team, especially, is the three time defending NAIA champions, we also lost four of their scoring athletes from the team last year."

“We are going to need some athletes to step up and run above themselves. But I think we are better than what our NAIA ranking indicates right now."

The men are currently ranked sixth in the NAIA and the women are ranked seventh.

Beyond competing, Primeau is building the community of the team.

“We’re really trying to build culture and this philosophy of giving back,” Primeau explains. “When we went to our conference championships in Denver ... we ran we went to the dollar store and bought toothpaste, toothbrushes, combs, snacks, shaving cream, razors and put together care packages and then went to downtown Denver and distributed them to homeless people."

“[We are] trying to use running as a vehicle to be better citizens."