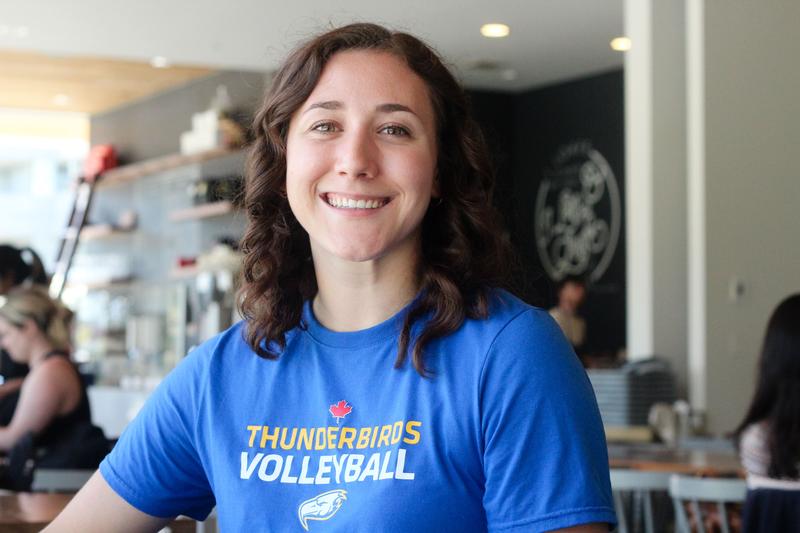 It was the women’s volleyball national finals and poised across the court were the UBC Thunderbirds’ strongest regional rivals, the University of Alberta Pandas — the ’Birds were winning.

As Danielle Brisebois, a fifth-year outside-hitter for the team, served at game-point, a hush fell over the spectator-filled bleachers. The Pandas’ reception went too long and UBC left-side hitter Laura MacTaggart ended the game with a two-handed smackdown.

All around Brisebois, the team erupted in celebration. She was on her knees, yelling and covering her face in joy. The rest of the team surged onto the court cheering and piling themselves around her.

Ten years ago, Brisebois did not have volleyball on her radar. In 2007, her mom’s best friend noticed that Brisebois and her sister Taylor were tall for their age and recommended that they try out the sport.

“I just walked [onto] this team … we were both so tall and they needed players [so] they didn’t really care what our skill level was like at that point,” Brisebois said in a phone interview.

The Brisebois sisters played with the ACTS elites, a club team based out of Orangeville, Ontario before moving to a better-known team called Aurora Storm. Taylor was a year older so Brisebois always played a level higher than her age, with bigger and stronger girls. These years of volleyball helped them both develop into better players.

While playing for Aurora Storm at the club level, Brisebois attended a private sport school in Vaughan, Ontario called The Hills Academy. The school was trying to get a volleyball program started at the time, so they brought on Dustin Reid — the current Ryerson University head coach — to build it.

In grade 10, when Brisebois was talking with Reid, the topic of university volleyball came up. At that point, she didn’t even know that playing volleyball in university was a thing you could do. When she asked what school was the best, he said UBC.

So, at the end of grade 11, as her club team went to nationals in Abbotsford, BC, she emailed UBC’s head coach Doug Reimer asking him to come watch her play.

“I was super nervous and didn’t really know what to say, or what I could say, because I wasn’t sure what he was feeling … I think they watched a little bit of me play and stuff but I suppose it was enough that they kept their interest,” said Brisebois.

The Bolton, Ontario native came to UBC and started her university career in the 2012/13 season. That year, the team won its sixth straight national championship. As expected, Brisebois didn’t play much, scoring only a few kills that year.

The next year, the team lost in the national final. And the season after that, 2014/15, the team finished in sixth place at the CIS championship. Even with that disappointing result, Brisebois exploded onto the scene that year for the ’Birds, averaging 3.53 kills per set and finishing with a season high of 21 kills. In her phenomenal first national championship as a starting player, she held the highest number of kills for the T-Birds.

She was on track to continue this trend in the 2015/16 season. However, in January 2016, Brisebois sat out two games due to injury. UBC dropped both games to the Brandon University Bobcats that weekend. According to Brisebois, the L5-S1 joint in her spine is fused abnormally. It causes some back pain and it’s hard to manage. At that point in the season, the pain had reached a new level.

“It was just … it was new and it had gotten the worst it’s been and I didn’t know how to manage it at that point. I had kind of a lateral shift, so my torso would shift over the top of my hips,” she laughed nervously as she recounted the experience. “It was hard to move and not nice to sit or anything, but, honestly, time was the best thing for it.”

Since then, the pain hasn’t been as bad as it was that weekend, but she has had to do different workouts from the rest of the team. That year, the Thunderbirds finished in fourth place at nationals.

The national championship win in this past 2016/17 season was thus a return to former grace and an improvement on the team’s performance the year before.

“The way we came together [in the second term] ... it was just a different feel on the court compared to first term,” said Brisebois. “It just felt so calm and everyone believed in each other and even practices, they were always so fun and everyone wanted to be there and worked hard consistently.”

Brisebois was named an all-star and the championship’s Most Valuable Player (MVP). Later, she was presented the Marilyn Pomfret award for being the most outstanding female athlete of the year at UBC.

During her career, Brisebois has also fulfilled her dream of playing for the Canadian national team. She played on the junior team, made the B-team and trained with the senior team. Last summer, she represented Canada internationally.

She was once again named to the national team this year and will be playing with them throughout the summer. After that, she plans on going to Europe in the fall to play professionally. Still, there’s a lot of different leagues in Europe and Brisebois isn’t entirely sure about the future.

“I don’t know where I am going to next,” she said laughing.“There’s so many options.”