ISU Grand Prix Final Day 1: With triumphs and tribulations, it's too close to call after Thursday’s events 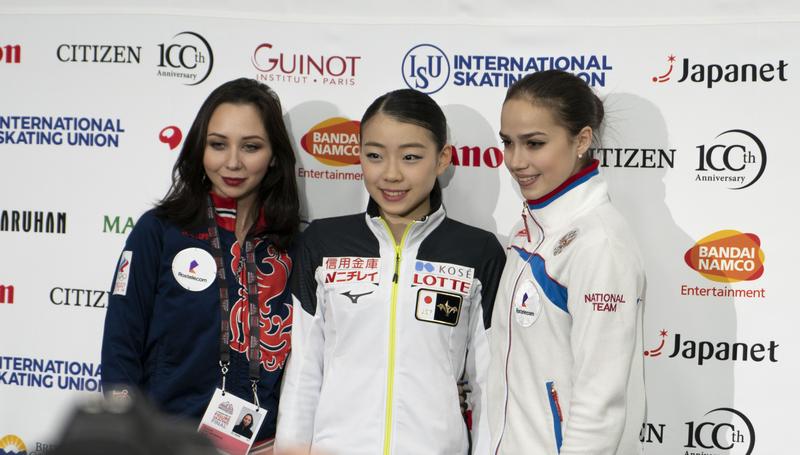 Canada’s only senior representative at the Grand Prix Final this year, Keegan Messing, put on a good show today in the short program. But he was still having some issues with his jumps — something that has been inconsistent this season.

“I definitely fought for every little element out there,” Messing said after his short program. “Every take off just felt a little off so really, I just had to tuck and pray a little bit. But I stayed on my feet and I can be happy with that.”

With a score of 79.56, he’ll be going into the free program tomorrow in last place. 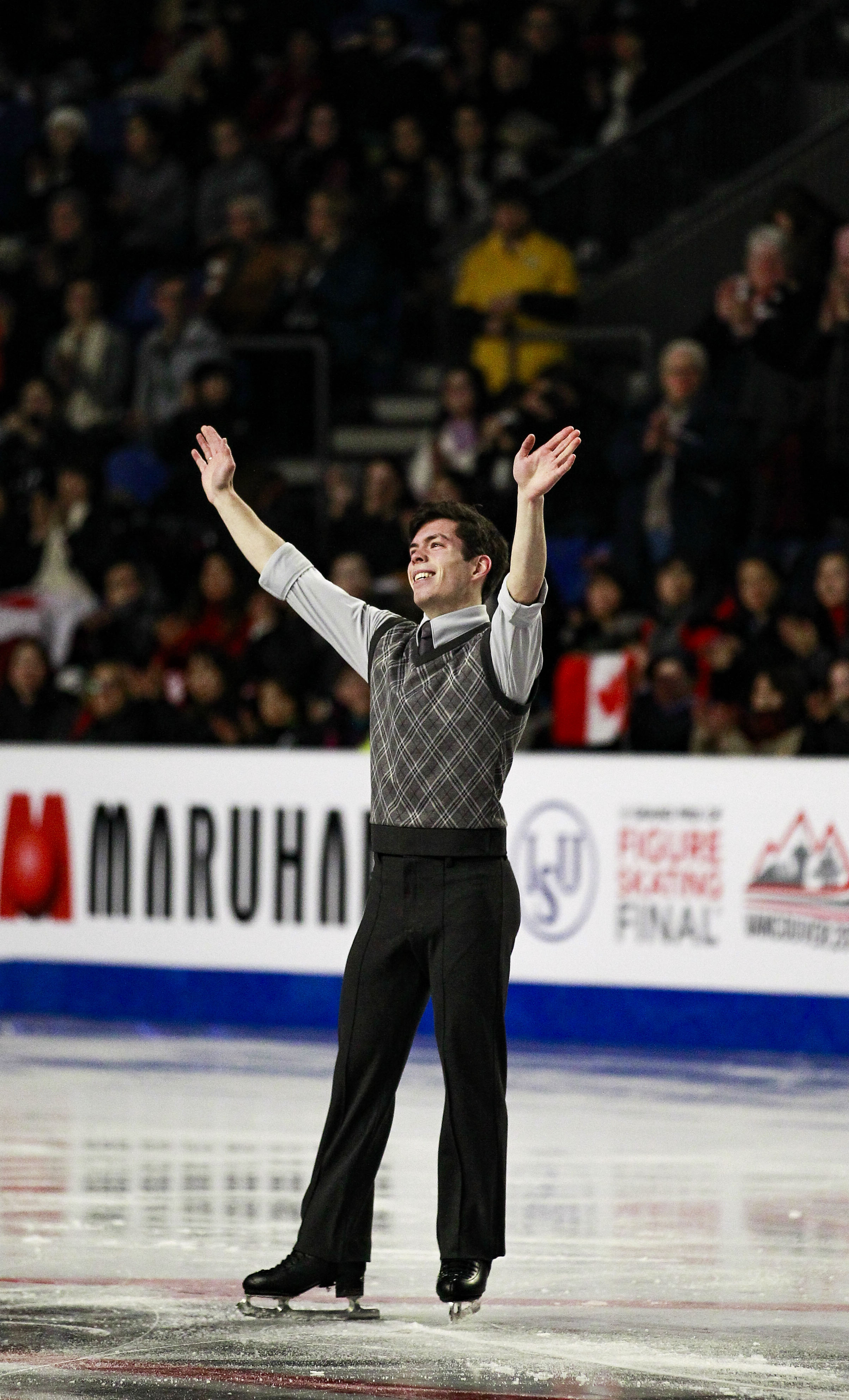 In fifth place, Russian Sergei Voronov was also having some issues with his quad toe loop, although he managed to stop himself from touching down. It was supposed to be a part of a combination, but with a shaky landing, he had to move his triple toe loop to his next jump: a triple toe. He cracked the 80 point mark with a 82.96.

Junhwan Cha of Korea seemed to have a problem with under-rotated jumps, getting that call for his opening jump — a quad Salchow — but skated a clean program otherwise. He earned 89.07 points, good enough for fourth after the short programs.

Czech skater Michal Brezina was a bit of a surprise this year, having missed out on the Grand Prix Final for the last six years. His entire skate was clean and his triple Axel was particularly well done. He is currently in third place after the short program with 89.21.

In second place, Shoma Uno of Japan had a particularly under-performed program, stepping out on his first jump, a quad flip. He also got an under-rotation call and slightly popped his triple toe in his quad toe, triple toe combo — making it only a double. With a cleanly landed his triple Axel, he scored 91.67, giving him some room for the long program on Friday evening. But it was his second lowest short program score of this season.

In first place, American Nathan Chen skated without any deductions or under-rotation calls, but lost the chance to do his jump combination — a planned quad toe, triple toe — when he had a shaky landing for his quad toe. It wasn’t the skate he was looking for, but he still placed first with a 92.99. 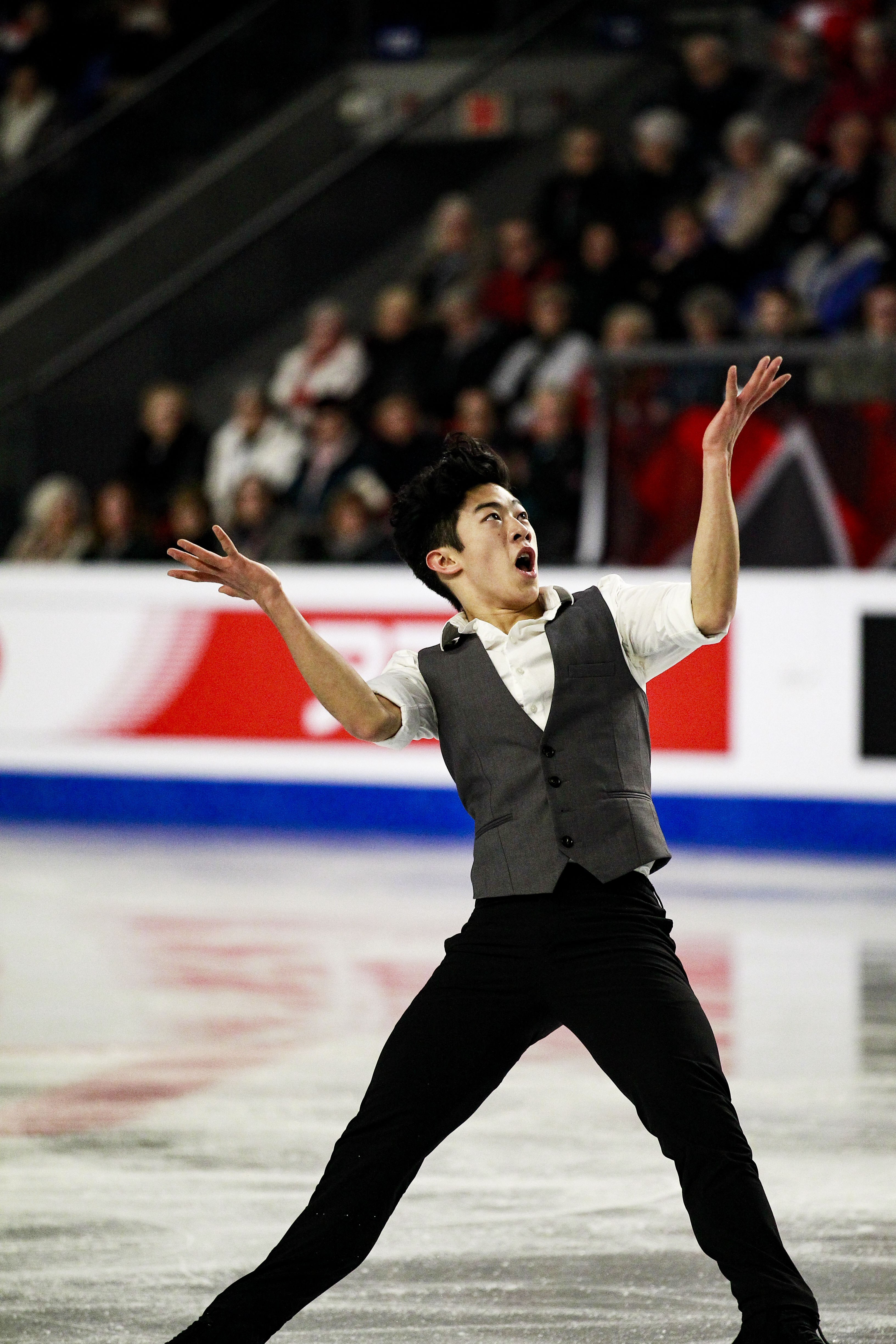 Satoko Miyahara was having some issues with her triple Lutz in practice and it seemed to carry over into competition, with an under-rotation call and an uneven landing forcing her to move her second jump in that planned combo — a triple toe — to her last jump, a triple loop. She wasn’t able get the jump she was looking for and her triple toe turned into a double toe. Beautiful artistry, but with a score of only 67.52, she’s in last place.

Russian Sofia Samodurova skated her program as well as she had all season, but with such a deep field of women this year, she’s getting a bit lost in the crowd. With a 68.24, she’s going into the free program in fifth place.

Kaori Sakamoto of Japan had a clean skate — without any calls or negative Grade of Executions — and had a particularly smooth entry into her last jump: a triple loop. While she seemed happy with her skate, the scores weren’t quite on her site: she earned a 70.23.

In third, Elizaveta Tuktamysheva preformed beautifully in her short. However, her triple Axel wasn’t as clean as she would have liked, earning her an under-rotation call from the judges. She ended the short with a 70.65.

In second place, Olympic gold medalist Alina Zagitova had a solid and clean skate. That said, she seems to be having some issues with her program this year, not really performing with the “wow” she had at the Olympics. She scored a 77.93.

Perhaps the biggest surprise of all this season is Rika Kihira of Japan. This is her first year on the senior level and she was originally only given one spot in the Grand Prix series. With this short, though, she truly showed us what she was capable of. Kihira was able to bring the crowd to its feet with her clean and well-performed triple Axel and triple Lutz. With a score of 82.51 — the highest of any ladies short program this season — she solidly claimed first in the short programs.

“It felt really good,” Gogolev said after his short. “I felt really confident going into the competition ... I’m just going to try to do my best [in the free skate].” 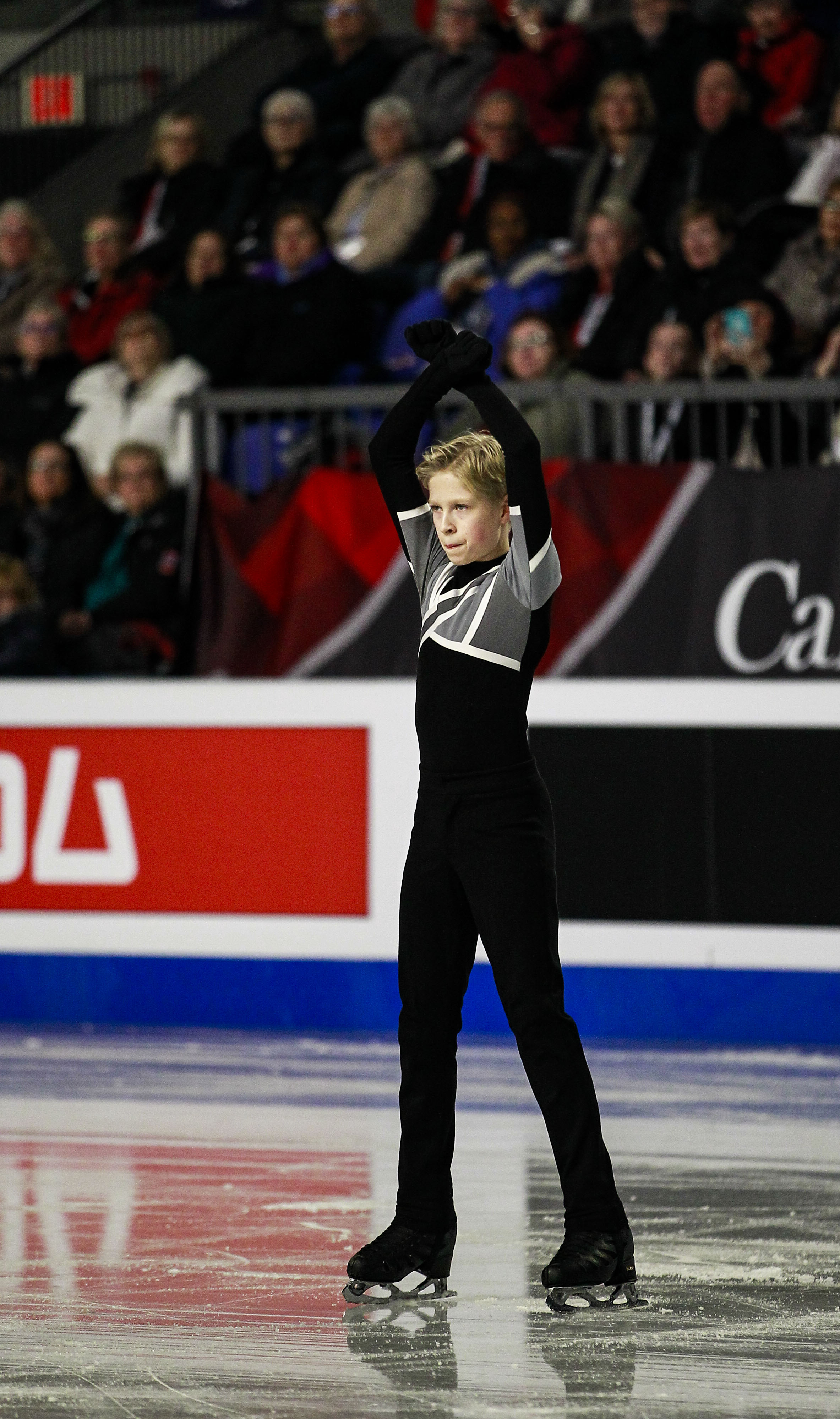 In Ice Dance, Canadian team Marjorie Lajoie and Zachary Lagha placed fourth in their short program, ending their first events outside of medal placing by a tiny 0.04 points. They have more than enough room in their free dance to take home a medal.

The Russians dominated the junior pairs event, taking first through fifth places and leaving the sole American team in last after they suffered a fall on their first triple twist flip.

Similar results came in the junior ladies’ event, where Korean skater Yelim Kim broke up the Russian skaters by placing fourth. Silver medalist of both Junior Worlds and Junior Grand Prix Alena Kostornaia solidly scored a 76.32, pulling ahead of Alexandra Trusov who had won both those events.

Ubyssey Sports is live-tweeting the Grand Prix Final throughout the weekend. For up-to-date results and analysis, follow @ubysseysports. 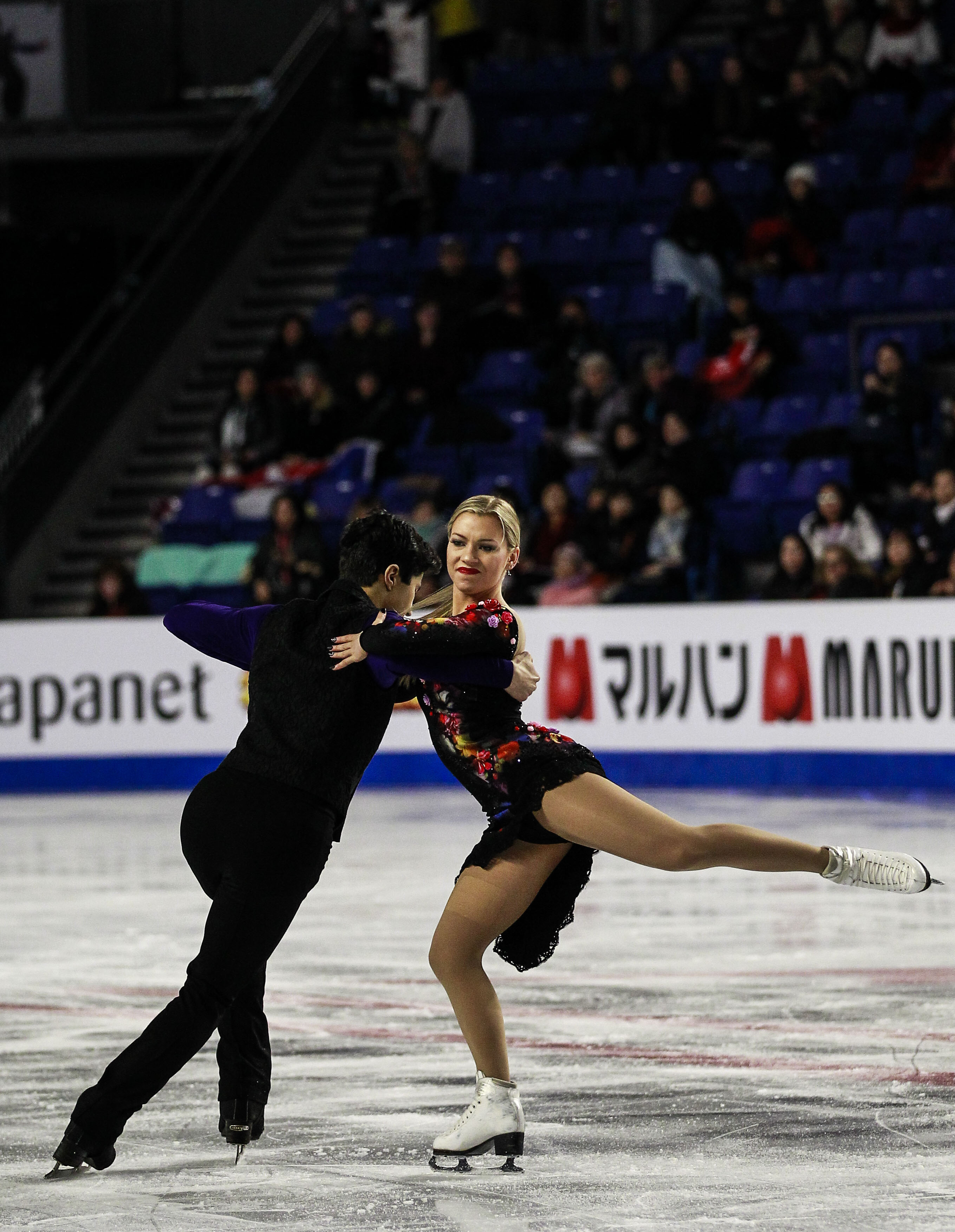