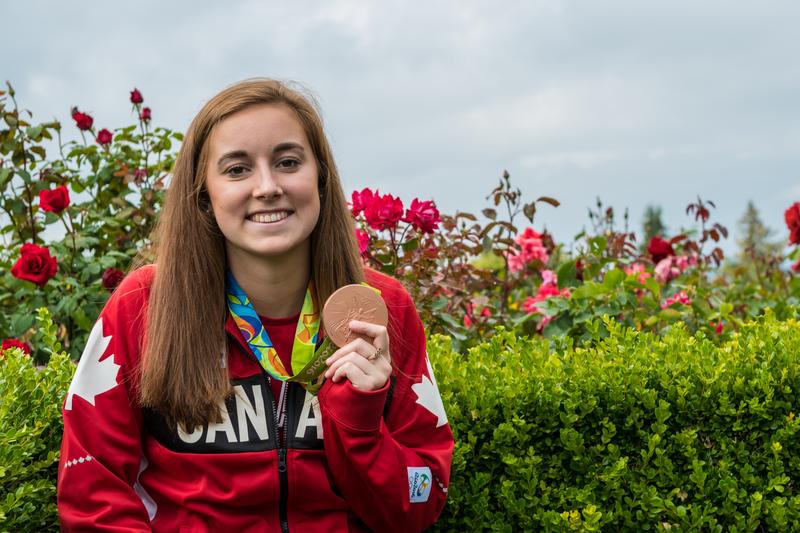 On day five of the 2016 Rio Olympics, the Canadian swim team made history once again, winning their first ever medal in the 4x200m women’s freestyle relay. But, as Penny Oleksiak touched the wall to earn Canada another bronze medal, history was also being made in the stands.

Sitting among the crowd in the Olympic Aquatics Stadium, UBC Thunderbird Emily Overholt had just won her first ever Olympic medal, having replaced one of the four relay swimmers in the preliminary heat of the event that morning.

“I thought my meet was over, and they called me up the night before and said that I needed to be ready just in case. It wasn’t until that morning that they told me I was for sure swimming. It was already a surprise to be a part of it,” Overholt said.

“Me and Kennedy Goss, one of the other girls that swam in the morning, were watching [the final] together and they were in it the whole way. It was so exciting to watch and when they won a medal, it was crazy because it was so surprising. They weren’t expected to.”

Going into Rio, the 18-year-old West Vancouver native was one to watch for Canada. Last year, Overholt made a name for herself in the pool after she won three medals at the Pan Am Games in Toronto, including a gold medal in the 400m freestyle. She also took home bronze in the 400m individual medley at the 2015 FINA World Championships.

Now, she holds one of Canada’s 22 medals from Rio and she hasn’t even started her post-secondary education.

“I don’t think it’s really sunk in yet. It’s weird, but now that I’m home, my life is kind of normal again. I’ve been really busy, but I don’t think it will sink in for a long time,” Overholt said of her new hardware.

The games in Brazil were also Overholt’s first ever Olympics — a pinnacle moment in any athlete’s career, let alone those just out of high school. Yet, the West Vancouver Otters alumni said she was surprisingly undaunted by the world-renowned event, or her first race on day one.

“It was weird because I wasn’t nervous at all, I was so excited. I hadn’t raced in months —that’s a really long time to go without racing, but I was injured so I couldn’t. So I was honestly just excited to get off the blocks and swim,” Overholt said of the walk into the stadium for her first heat. “When I walked out, I saw my brothers in the stands, so that was really cool.

“I didn’t really know what to expect going in, but I don’t think I realized how different it is from other swim meets,” she said of the overall Olympic experience. “I try to think of it as any other swim meet [and] just stay calm that way, but it was crazy. Anything can happen at the Olympics and I learned that for sure. There were so many disappointments and a lot of surprises too.”

Placing eighth in her first heat, Overholt was off to a steady start out the gate. Yet, a fifth-place finish in the final later that day wasn’t what she had hoped for. With that in mind, the Olympian is now looking forward to getting back in the pool and working towards the next Olympics in Tokyo. “I was kind of disappointed with my individual swims, so I think I’m just really excited to get back in the water and get training again, and looking forward to the next four years.”

She is also looking forward to school, after deferring last year to focus on her swimming.

“I’m really excited to start school, I took a year off last year and that was really hard,” Overholt said of her upcoming freshman year. “I’m also really excited to just be on the team — UBC has a really good team environment. I don’t train with them, but just being a part of the team I think is going to be really fun.”

For now, the Collingwood school graduate is taking a well-deserved break. “I have six weeks off, which is the most I’ve ever taken of swimming right now,” she said. “I’m just trying to get healthy and make sure my body recovers, and we’ll start the season again.”