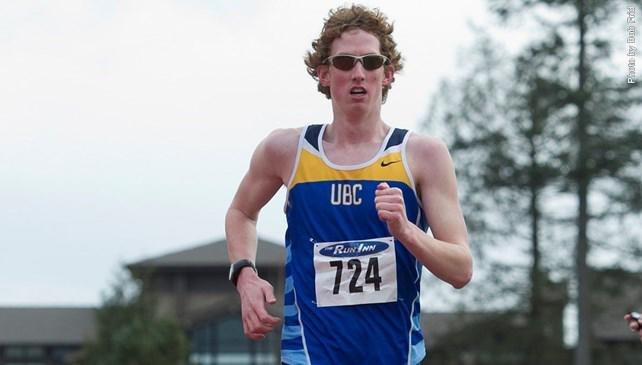 "I wasn’t worried that I wouldn’t be selected, but having it just box checked so early, now all my preparations can be focused on competing on the day in Tokyo, rather than trying to find another race to qualify" Photo courtesy UBC Athletics

Former Thunderbirds, Evan Dunfee, has earned an early nomination to his second Olympic ticket to Tokyo 2020.

Although COVID-19 had initially interrupted his normal training schedule, Dunfee looks forward to putting all his energy into working with his physiotherapist and strength coach as he heads towards the Tokyo 2020 Olympic Games.

“It’s a big relief. For my event, race walk, there’s only two of us in Canada that are in the position to qualify. So, one of those things, I wasn’t worried that I wouldn’t be selected, but having [the] box checked so early, now all my preparations can be focused on competing on the day in Tokyo, rather than trying to find another race to qualify,” Dunfee said.

The opening ceremony of Tokyo 2020 was originally planned for July 24, but due to COVID-19, the Olympic Games have been postponed, now starting on July 23, 2021.

Although this may be a setback for some, Dunfee hopes to use the extra year as an advantage for him to prepare for the Olympic games.

“It was absolutely the right decision and really happy to see Canada playing such a big part in forcing the hand of that decision to be made. It’s been really cool to see all the teams coming together and … all the athletes doing what they can to share positive stories or online workouts or whatever they can do to keep spirits up,” Dunfee said.

Dunfee’s first Olympics was at the Rio 2016 Olympic Games and he participated in the 20km and 50km race walk.

“I just wanted to test my body to see how long I can stay with the leaders. I had no business to be in the lead … If I collapse at 47km then so be it, that’s the way it goes,” said Dunfee as he recalled his experience at Rio 2016.

A couple of kilometers left to the finish line, the controversial “bump” from Hirooki Arai of Japan awarded Dunfee a bronze medal for a couple of hours after an appeal.

“It was hot in Rio. We are absolutely exhausted ... I went to pass him, a little bit too close, and got tangled up and, when you are that tired, a gust of wind knocks you over,” said Dunfee. “He barely touched me, but it was just an unfortunate circumstance where my legs were already in their last gas and then he kind of bucked. I composed myself enough to get to the finish line.”

Shortly after the race, there was an announcement on Athletics Canada’s Twitter account that they filed a protest about the “bump” and had won the appeal an hour later. This resulted in disqualification of Arai and put him in fourth place, but a bronze medal for Dunfee.

However, another announcement was made a couple hours later that Japanese team filed their own appeal and won, which put Dunfee back to fourth place.

"I talked to Hirooki after the race ... We chatted a little bit through his translator and had shared some kind words. I knew he didn’t do anything on purpose and knew there was no way to tell whether or not I would’ve beaten him anyways."

“I talked to Hirooki after the race ... We chatted a little bit through his translator and had shared some kind words. I knew he didn’t do anything on purpose and knew there was no way to tell whether or not I would’ve beaten him anyways. So, it didn’t seem to me, it’ll be the right thing to take his medal away from him and I was pretty happy with fourth place,” said Dunfee.

Beyond the sportsmanship displayed in his decision to not file another appeal, he also shared his positive energy to the team.

“That day and the next night, we had a number of fourth-place finishes for Canadians … We had maple medals and just had little, individual bottles of maple syrup on it. Anytime a Canadian athlete finishes fourth, we do like a big, full medal ceremony in the village and outside the Canada building,” recalled Dunfee as he chuckled. “You know, just own it because it is an amazing place to finish and no one should feel bad about finishing fourth. Just try to turn it around and make it into a more positive celebration rather than ‘Aw I was so close’ type of thing.”

With the fourth-place finish along with a Canadian 50km race walk record at Rio, Dunfee claims the possibility of a podium finish at Tokyo.

“I can go out with the same goal of giving my all … If I have the race that I know I can have, then I know a medal is possible,” said Dunfee.

This may mean having more weight on his shoulders, but for Dunfee, he enjoys being on the radar.

“I went into Rio never really knowing who I was and I wasn’t expected to do very much and what’s happening on the radar. And now I’m sort of one of the players being looked at and the potential for Canada … I love having that role, being able to share sort of my take on things and having that platform because it’s really nice,” said Dunfee.

"And now I’m sort of one of the players being looked at and the potential for Canada … I love having that role, being able to share sort of my take on things and having that platform because it’s really nice."

However, heading to Tokyo promises lonelier training sessions due to the absence of his two former teammates, also UBC alumni Inaki Gomez and Ben Thorne.

“We were training together and we spent years in the build up to Rio … So this one’s a lot more independence and a lot more lonely training sessions on my own.”

Nonetheless, Dunfee still has the support from the social circle he made at UBC as he heads towards Tokyo.

“In Rio, 15 to 20 UBC and SFU alumni came and supported while the UBC and SFU athletes were competing. They are going to be in Tokyo as well, at least a dozen of our friends and our teammates watching. On the race course, that certainly fuels you pretty heavily. So, it’s a great community that I’ve been lucky to be part of,” said Dunfee.

In 2014, Dunfee graduated from UBC with a bachelor’s degree in kinesiology and claims it has certainly helped him in his professional career now.

“I haven’t specifically gone into that area where I use that professionally, but I use it every day in my training … I’ve gotten to be part of different research studies, even speak at conferences,” said Dunfee.

When he was asked if he had any advice for the next “Dunfee” at UBC, he said, “The best advice or perspective I give to current students is take advantage of every opportunity you have. There’s so much at UBC I wish I had done, especially through the varsity program. I was just too shy or too nervous to put myself out there.”