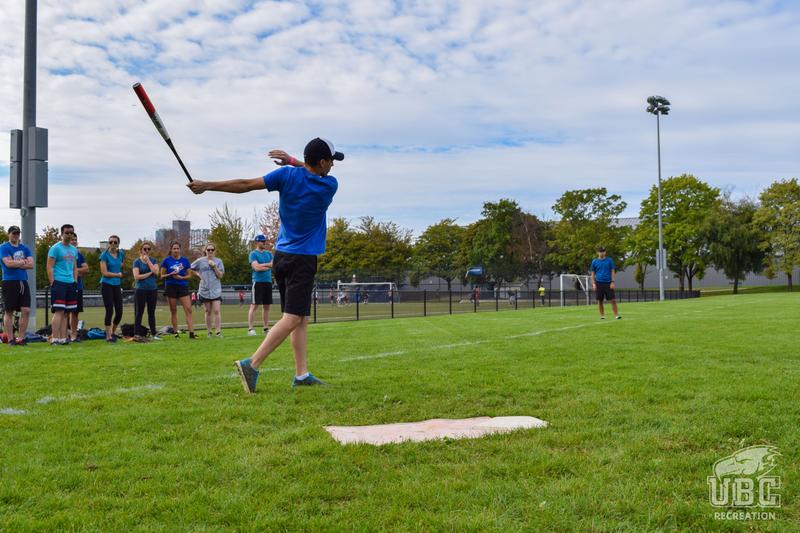 The Fall Softball Classic brings together 10 to 18 teams to face off against each other throughout the tournament day. Courtesy Ryan Lino/UBC Recreation Intramurals

After an afternoon of games on Friday, the 2017 Fall Softball Classic held by UBC Rec ended with the campus-wide match-up between the unrelenting Brewjays and the unconquerable Jeters Never Prosper.

The cloudy sky that afternoon would soon reflect the blood, sweat and tears left on the softball diamond.

The first batter stepped up to the plate for the Brewjays, top of the first inning, with fire in their eyes. The Jeters refused to give up ground as the shortstop made a mind-blowing shoestring catch. Minutes later, a Brewjays player slid into second and a heated debate began as to whether sliding was even allowed in the Softball Classic.

Despite the wall that was the Jeters’ defense, the Brewjays cranked a three-run homerun to start the scoring.

Jeters Never Prosper refused to back down. Already with two outs in the bottom of the inning, a Jeters’ player scored on a down-the-line hit. A second runner followed suit as he rounded third at just under Mach-3, beating the throw by a microscopic margin to get over home plate.

After one inning, the score was 3-2 Brewjays.

The top of the second saw the first error of the game — a groundball error in the infield by the Jeters. To make up for it, the Jeters buried their emotions and allowed no Brewjays to score. A groundout, flyout and blistering strikeout left the Brewjays gasping for air but still leading.

Jeters were on fire by then, with confidence running through them like mercury. After two solid singles, the ringer stepped up and set a record for biggest hit in the 2017 Fall Softball Classic. Three runs were scored to set the Jeters up 5-3.

Even with the setback in scoreline, Brewjays always find their fire — as the saying goes — and they did indeed. With both teams refusing to give any more ground, the third inning passed without any scoring. The final inning of the legendary matchup dawned, with Jeters Never Prosper leading 5-3.

The Jeters held true, but a ball to right field let a Brewjays player on to base, setting up the powerhouse batter known only as Steve for a strong showing as he stepped up to the plate. One two-run homer later and it seemed that the Brewjays might have done the impossible.

Jeters quenched that dream with their first batter and a one-run homer tying the game.

The other saying, however, is Brewjays never give up — which once again held true. As the Brewjays got two outs in quick succession it seemed the game might end in a tie, when She — so hallowed is Her name that it is no longer permitted to be spoken among mortals — stepped up to bat.

With a man on third She lofted a ball gently into left field, uncaught, and scored the winning run with a walk-off single. Jeters Never Prosper clinched the win 7-6.

When asked about the match-up post game, a player from the winning team described the event as great, the competition as challenging and the ball as “soft, but not too soft.”

The Fall Softball Classic tournament occurs every year at the beginning of the school year and is put on by UBC Recreation.