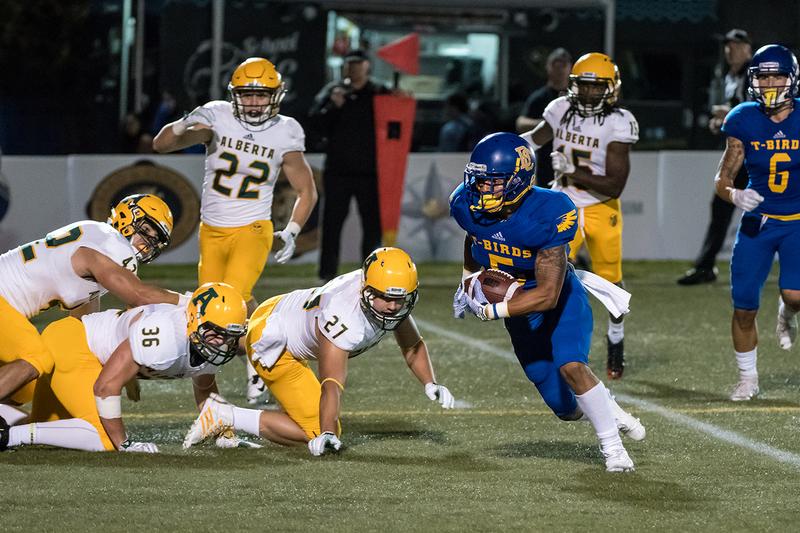 After a crushing 50-7 defeat against the Manitoba Bisons in the exhibition game, UBC football earned its redemption by beating the Alberta Golden Bears 39-24 at home in the season opener.

“I’ve been fairly familiar with the Alberta program and they’ve done a very good job building their program,” said UBC head coach Blake Nill. “What you saw this week was just a group who came out and played a little harder.”

The T-Birds were first to get onto the scoreboard four minutes into the game when UBC running back Kory Nagata rushed the ball into Alberta’s end zone from the 16-yard line. The game then entered into a stalemate until the Golden Bears found their way to the touchdown zone near the end of the first frame. Alberta’s points would come early in the second on a 26-yard field goal.

After a rather quiet first quarter, the start of the second frame saw some noticeably stronger momentum by both the T-Birds and the Golden Bears.

With UBC leading 7-3, T-Bird wide receiver Trivel Pinto doubled the home team’s score on a six-yard reception from quarterback Michael O’Connor. Less than a minute later, Colby Miller got the first touchdown for Alberta, narrowing the T-Birds’ lead to 14-10.

The T-Birds’ next touchdown came from tailback Marcus Davis before Alberta responded with another touchdown of its own, making the score 21-17. Right before halftime, UBC kicker Greg Hutchins scored a 38-yard field goal to put the ’Birds in front 24-17.

“We’re going to have to outscore teams until our defence starts to mesh and it’s almost like last year. We’ve had to replace guys and we got young kids in there,” said Nill.

After the excitement in the second, the third quarter was a low-scoring affair for both teams. The only points came from a 15-yard field goal by Hutchins midway into the frame, which happened after an initially strong drive by the T-Birds that ended in a third-and-goal situation.

Looking to narrow the T-Birds’ lead, the Golden Bears led an offensive drive late in the third, only to give it up on an interception by UBC defensive back Jordan Kennedy. The T-Birds’ ensuing offensive ended with another field goal by Hutchins early in the fourth.

Now leading 30-17, UBC added another nine points in the fourth quarter on a team safety and a six-yard reception by wide receiver Will Watson. The Golden Bears’ most impressive play of the night then came on a 68-yard run by quarterback Ben Kopczynski, making the final score 39-24.

“Despite that long run by [Kopczynski] then, which was disappointing, I thought the defence played well in the second half,” said Nill.

Off the field, the T-Birds’ victory touched the heart of Gilles Lepine - who became UBC’s new senior athletics director back in July.

“[The players] played with their heart because last week was a wake up call for everybody… It’s great for the program. Great things are coming for the Thunderbirds,” said Lepine.

UBC will play its next game on the road on Friday, September 9 against the University of Calgary Dinos.