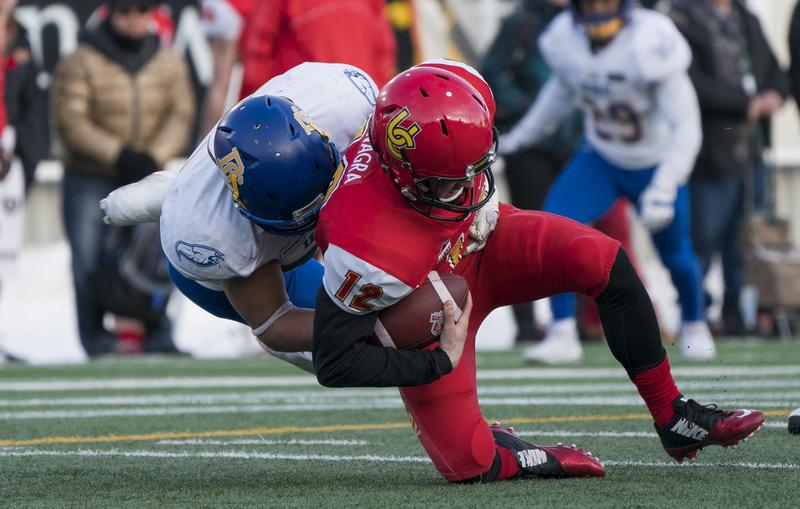 Three seconds into the game, Calgary took the first lead with a rouge point before UBC star running back Ben Cummings answered with a 54-yard touchdown two minutes later. The Dinos then responded with a team safety, touchdown and another rouge to take an 11-7 lead by the end of the first frame.

At the start of the second quarter, Calgary kicker Niko DiFonte picked up two field goals to increase the Dinos’ lead to 17-7. 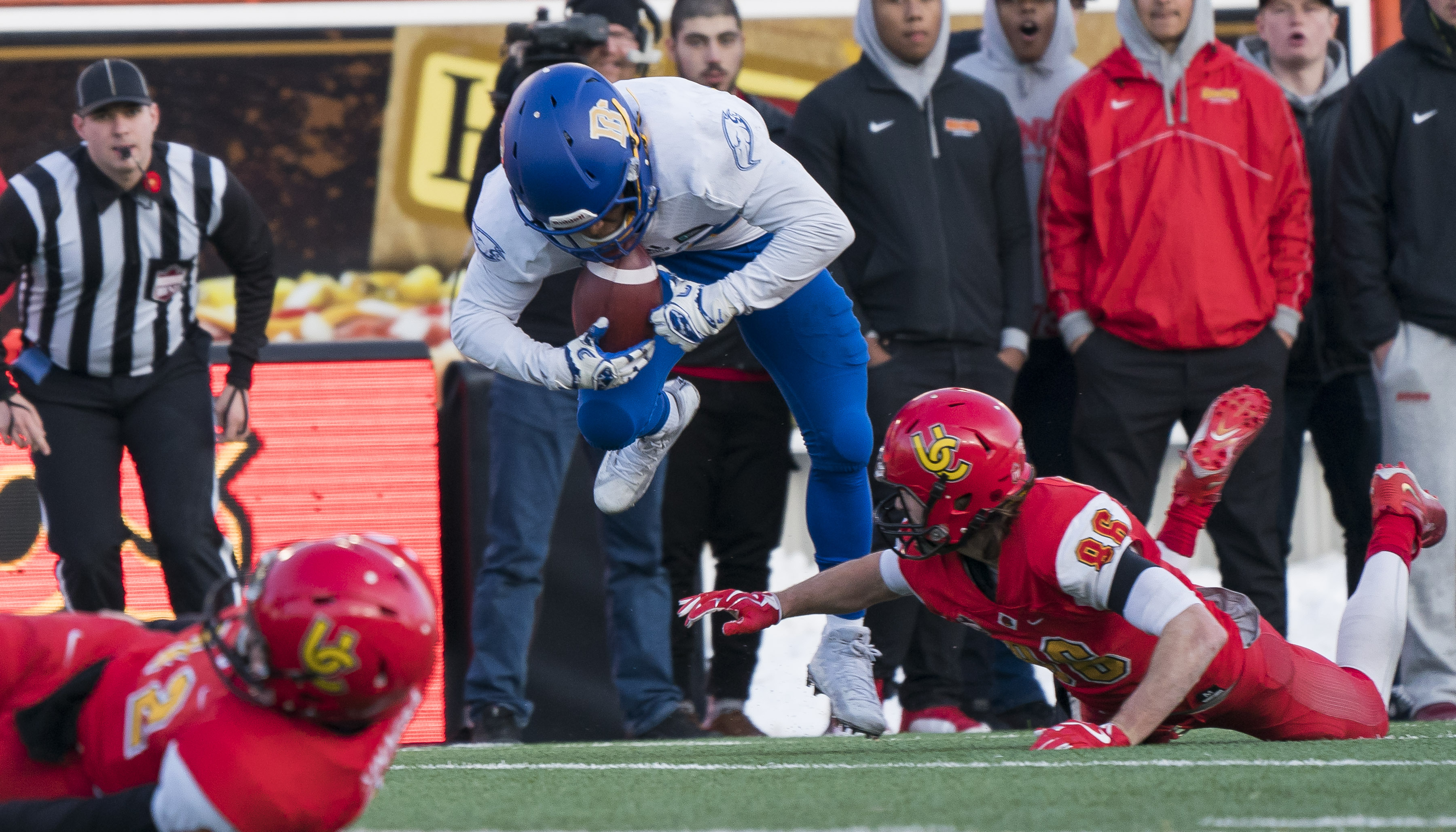 The ’Birds skip away from a low Dinos tackle. Courtesy Rich Lam/UBC Athletics

With three minutes remaining before halftime, T-Bird star receiver Trivel Pinto made a 51-yard play to reach the Dinos’ end zone before DiFonte successfully kicked the ball through the posts again in the final seconds.

With the 20-14 lead, the Dinos continued to show dominance in the third quarter, with receiver Richard Sindani picking up a touchdown before the team collected another rouge point seconds later on the ensuing kickoff.

The ’Birds caught up by a touchdown with a little over a minute left in the third, again on an impressive play. This time, T-Bird receiver Alex Morrison made a 40-yard play, narrowing Calgary’s lead to 28-21.

The fourth quarter was a high-scoring affair that saw a total of eight scoring plays.

DiFonte recorded his fourth field goal of the night to start, followed by two touchdowns from UBC’s Marshall Cook and Cummings in response. Cummings’s touchdown put UBC in the lead for the first time since the first quarter. 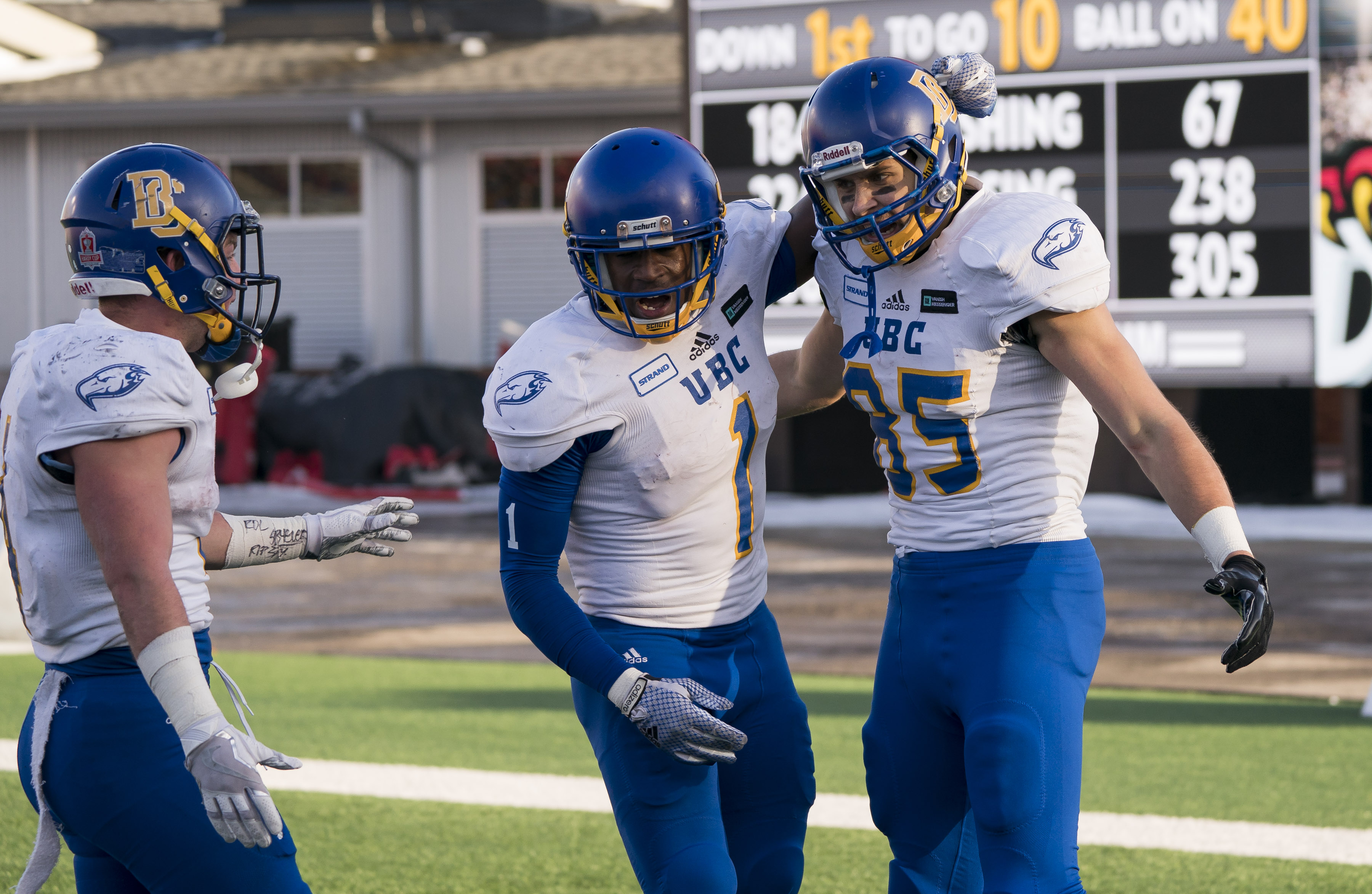 Intensity then peaked in the final seconds of the game when Morrison picked up his second touchdown. The ’Birds also had a team rouge, which put them back in the lead at 43-41. Still, a 59-yard field goal by DiFonte on the ensuing Calgary possession gave the Dinos the 44-43 win in the end — it was the longest successful field goal in U Sports history.

With the victory, the Dinos have won their eighth Hardy Cup in the last decade. The game was also the highest scoring Hardy Cup final in U Sports history, with a total of 87 points.

The ’Birds, on the other hand, head out of the playoffs and end their season in unceremonious fashion.