Written by Bill Situ
Nov. 9, 2015  ·  3 min read
The 'Birds are headed to the Canada West Championships against Calgary next weekend.

Coming off of a successful 6-2 record during the regular season, UBC football defeated the Manitoba Bisons 52-10 to advance to the Hardy Cup.

UBC had a strong start to the game when linebackers Yianni Cabylis and Mitch Barnett caught two interceptions for the T-Birds during the first four minutes of gameplay. Wide receiver Trivel Pinto then brought UBC onto the scoreboard with an eight-yard reception from Michael O’Connor.

Four minutes later, star running back Brandon Deschamps scored the next T-Birds touchdown on a 38-yard run to increase UBC’s lead to 14-0. Deschamps finished the game with an impressive 124 rushing yards for his third straight game with over 100 yards.

Deschamps again attributes his success on the field to the efforts of his offensive line teammates.

“I think it starts with the O-line.… Every week they get better, every week they’re picking up,” said Deschamps.

With less than a minute remaining in the first quarter, Manitoba conceded a safety to UBC to make the score 16-0. 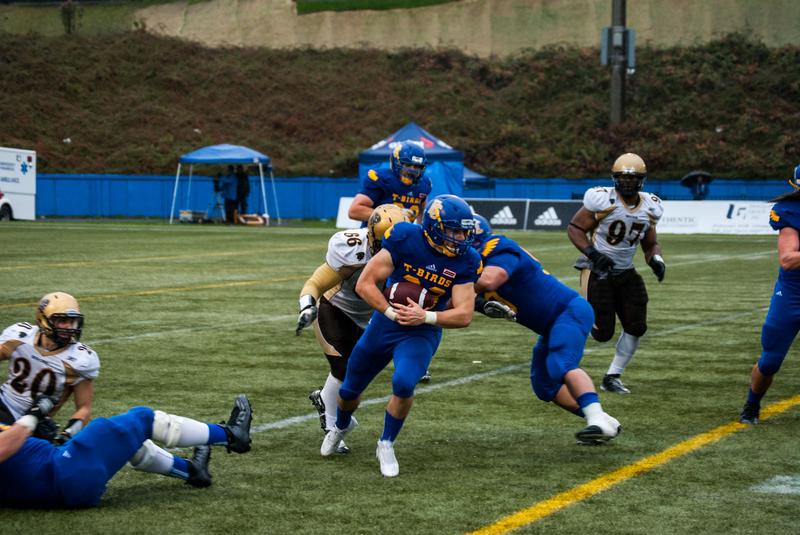 Early in the second quarter, Trivel Pinto caught a 46-yard pass from O’Connor that placed the T-Birds at the Bisons’ 9-yard line, but UBC missed the scoring opportunity as they fumbled the ball. Still, this did not slow the Thunderbirds as kicker Quinn van Gylswyck picked up two field goals in the quarter to make the score 22-0.

During the final minute of the second, Pinto scored another touchdown to give UBC a 29-0 lead by halftime.

As the Bisons’ struggle to gain ground continued, van Gylswyck scored another field goal to increase UBC’s lead to 32-0 midway in the third quarter. Receiver Alex Morrison also added a touchdown to make the score 39-0 by the end of the third.

“I thought our defensive coach just did a superb job preparing our athletes and it showed,” said Blake Nill, UBC's head coach.

After having failed to score earlier, Manitoba finally got onto the scoreboard early in the fourth with a team safety. Still, they were unable to gain momentum as Barnett caught his second interception of the game and ran it back for a touchdown. Van Gylswyck got two more field goals during the final quarter and finished the game with an impressive 20 points.

“The D-line got good pressure up front — forced to throw when the quarterback didn’t want to throw and I was just in the right place and right time,” said Barnett.

With UBC leading 52-2 near the end of the fourth quarter, the Bisons managed to score a touchdown to narrow the Thunderbirds’ final win to 52-10.

The T-Birds will face the Calgary Dino's on November 14 at McMahon field in Alberta.