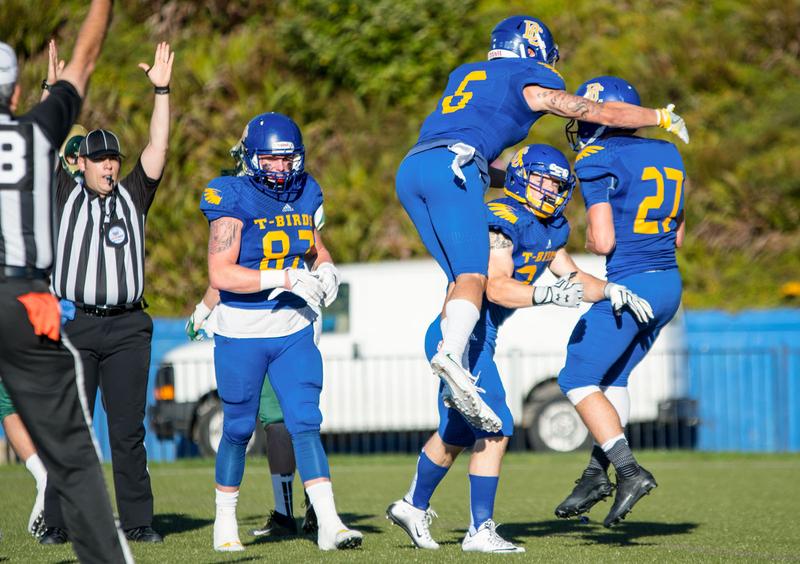 With the win, UBC sits in second place in Canada West. Jeremy Johnson-Silvers

After a tight 29-25 victory over the Saskatchewan Huskies last weekend, UBC's football team successfully stood their ground once again on Saturday afternoon, squeezing past the Manitoba Bisons 17-16 on the road.

The win puts the 'Birds on a two-game win streak — both from away games.

Manitoba was the first to get onto the scoreboard early in the first frame with a field goal by kicker Brad Mikoluff.

After that, and thanks to solid defence by both teams, neither team scored any points until the final three minutes of the period. At that point, T-Bird star receiver Trivel Pinto saw his moment in the spotlight, making an 80-yard play to score the first touchdown for UBC.

In the third quarter, the Bisons retook the lead with a touchdown by offensive lineman Anthony Daley and another field goal by Mikoluff. Toward the end of the frame, though, the 'Birds responded with a field goal by Greg Hutchins, narrowing the Bisons’ lead to 13-10.

Manitoba had another touchdown chance in the final minute of the half, but the score remained unchanged as T-Bird linebacker Stavros Katsantonis caught an interception on Bisons quarterback Des Catellier's pass at UBC's end zone.

The 'Birds would finally take the lead at the start of the third with a touchdown by second-year Cole Meyer. On the Bisons’ next possession, Katsantonis caught a second interception on Catellier's pass at the end zone, taking away another scoring opportunity from Manitoba and holding UBC’s marginal 17-13 lead into the final frame.

The fourth quarter again saw just one scoring play, which came from another field goal by Mikoluff. Katsantonis also recorded his third interception of the game later in the frame, but UBC wasn’t able to get on the scoreboard on any further plays.

The match up would end with UBC just one point ahead of the Bisons, taking the 17-16 win.

Although the game was a low-scoring affair, the 'Birds offensive line did record some impressive numbers. Running back Ben Cummings racked up an impressive 143 yards, while Pinto caught 136 yards from quarterback Michael O’Connor.

With the win against the Bisons, the 'Birds now hold a 5-2 record and place second in Canada West. They will return to their home field next week to take on the Regina Rams for their final regular season game.