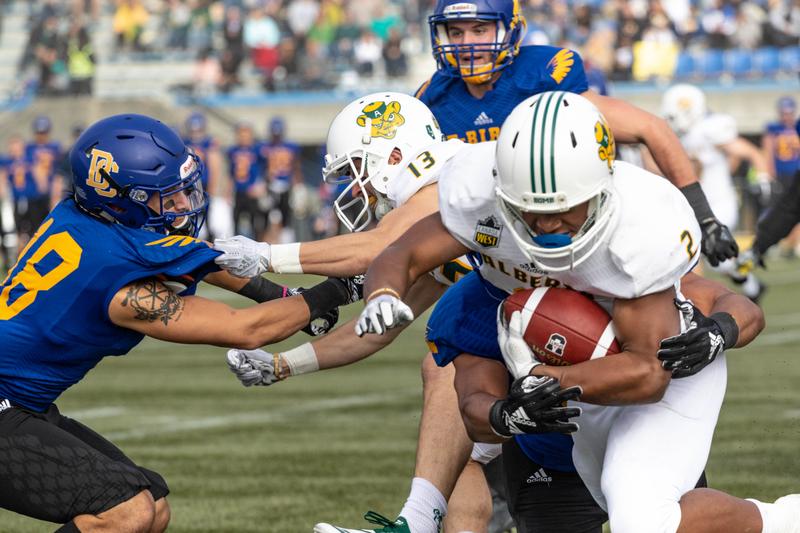 Stavros Katsantonis wrestles with a player in a game against the University of Alberta Golden Bears. File Salomon Micko Benrimoh

Update 12:30pm 23/5/2019: Stavros Katsantonis has been issued a four-year ban by U Sports making him ineligible to play university football until 2023. He still faces only a one-year ban from playing in the CFL.

Both players tested positive for Ligandrol, which is a selective androgen receptor modulator (SARM) that is meant to aid treatment for conditions like osteoporosis.

Katsantonis decided to opt out of the draft this year after initially deciding like Lee to stay in the draft. This means that he has accepted the results from his A sample and will serve a one-year suspension before being regaining eligibility for the 2020 CFL draft.

Lee, one of the highest touted defensive back going into the CFL draft on May 2, had decided to stay in the draft and was selected by the Calgary Stampeders with ninth pick of the fifth round (46th overall). He was originally expected to go somewhere in the second round.

By staying in the draft, Lee has requested a B sample to be taken. This allowed him to stay in the draft but still leaves him unable to sign with any CFL team until those B results come in.

It will be a few weeks until those results will come in. If they are to be found positive again, Lee would be handed a 365-day ban starting when the day the results come in, most likely leaving him unable to attend the Stampeders training camp this year or in 2020.

Gilles Lepine, senior athletics director for the UBC Thunderbirds, said in a statement to The Ubyssey that the department is aware of the situation and stressed its prohibition of performance enhancing drug use among its athletes.

"UBC ensures all Varsity student athletes complete annual drug education and the zero-tolerance message is clearly and consistently communicated to our student athletes by our coaches, strength and conditioning coaches and nutritionists," he said.

It marks the second time that UBC football players have failed a drug test in 2019. Back in February, star wide receiver Trivel Pinto was given a two year ban by the Canadian Centre for Ethics in Sports (CCES) for testing positive for cocaine.

Both Lee and Katsantonis could not be reached in time for comment.