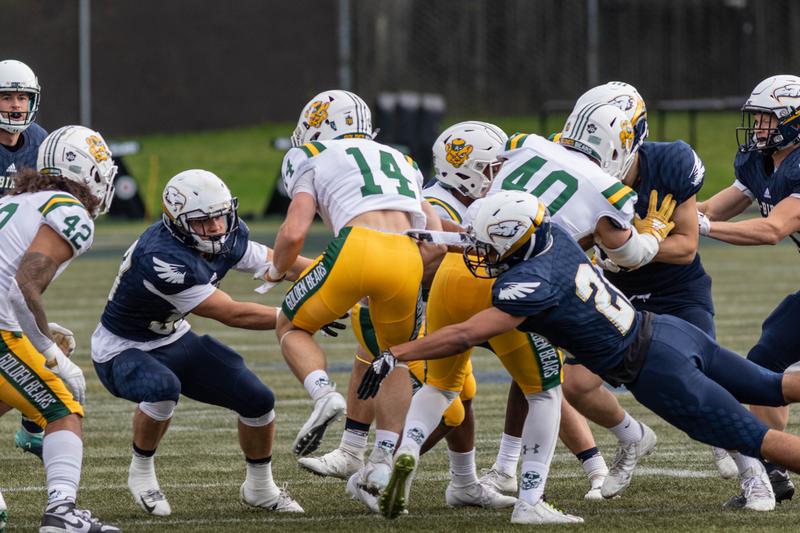 On Saturday, the Thunderbirds played some of the best football they have all season — for three quarters.

With three minutes remaining in the third quarter, the Thunderbirds were leading the undefeated University of Alberta Golden Bears 20–14. The Golden Bears then proceeded to score 26 unanswered points in 18 minutes, as the T-Birds lost by a final score of 40–20.

The loss drops UBC football’s record to 0–5 on the season.

Hope was bleak at the beginning, as the surging Golden Bears and their quarterback Brad Launhardt, who leads all of Canada West in passing yards coming into Saturday, opened the game with a 78-yard touchdown drive and put Alberta up 7–0.

That decision paid off immediately, as the ’Birds offence drove down to the Alberta 25-yard line and kicker Garrin McDonnell connected on a 30-yard field goal with 2:17 left in the first quarter. 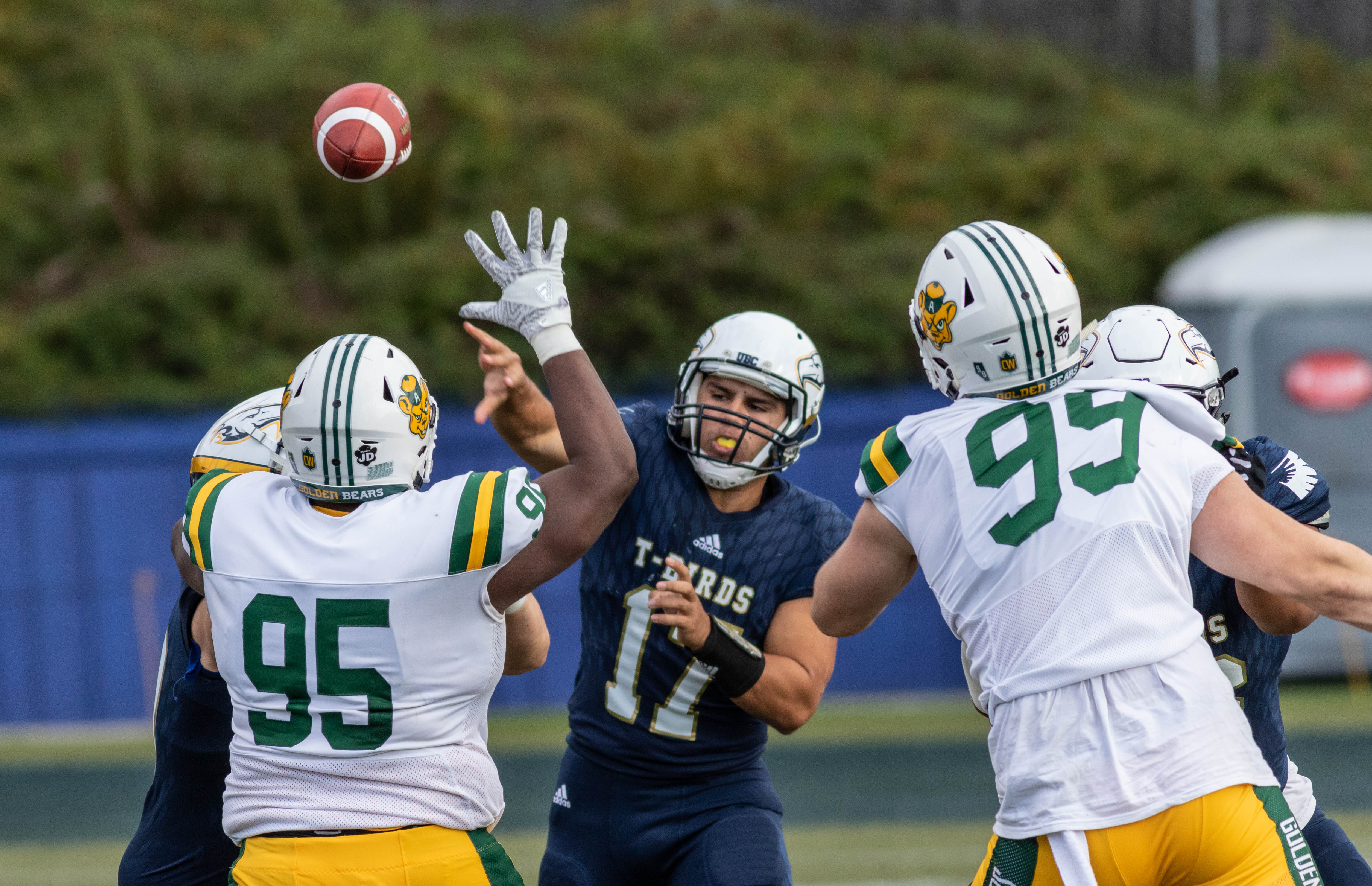 The only real positive to come out of this game is the breakout performance by QB Gabe Olivares. Salomon Micko Benrimoh

After two Alberta field goals, one UBC field goal and a one-point Alberta safety, the score stood at 14–6 in favour of the Golden Bears with 1:10 left in the second quarter. Olivares proceeded to drive the T-Birds offence 60 yards in just 51 seconds, connecting on five of six passes which included three straight first-down passes to receiver Jacob Patten.

Olivares then ended the drive with a beautiful 15-yard touchdown pass to veteran receiver Trey Kellogg. After a successful extra point, the ’Birds went into halftime trailing by only one point at 14–13.

Halfway through the third quarter, the Golden Bears muffed a punt return deep in their own territory, and first-year linebacker Mitchell Townsend recovered the fumble at the Alberta eight-yard line. After a five-yard illegal procedure penalty, Olivares capitalized on the Alberta mishap by again tossing a touchdown pass to Kellogg. After a successful extra point, the T-Birds were leading the Golden Bears 20-14.

At this point, momentum rested with the Thunderbirds and the home team seemed poised to finally claim their first win.

The home crowd was in a frenzy as the ’Birds stuffed Alberta’s very next offensive drive, forcing the Golden Bears to punt from deep in their own territory at the 10-yard line. 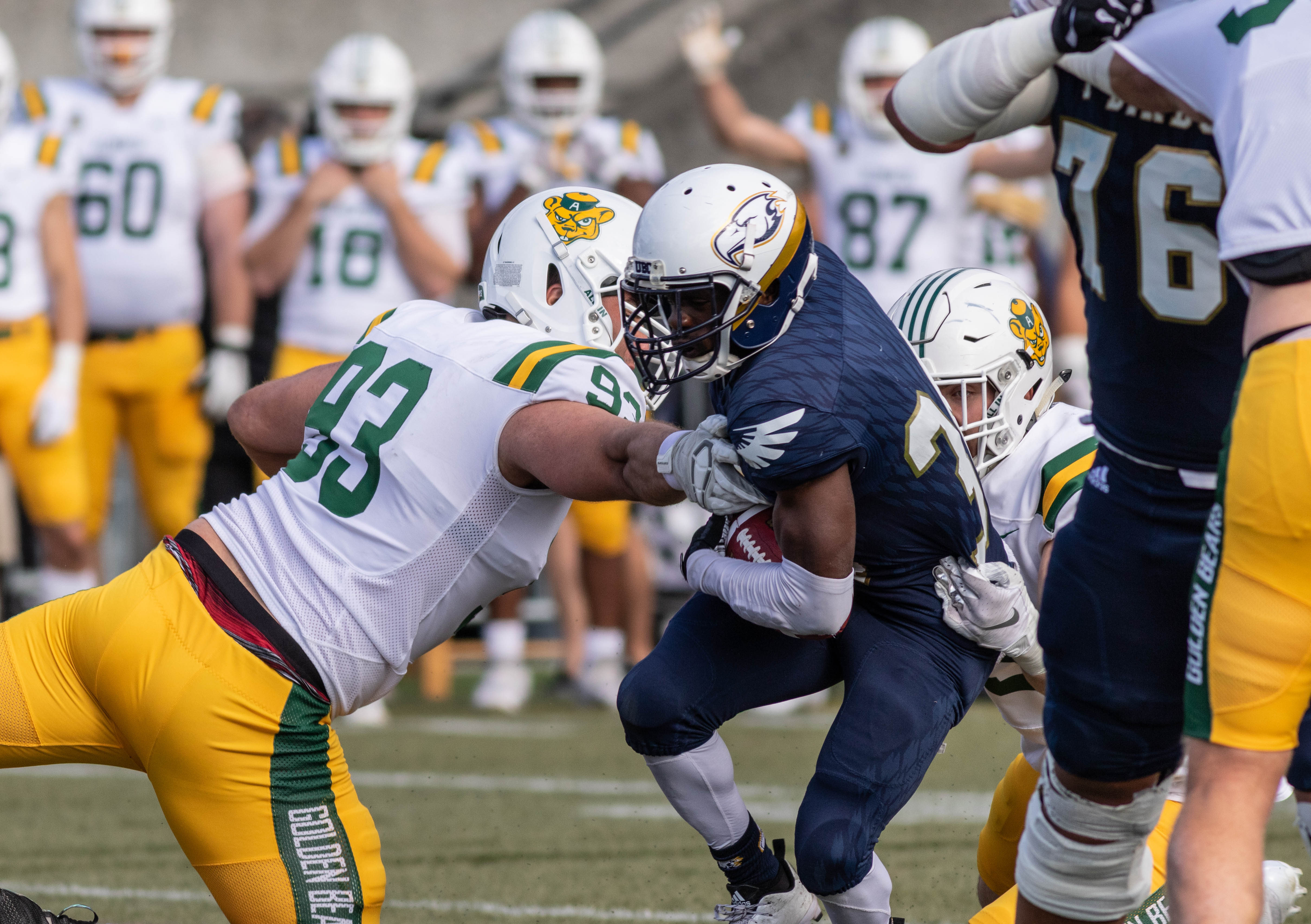 The T-Birds found ways to get past the undefeated Golden Bears' defence throughout the game. Salomon Micko Benrimoh

Nobody on the sidelines could have predicted the collapse that was imminent for the T-Birds.

The next drive resulted in what could conservatively be called the worst play of the season.

The T-Birds started their drive on their own 35-yard line, quickly picking up a first down on a Sharique Khan 10-yard rush. After two short passes, it was 3rd and 2 on the Alberta 37-yard line with a shade over 2.5 minutes left in the third quarter.

Coach Blake Nill sent out McDonnell to attempt a 44-yard field goal, only to shift formation at the line, direct snap to Kellogg under center and attempt a rush to the left side. Kellogg was stuffed for no gain, and the ’Birds turned the ball over back to the Golden Bears.

Alberta capitalized as they drove 63 yards in under three minutes, scoring on an 8-yard touchdown pass to Tyler Turner. 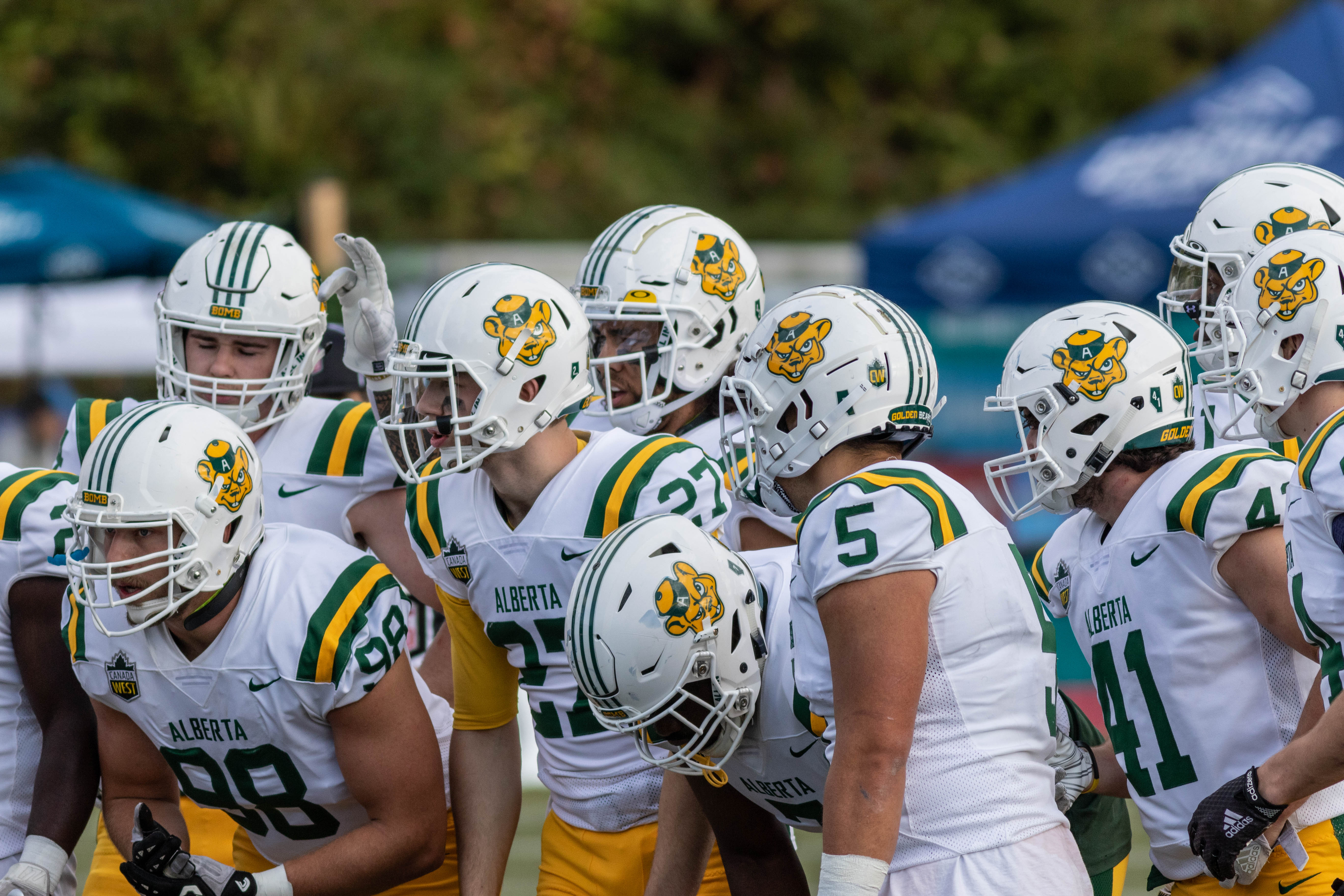 The Alberta stop-and-score left the once-energized UBC crowd in a much quieter state and everybody in the stadium was left pondering the 3rd and 2 call.

The remainder of the game was a comedy of errors for the ’Birds. They muffed a kickoff return that ended in an Alberta field goal.

It was still only a one-score game when the ’Birds defence made a goal-line stop and forced a turnover on downs at their own one-yard line.

Unfortunately, Olivares threw an interception directly after the turnover, ruining what was otherwise a very good performance.

Tyler Turner caught another touchdown pass, and Alberta knocked back two more field goals in the final quarter to bring the final score to 40–20.