T-Birds fall 40–7 to Huskies, worsen record to 0–2 and last in Canada West 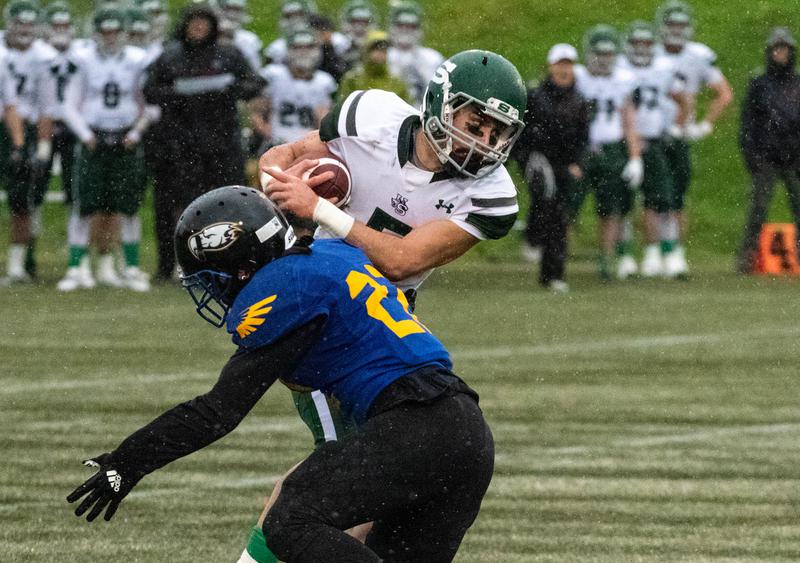 The Thunderbirds are going into this weekend's Homecoming game against Calgary with a 0-2 record in Canada West. File Salomon Micko Benrimoh

The game opened with a 10-minute stalemate where both sides failed to put points on the board. With five minutes remaining on the clock, Saskatchewan running back Adam Machart completed an impressive 63-yard rush to put the Huskies in the lead.

Three minutes into the second quarter, the ’Birds managed to even the score. After 10 plays, UBC receiver Adam Patten caught a 12-yard pass from rookie quarterback Tommy Yanchuck. Still, the ’Birds fell behind again only three minutes later on a field goal by Saskatchewan’s David Solie.

Toward halftime, the Huskies extended their lead to 17–7 with a touchdown by Mason Nyhus. Looking to make up some ground, the ’Birds started the third quarter looking to take advantage of an early and unsuccessful drive attempt by the Huskies.

Still, UBC fumbled early in the ensuing possession. The third period ended in another scoreless affair, keeping the score at 17–7.

It was in the fourth quarter that the ’Birds really began to suffer. Four minutes into the period, Machart picked up his second touchdown of the night, putting Saskatchewan up by 17 points with a score of 24–7.

The ’Birds very quickly turned the ball over on the ensuing possession, which the Huskies capitalized on with a 75-yard punt return by receiver Daniel Perry. However, UBC’s woes still did not end there. On Saskatchewan’s next turn on offence, Solie successfully scored a 34-yard field goal, bringing the Huskies up 34–7.

With less than a minute remaining in the game, UBC was just 15 yards away from Saskatchewan’s end zone.

The ’Birds’ hopes of narrowing the Huskies lead vanished as Saskatchewan’s Nelson Lokombo intercepted second-year quarterback Gabe Olivares’s pass before returning 95 yards for a final touchdown, putting the final nail in the T-Birds’s coffin and their unsuccessful visit to Saskatoon.

Solie missed the conversion field goal attempt, but it didn’t make matters better for UBC as Saskatchewan came out on top with a final score of 40–7 and improved to a 1–1 record after losing to the University of Manitoba Bison last weekend.

On top of leading in the final score, the Huskies also led in many areas of offensive play. Nyhus successfully threw for 306 yards, while Yanchuck and Olivares combined for only 250 yards. Huskies running back Adam Machart alone rushed 136 yards, more than double that of the T-Birds combined 66 yards.

UBC now hold an 0–2 record and are dead last in the Canada West. The first-seed Calgary Dinos are next in line for Homecoming. To say the least, the ’Birds will have a massive challenge ahead of them if they want to pull off the upset of the century in front of thousands at Saturday’s Homecoming game.