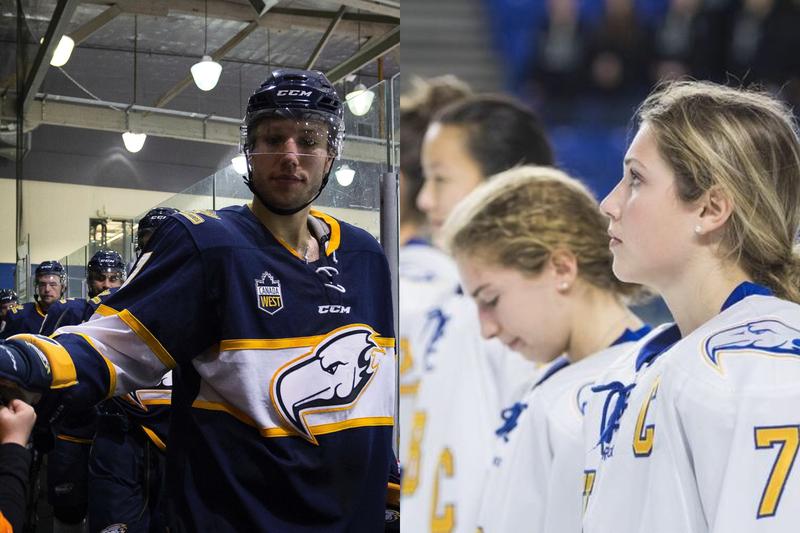 The new policy states that, should both teams be playing at home on the same playoff weekend, the team with the highest standing with have first choice of game time. File The Ubyssey

After a member of the women’s hockey team voiced concerns about gender inequality, UBC Athletics has introduced a new policy for hockey game scheduling that will decide game times based on league rankings.

Fourth-year player Mikayla Ogrodniczuk sent a tweet on Sunday that expressed her dissatisfaction with the way that the women’s hockey game was at an earlier, less crowd-conducive time than the men’s, despite the women’s team’s higher standing in the regular season.

When your team has to move their playoff games to accommodate the men’s team who finished lower in the standings. Gender equality? I think not. Another example of women at university being passed over for men. @ubcprez @UBC

While the women’s games on Friday and Saturday are scheduled for 4 p.m. and the men’s for 7:30 p.m., the women are going into the playoffs third in Canada West. The men finished in fourth place.

“UBC Athletics is committed to gender equity. Since the concerns were raised, UBC Athletics leadership met with the women’s hockey team where important and encouraging dialogue took place,” Senior Athletics Director Gilles Lepine wrote in a statement. “The valuable input that was shared in the conversation was beneficial for all involved.”

Going forward, a new scheduling policy will be followed during the hockey teams’ playoffs. If both teams are scheduled to play on the same day and at the same venue, the team with the highest ranking will have first choice of game time.

Ogrodniczuk declined to interview, but wrote in an emailed statement, “My team and I are pleased with the steps forward we have taken with UBC athletics and are very focused on our upcoming playoff games this week. We look forward to working closely with UBC athletics in the near future to continue to improve gender equality in sport.”

For hockey, a scheduling conflict like this is pretty atypical. With both teams placing in the top half of standings, both were given home ice advantage. Throughout the regular season, the teams never play at home on the same weekend — one team is always away while the other is at home. For many other varsity sports, this isn’t the case, such as volleyball and basketball which play one after the other each evening.

Women’s teams across the board typically play earlier, which can have advantages like getting players home earlier, but those might see lower turnout.

The change also brings up Winter Classic, arguably one of the most exciting nights of the year for UBC hockey, which for all five years of its existence has featured the men’s team — despite the women’s team consistently outperforming them.

UBC has committed to re-examining their current practices across all sports.

“Furthermore, in the off-season we will focus on reviewing our approach and criteria to scheduling that isn’t centred around what has been done in the past,” wrote Lepine. “We look forward to using the feedback we’ve received from student athletes and our community to improve the process going forward.”