“We were really upset about it and everybody else I feel was the exact same way about not getting the final chance to see how we ranked against all those top teams.”

Kyle Becker was excited. It was the night before his team played their first game in the U Sports men’s hockey national championships against the University of New Brunswick Varsity Reds. Because the game was in the morning, Becker was getting ready for bed early when he heard some people outside his hotel room.

Maybe the people were players from one of the two teams who had lost earlier that day, he thought.

Then he noticed the people were running. There was something going on, but Becker continued to get ready for bed. 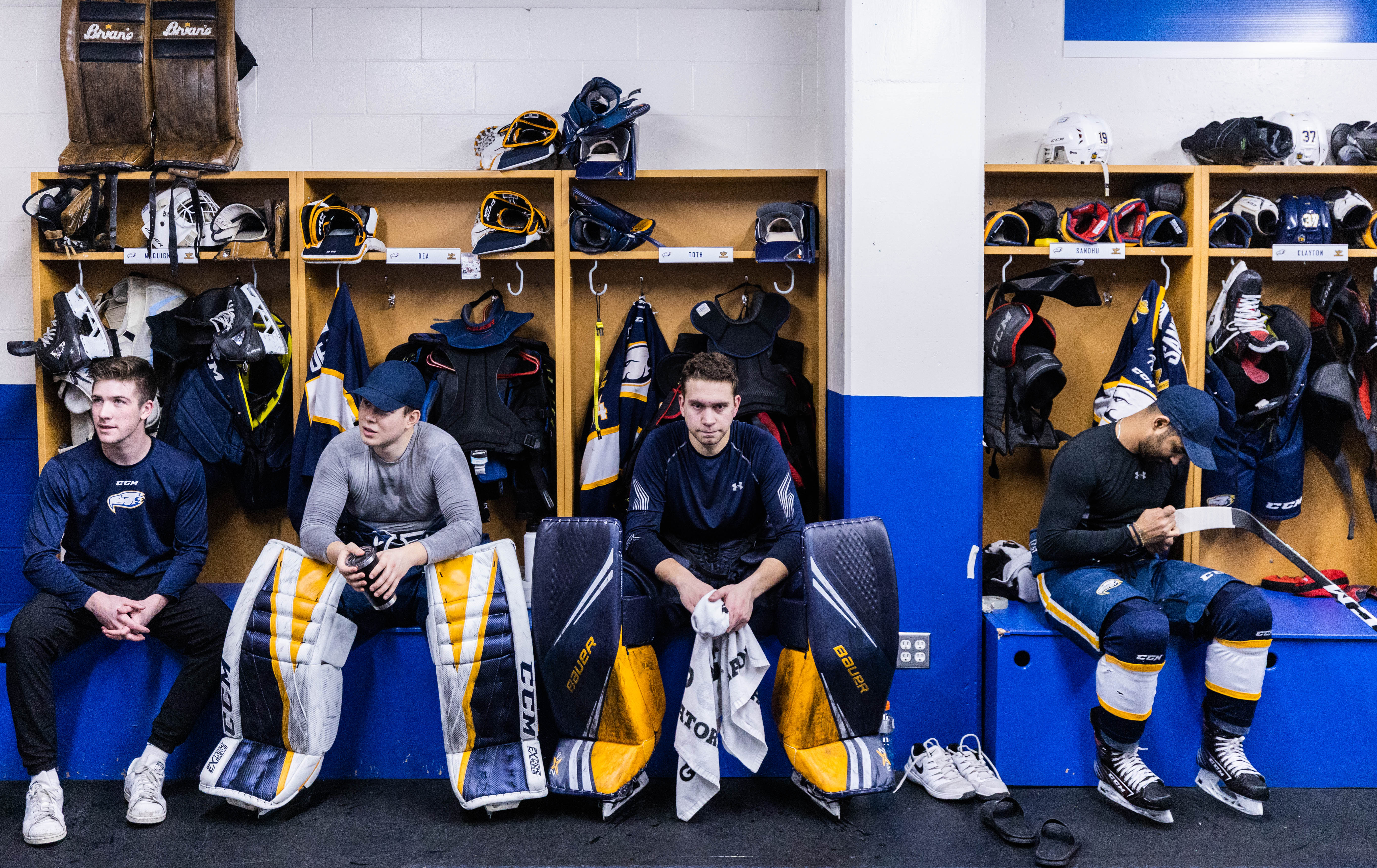 UBC goalie Rylan Toth did not hear the people in the halls because he was having dinner with his parents. Many of the parents and friends had made the cross-country journey to Halifax to surprise the team. It was a nice surprise considering UBC was the team who had travelled the farthest to make it to nationals — literally and figuratively.

Finishing the season as the fifth seed in the Canada West, not much was expected from the T-Birds in the playoffs. In fact, none of the players on the roster had won a playoff series in the Canada West division before this year.

Yet not only did they beat Mount Royal University Cougars in the first round, but provided the upset of the year with a stunning victory over the University of Alberta Golden Bears to clinch their spot in the nationals championships. 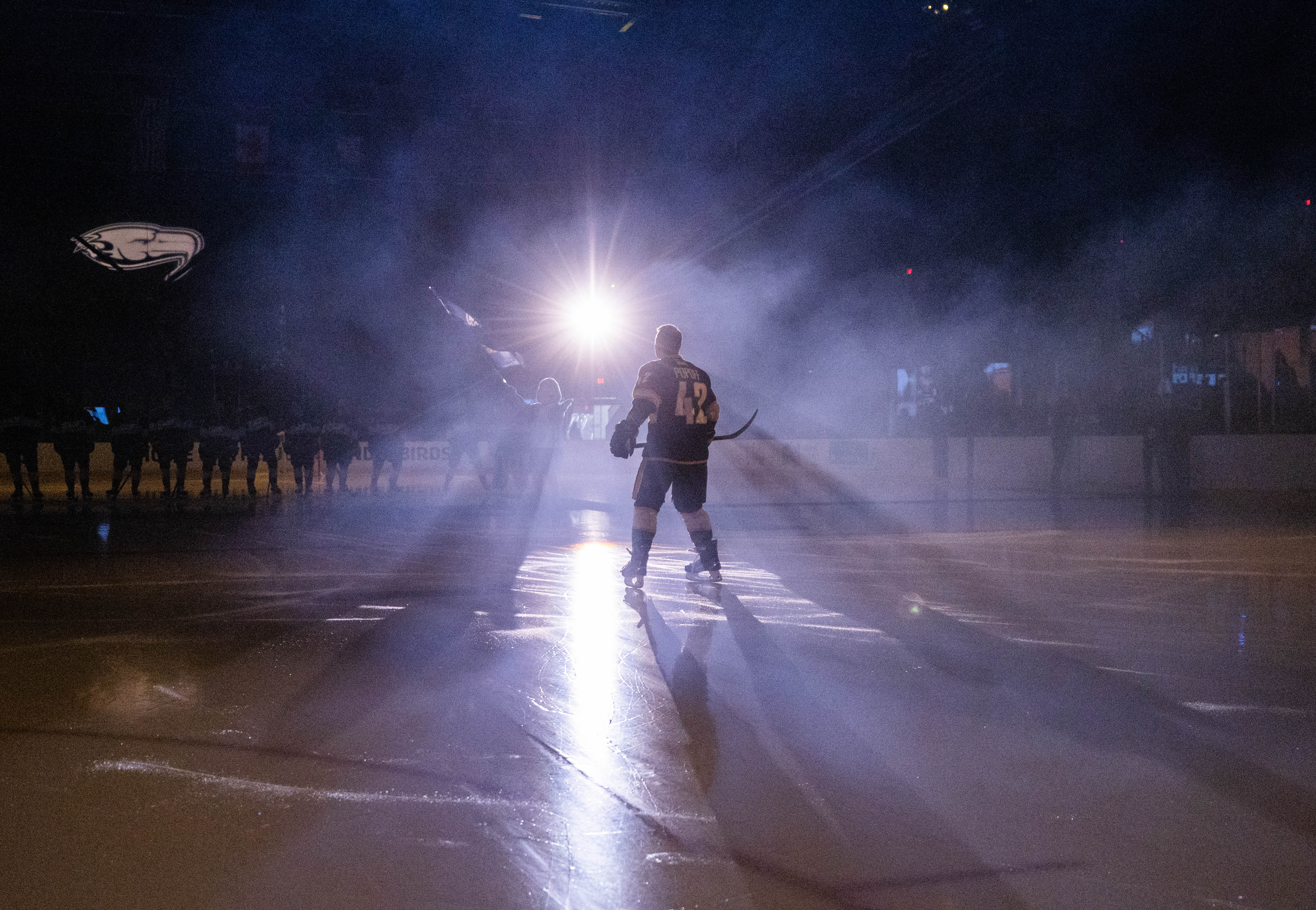 Carter Popoff being named out in front of fans at Winter Classic 2020. File Salomon Micko Benrimoh

A key player in that series against Alberta was Toth. In the first game, the UBC goalie made 51 saves to steal a 3-2 overtime win for UBC. Then after getting pulled in the second game, Toth bounced back in the third with another 40 saves to help his team win the series and eliminate the defending champions in their home arena.

Toth was looking forward to continuing his solid play against the number one ranked team in the country and help his team with their impressive run.

But as he was finishing his dinner, Toth found out the run was over.

“In the team group chat, [team captain] Jerret Smith texted that the tournament was done,” he said. “So, we went back to the hotel and met up with the team and the coaches were like ‘Yeah because of what’s going on they had to cancel [the tournament].’”

During the week, players and coaches believed that the tournament was going to be played, but once the COVID-19 pandemic forced major professional sporting leagues to postpone their seasons, everyone knew the inevitable was coming.

“It was a pretty sombre, devastating meeting. It was something that I’ll never forget.”

“I got a text at maybe 9 o’clock at night on Thursday, saying ‘All the coaches report to this room at the hotel’ and then the guys who were running the tournament told us at that moment,” Butenschön said. “It was a pretty sombre, devastating meeting. It was something that I’ll never forget.”

After hearing the news, Butenschön then called a team meeting to explain the situation to his players.

“I just felt bad for the older guys, [but] they took it well,” he said, referring to the fifth-year players Becker and Austin Vetterl. “They understood the gravity of everything. It was so global, the whole world is changing it was kind of hard to even think about hockey. I could see in their eyes — Kyle and Austin’s eyes — that they understood how massive this was and I got some strength from them because they handled it really well.”

As a graduating player, Becker was still saddened by the decision.

“We were really upset about it and everybody else, I feel, was the exact same way about not getting the final chance to see how we ranked against all those top teams.”

“I was pretty devastated,” Becker said when describing his first reaction to the news. “We were really upset about it and everybody else, I feel, was the exact same way about not getting the final chance to see how we ranked against all those top teams.”

Throughout the season, the T-Birds were never considered one of those top teams. At the start, there was some optimism that the team could compete for home-ice advantage in one of the early rounds of the Canada West playoffs. However, the first few months were filled more with injuries than wins, and the team struggled to score on a regular basis.

There were some bright moments. A strong home series against the lowly University of Lethbridge Pronghorns showed promise, but the team remained on the cusp of the playoffs and a sweep by the University of Regina Cougars in early January felt like the final blow to an already lost season.

The T-Birds kept battling, though. After a big 6-2 win over the University of Manitoba Bisons in the Winter Classic, the team started to gain some traction and finished the season with enough points to secure a playoff berth. From there, wins against Mount Royal and Alberta proved they were capable in the playoffs and they could win against contending teams.

Doubts were again raised after their performance in the Canada West final. In both of the games against the University of Saskatchewan Huskies, the score was competitive, but at times the T-Birds looked overwhelmed and outplayed. Moreover, entering the tournament as the lowest-ranked team reinforced the belief that the team was far from a championship contender.

Then again, this team was never one to back down from challenges.

Few thought that this T-Birds team was going to be the first UBC team since 1977 to qualify for nationals, but that didn’t stop them from proving them wrong. While some could say that the ’77 UBC team had more talent, they did not win a playoff series — this year’s team won two.

When asked what made the team succeed in their underdog role, Butenschön said it was because the team was motivated to win.

“We were sick of losing, sick of not meeting our expectations [while] knowing we had enough in our room to get the job done,“ he explained, mentioning that the team getting healthier, solid goal-tending and varied scoring were critical to the team’s success down the stretch. 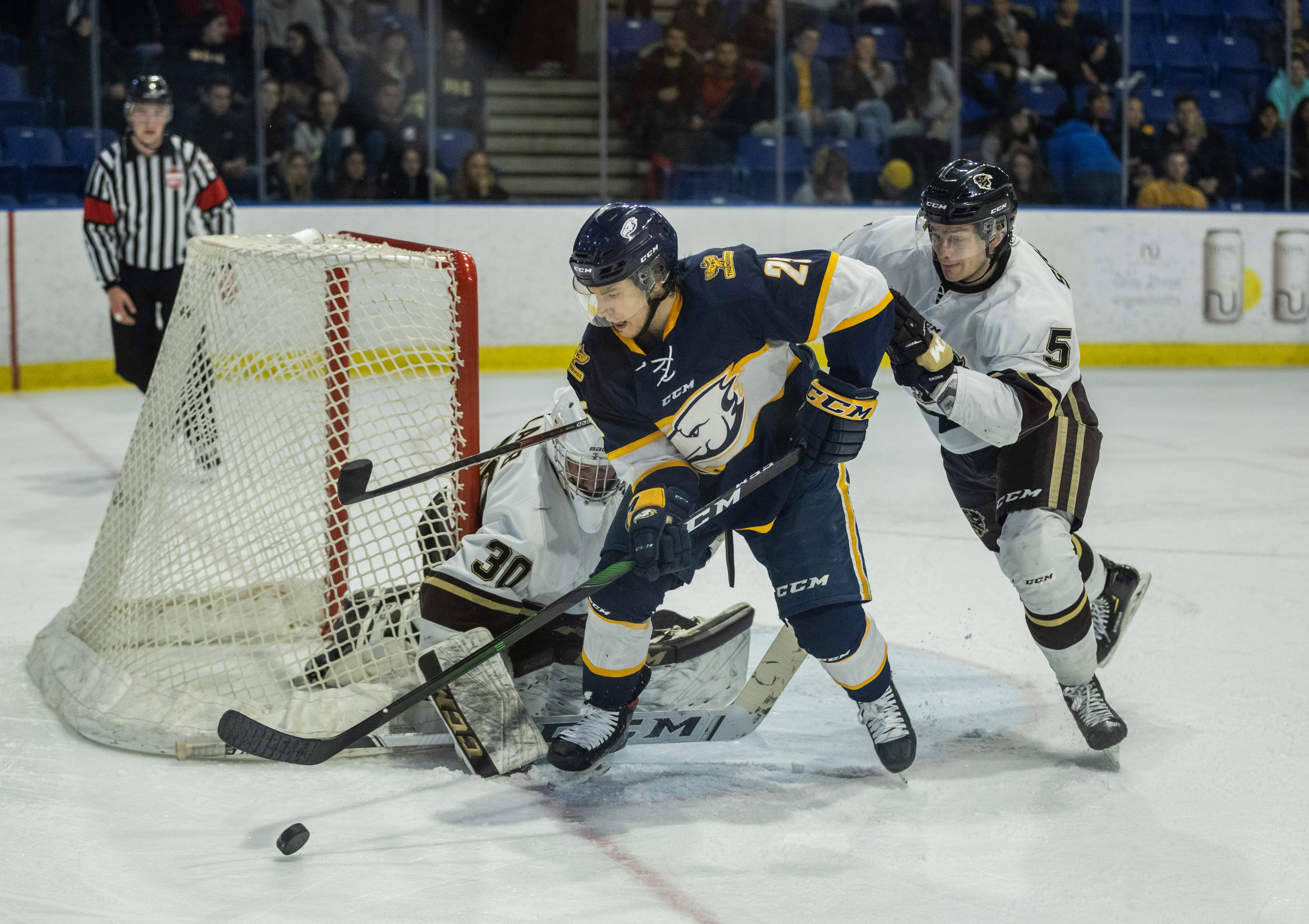 “[Going to nationals] is something you talk about in training camp and you set [as] your goals,” Butenschön added. “Our league is so competitive. Usually we’ve got 4 teams ranked in the top 10 in Canada — it's such a difficult conference to get out of.

“For us to beat Mount Royal, beat Alberta and go to the finals, it was a huge accomplishment and everyone was just so proud of the way the group battled together and came together in the end.”

Of course, these accomplishments mean a lot more when you are in your last year.

“Every year you play at UBC, you want to make nationals,” said Vetterl, the other graduating player on the roster. “But then the fifth year [is] just so much bigger because it’s your last year and you want to go out the right way. You want to go out [and] leave the program better than when you got there.

“Playing Alberta in the second round and beating arguably the best team in all of Canada was a great feeling and being able to go to nationals in my fifth year was a dream come true.” 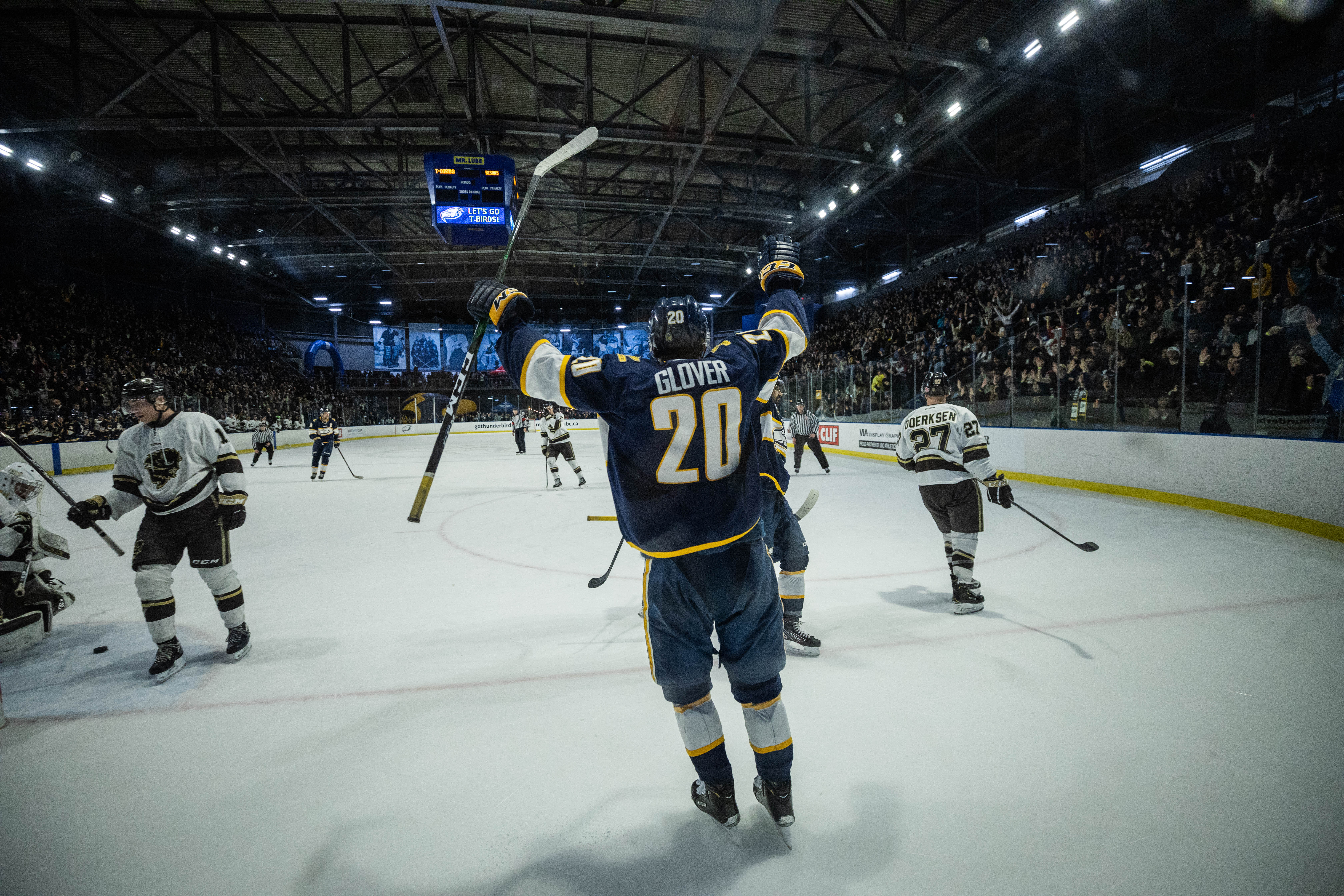 Although Vetterl thought the tournament was going to be cancelled, he was disappointed by the fact that he would not get another chance to play with his teammates.

“Our team [still] got there and knew we deserved to be there.”