Both teams will move on to face the University of Alberta in the Canada West semifinals. Salomon Micko Benrimoh

It was a big weekend for the men’s and women’s Thunderbird hockey teams as both squads won their Canada West quarterfinals in overtime thrillers.

The women’s team played the Saskatchewan Huskies. In both contests, the teams found themselves in overtime, with the Thunderbirds managing to sweep the Huskies in two tight finishes.

Merlis Belsher Place saw the visiting Thunderbirds clamber back, after falling down by two early in the first game. Momentum began to swing in favour of the ’Birds when Tiffany Chiu found the back of the net late in the second period on a power play opportunity.

The next time UBC made it on to the scoreboard was Hannah Koroll’s power-play goal. Both goals were assisted by a determined Mathea Fischer, who also scored the game winner in overtime off of a shot from Hannah Clayton-Carroll.

This ended the night at 3–2 in favour of the T-Birds.

​Moving into the second showing of the quarter-finals, the pressure was on as the Huskies pushed for a third meeting Sunday night, generating strong offensive pressure throughout the game that resulted in 38 shots on UBC netminder Tory Micklash.

But despite both teams producing solid opportunities, neither could find the back of the net leaving the scoreboard untouched until double-overtime. Clayton-Carroll, off of a deflection from Fischer, swiped in a shot past the five-hole of Huskies netminder Jessica Vance.

The seemingly endless contest finished with 1–0 decision, sending the Thunderbirds to the conference semi-finals where they will take on the University of Alberta Pandas. 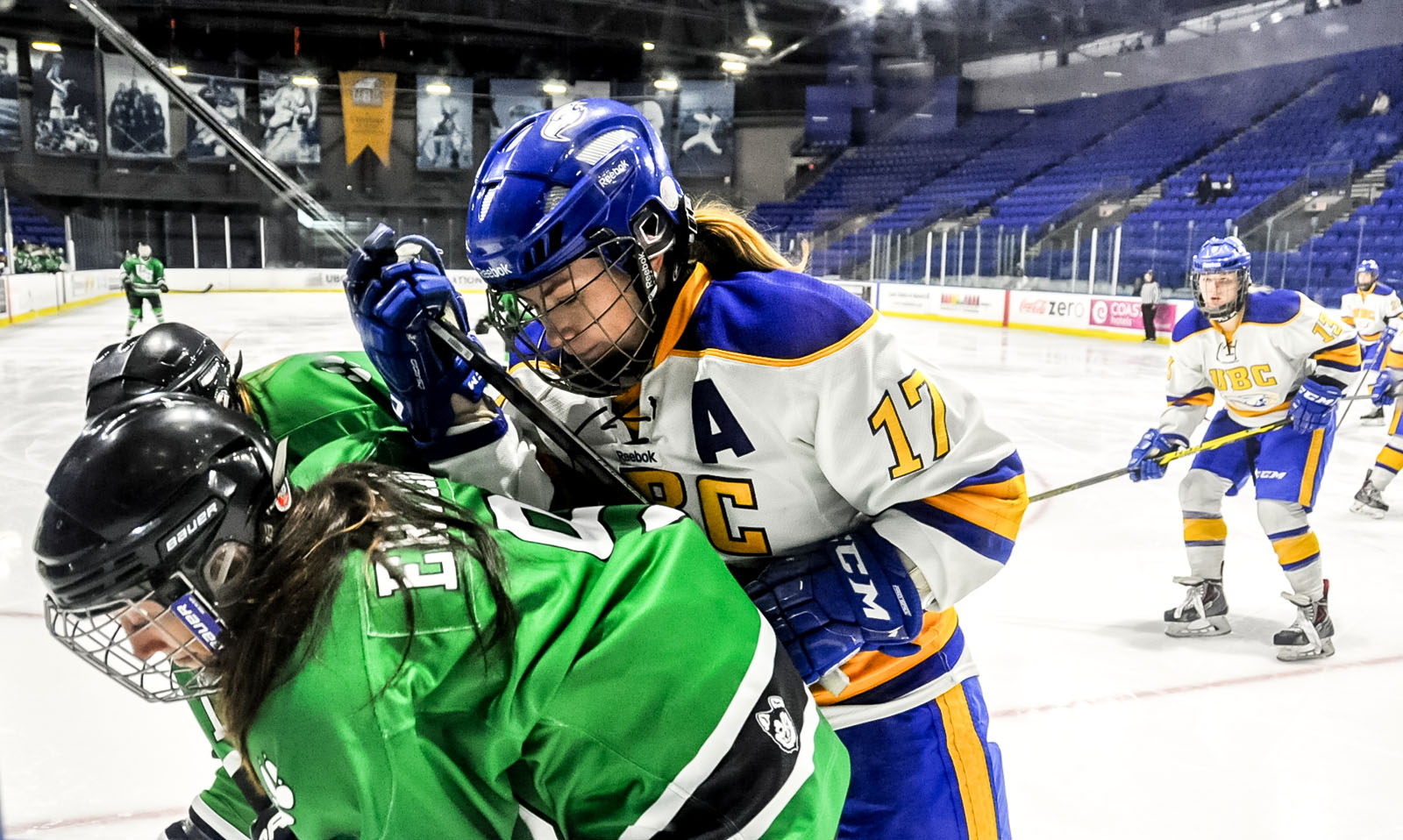 The 'Birds showed serious character and determination in their two OT wins against the Huskies. File Sofie Tsai

On the men’s side, coach Sven Butenschön’s squad got their revenge against the Mount Royal University Cougars.

Having ended last year with a winning record, the T-Birds were ousted of the Canada West playoffs by the Cougars in three games at UBC.

This year, playing in Calgary, the T-Birds would have the last word by winning the series in three games.

Game two on Saturday saw momentum shift back in favour of Mount Royal as the T-Birds couldn’t erase an early deficit and fell 5—3.

UBC would come out the gates swinging in the third game though, taking a 3—1 lead by the end of the first. The ’Birds did their best to hold off the Cougars as they went into the third period with a 4—2 lead, but the Cougars would strike twice against Toth and force overtime.

In the winner-take-all overtime period, fifth-year veteran Austin Vetterl core on a powerplay to send the team to the next round.

The ’Birds will face off against the Alberta Golden Bears this weekend in Edmonton with a trip to the conference championship on the line.