Match preview: Football needs to step it up on all fronts to win Homecoming 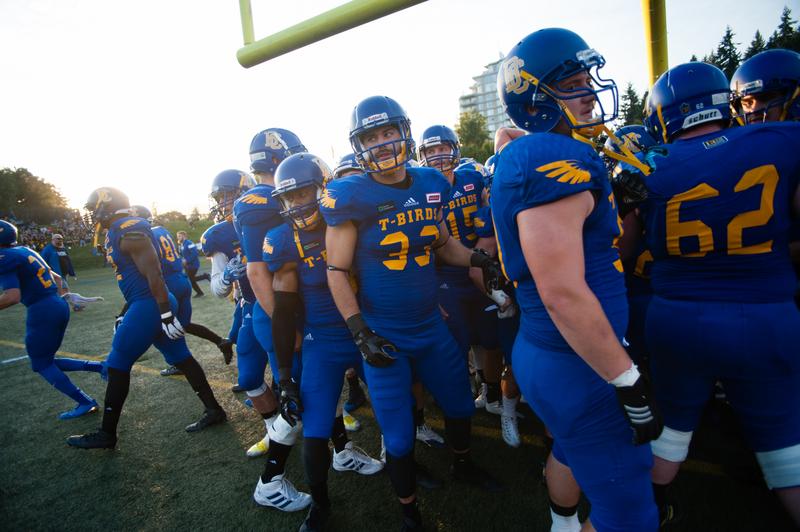 Homecoming weekend is finally here! And if there’s one thing we hope the notoriously rowdy UBC student body can agree on it’s this: winning the game is far more important than getting hammered and having a good time... right? Here’s how the Thunderbirds are going to accomplish that on Saturday evening — kick-off is at 5 p.m. sharp:

For whatever reason, UBC’s defense has regressed since last season despite adding talent. Through three games they have conceded 32 points per game in comparison to last years’ 21, including a 57-point stinker at the hands of team they play on Saturday at Homecoming: the Calgary Dinos. The T-Birds defense has allowed opponents to average 156 rushing yards per game.

Its base defense – a 3-4 cover 3 zone variation – is strong against the pass, but weak against the run. Using three defensive linemen to slant against five offensive linemen plus two tight-ends (a set Calgary loves to play) is challenging – the 0-technique nose tackle has to cover both A gaps, which against the pass is good, but against the run is bad. If you don’t understand that silly jargon, it basically means there are interior holes for the running backs to cut through.

To compensate for this, UBC run a variety of 4-3 and 5-2 man coverage packages, where it essentially ‘stacks the box’ and hopes to stuff the runner at the line of scrimmage. This presents a new problem for the ’Birds, especially when they face talented quarterbacks like Calgary’s Adam Sinagra. Since UBC commits seven or eight bodies to stop the run, they only have four or five in the secondary playing man-to-man. This means defenders have no support and a greater chance of surrendering big plays. Currently, the Thunderbirds haven’t addressed this problem very well, considering they give up 362 passing yards per game (as a benchmark, Calgary gives up 278).

The Dinos’ high-octane offense will be ready to roll on Saturday and the T-Birds will have to reciprocate some of last week’s defensive success (six sacks and six forced fumbles) to keep their offense in the game. Not only does the defensive line have to limit the run, but it will have to keep Sinagra uncomfortable in the pocket with a variety of stunts and blitzes.

Similarly to the defense, the offense has somewhat regressed, scoring 10 fewer points per game than last season. Don’t read too much into that though; so far, UBC has faced some pretty stout defense. Mix that in with some early season rust and that stat won’t look too pretty. What is concerning, however, is the lack of aggressive downhill play.

Back in early September, the last time these two teams met, UBC was outgunned from the get-go. Down 8-0, there was a series early in the first quarter where the ’Birds were pinned inside their own 10-yard line and decided to run the ball twice. They didn’t get the first down and ended up taking a safety as opposed to granting the Dinos good field position through a punt. They proceeded to lose the game 57-7. Choosing to run when backed up near your goal line is tempting because it’s the safest strategy there is, but you’re not going to beat the best team in Canada West without risk. UBC has to trust its best player, Michael O’Connor, and pass to run. When there’s an absence in aggressive play calling, your offense become predictable, leading to problems keeping the opposing defense honest.

One thing all championship-winning teams have in common is the ability to play by the rules (unless you’re the New England Patriots... wait, is that joke still funny?). Good discipline is priceless: it saves you points, yardage, distraction and perhaps your season. Last week, UBC lost to Regina by a field goal in the dying seconds of play – one that was awarded after they got flagged for roughing the kicker on a missed attempt seconds earlier.

Currently, the ’Birds average 12 penalties per game for 89 yards, good for ranking 5 out of 6 teams (or second-worst in the league). Calgary, on the other hand, is the worst disciplined team in Canada West, which in one way is a good thing – hey, they’re worse than us – but in another way a bad – how can they be penalized so much, yet still dominate? Either way, playing an honest game will only benefit UBC in what is sure to be a heated showdown between these two rivals.

So there you have it, our rundown of what UBC should be looking to do on Saturday if they plan to win their Homecoming game. Go forth and sound smart in front of all your friends at the game, and teach them why 3-4 cover 3 is poor against the run. Cheers!