Responsibilities of the ‘C’: For hockey captain Jerret Smith, his whole team is made up of leaders 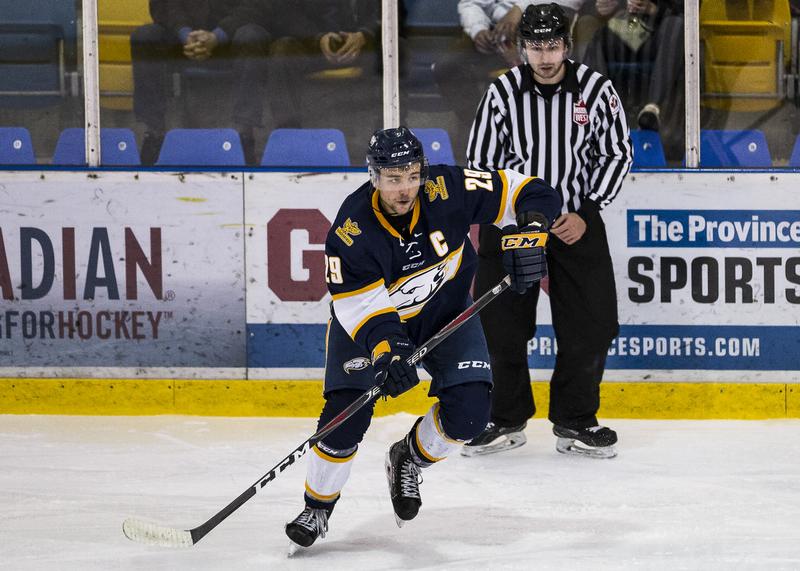 In the dying seconds of overtime, with the puck in the corner and UBC on the penalty kill, defenseman Jerret Smith shows why he wears the “C” for the Thunderbirds.

Although he could have tried to clear the puck, Smith instead lays on top of the puck and takes a beating from the frustrated Alberta forwards as they try, without success, to dig the puck free.

It was not the easy play — but it was the right play.

“That is why he is the captain,” head coach Sven Butchenson said. “It is tough to do anything there besides eat it. So he recognizes the situation and puts his body on the line there and buys us a few more seconds.”

While the Thunderbirds would go on to lose the game, there was no doubting the character of their captain who believes his teammates “are all leaders.”

One reason for this selfless attitude could be the man who first got Smith into hockey.

“I think it was my dad. Ever since I was younger, he was always a big hockey fan and I remember when I was five or six, he got me going right away,” he said. “... He’s a big inspiration for me.”

Like many other youth hockey players in the Lower Mainland, Smith was also a big Canucks fan growing up and looked to defenseman Ed Jovanovski and Canucks captain Markus Naslund as role models.

His own hockey career would take him south of the border, though, as a member of the Seattle Thunderbirds. On that team, he played with future NHL players like Matthew Barzal and Shea Theodore. He played there for four years.

“It was a great time,” he said. “[I] played with a lot of great players down there and the fan base was amazing.”

After his stint in Seattle, Smith decided to return to BC for school while remaining apart of a Thunderbird hockey team.

When describing the biggest challenge he faced in the transition from WHL to U Sports, Smith pointed to the experience of the players as a big adjustment.

“Everyone here in this league is a lot older and a lot stronger.... It’s a big stepping stone to get into this league because everyone can throw you off the puck right away.”

This year is the third season that Smith has worn the UBC Thunderbird logo. Most importantly, it’s one that has proved fruitful for the defenseman.

In addition to being named captain, Smith was also named to the U Sports All-Star team that played the Canadian World Juniors in a December exhibition series.

“It was [a] cool experience. Some of the guys I played [in Seattle] — they were younger than us, but their speed and talent was just unbelievable,” he said.

The decision came after a stellar four-goal game for the Thunderbird veteran just weeks prior. But, at this point, you probably can guess what he says when describing this impressive individual performance.

“It wasn’t just me, it was just the guys starting to play well and it was getting good bounces out there,” he explained. “They’re all making great plays and I just happened to be the guy that ended up putting it in the back of the net.”

While many others would have bragged about their achievements, it’s clear that Smith is different. His achievements are that of the team too — a mark of a true leader.