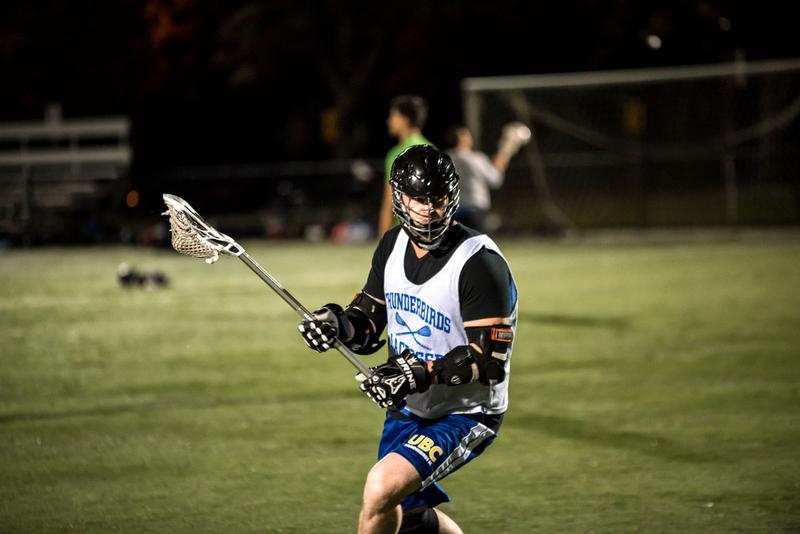 UBC has another provincial winning team, but it isn’t currently varsity even as Canada’s national sport. The UBC Thunderbirds Lacrosse Sports Club took first place at last weekend’s BC Men’s Provincial Lacrosse Tier II Championship after a 10-9 win over the University of Victoria Axmen.

Having joined the Canada West Field Lacrosse League two years ago, the team has a seen an upturn in team commitment, spurring a lucrative 2015/2016 season and seeing them to a gold medal this past weekend.

According to Mitchell Kitt, team president, the team has felt much more official since their 2014 league switch.

“We have gym training sessions now. We practice twice a week. We have a game. Lacrosse is actually a part of our life that we have to fit into our schedules, compared to just twice a week going to throw the ball around,” Kitt said. “This kind of competitiveness and drive has really made us more of a team, this year especially.”

Currently, the men’s lacrosse team sits as a Thunderbirds Sports Club and are therefore recognized as student athletes, but the team hopes to work their way up to varsity in the near future. This could mean, as explained by co-captain Robert Craighead, either starting up a collegiate league in Western Canada or joining the Western American League.

In hopes of furthering the varsity dream, the boys will play host to the Univeristy of Victoria this weekend for their first ever home game.

“Playing UVic is huge for us in the sense of helping Western Canada collegiate lacrosse grow,” Kitt said. “Giving us all ... something to work for rather than playing in other leagues and not playing college teams.”

“We’ve never been able to play on home turf or even had the option for people to come see us,” Craighead continued. “I know UBC isn’t huge on coming to sporting events ... but at least, for us, it’s like we’ve never gotten to play another college team with this kind of commitment, competitiveness [or] organization.”

“We want people to see that UBC has a lacrosse team and that it’s actually quite a fun sport to watch,” Kitt said.

When asked why they think students should come out and support them, Kitt said, “It’s a sport that I see growing at UBC to eventually a level where everyone knows. People might be applying to UBC to play lacrosse. In the East, it’s a huge sport. People know about it and I think us growing is the first step to people seeing what lacrosse is, people finding out how it’s played and that it does exist here.”

“It is [also] Canada’s national sport. If you are Canadian or an international student who wants to be a bit more Canadian, come check it out,” Kitt continued. “Most people enjoy it too. It's a very fast paced, high scoring, full contact game. I think most people would enjoy watching that.”

The team plays at 2 p.m. on Saturday, March 19, at Harry Warren Field.