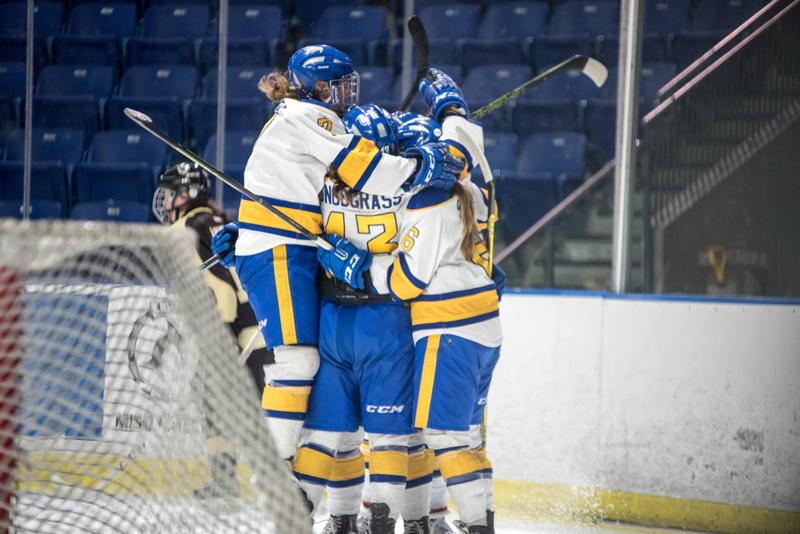 After winning the first game of the best-of-three series, the women’s hockey team had an opportunity to take home the Canada West championship against the University of Manitoba Bisons in game two on Saturday night.

Things looked promising from the get-go — just two minutes in, Kelly Murray got the icebreaker for the T-Birds via a wrist shot from the point. They put tremendous pressure on the Bisons’ defence throughout the period as Manitoba had trouble getting out of their own zone. UBC nearly doubled their lead halfway through the period through Mathea Fischer, but her wrist shot rang off the iron.

Manitoba came back strong in the middle frame and outshot the ’Birds in that period. With time running out in the second, the Bisons created a 2-on-1 play. Alana Sharman laid a beautiful pass across to Finnish Olympian Venla Hovi who made no mistake, beating the buzzer with a tying goal with just seven seconds on the clock.

The Thunderbirds came back storming early in the third period. Nicole Saxvik rushed the puck into the Bisons’ zone and made a terrific tape-to-tape pass to captain Stephanie Schaupmeyer who, with one hand on her stick, managed to deflect the puck in. The puck had clearly crossed the goal line before it was cleared by the Manitoba defence. Although the red light went on, the referee eventually ruled that the play was inconclusive and waved the goal off. Head coach Graham Thomas expressed his displeasure with the officials after the game.

“We know it was in,” said Thomas. “That’s a difference maker there. We got all the momentum, the crowd, everybody behind us when we scored that goal. We have a picture of it zoomed in — it’s across the line. [The officials] never even talked to the goal judge.”

The momentum swung Manitoba’s way after the disallowed goal. At 7:14, Erica Rieder scored the go-ahead goal, which was followed by an Erin Kucheravy goal a minute later to put the Bisons up 3-1. Looking to solidify the victory, Venla Hovi hit the empty net with 3:02 remaining. With the 4-1 victory, Manitoba forced a winner-take-all game three.