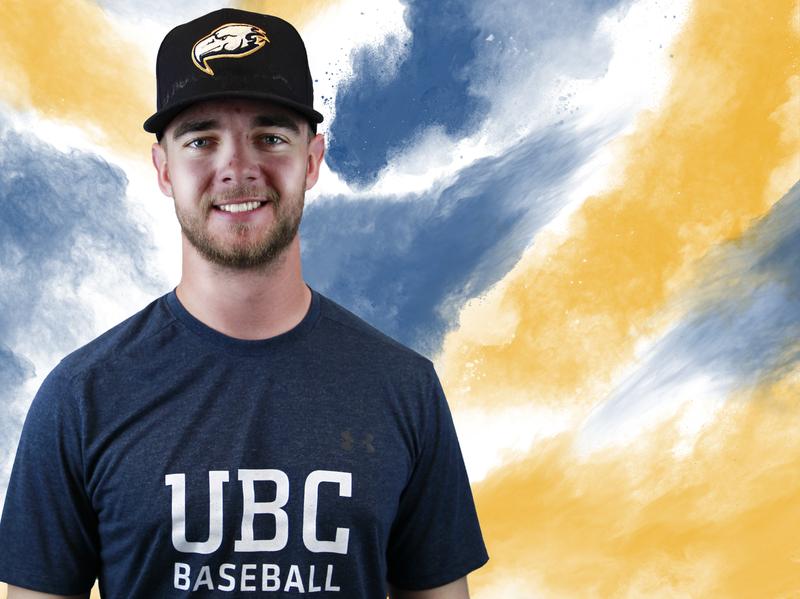 "I want to keep riding this wave as long as I can.” Elizabeth Wang/Ryan Neale

Jaxon Valcke is in his sophomore season with the UBC Thunderbirds baseball team. Just one year removed from being a rookie that broke into the starting lineup, the infielder/outfielder already finds himself a veteran face among a young crew and a core centrepiece of the team’s batting order.

The product of St. Mary’s, Ontario had a stellar rookie season with the ’Birds. As a regular starter, he batted 0.245 and was in the top five on the team in hits, runs batted in (RBIs) and total bases.

In his return to the field this year, however, Valcke’s play is noticeably different. With a year of experience behind him, he finds himself more comfortable in his approach to the game.

“I think it’s just … the confidence that I’ve had this year. Last year, my first year, I just kind of dipped my toes in the water — didn’t know what to expect with my first year of college baseball,” Valcke said. “This year, I really knew what I was getting myself into, so … there’s kind of a new mindset when I’m in the box. Just me being better than the other guy — just trying to do my best.”

Valcke’s new-look game extends beyond the plate, too. This year’s campaign comes following a whirlwind of an offseason that saw the departure of nearly a third of UBC's roster.

“It’s been a pretty interesting year, just because we had so many young guys,” said Valcke of their strong play so far this season. “I think we just did a really good job of getting integrated into our culture, and buying into our process and what we believe in.”

Although he has played a pivotal role on the field, Valcke doesn’t see himself as a standout in the locker room.

“There’s no one guy, we’re all buying in together, I think, and it’s just working for us,” he said of the team’s leadership style. “I don’t really believe in leading by example — I think that’s just kind of doing your job. Maybe if guys see me doing it my way, that’ll help.”

Despite the huge roster turnover, Valcke and the Thunderbirds find themselves on a nine-game win-streak, and they entered their bye-week atop the Cascade Collegiate Conference (CCC) standings.

For Valcke, much of their success in the early-goings of the year can be attributed to the players that were leaders to him last season.

“Every time we talk about the culture that we have now, it’s because of the leadership that we’ve had in the past. This is a very different team than the past couple of years,” he said. “Without having those guys instill our work ethic into the older guys now, I don’t think we’d be able to get these new guys to buy into that.”

Though Valcke remains ever-humble, there is no denying that he has been a powerhouse to start his National Association of Intercollegiate Athletics (NAIA) West season. He has put up otherworldly numbers in the month of March, slashing .389/.741/.404 and leading UBC with 21 hits, 7 doubles, 4 home runs and 16 RBIs.

From the start of the season, he leads the CCC in slugging percentage and home runs and is top five in doubles, RBIs and total bases.

“It’s hard to put a finger on it, really. Baseball’s such a weird game, I guess,” Valcke said of his recent play. “I just know that it feels good, and I want to keep riding this wave as long as I can.”

Behind the powerful bat, Valcke has been an every-man for the ’Birds, finding himself penciled in across the infield, the outfield and in the designated hitter spot. But for him, there is comfort in the chaos.

“If you hit, you’ll find your way into the lineup,” Valcke said. “I get why it might not work for everyone, but I kind of like bouncing around.

“Being wherever helps the team most is fine for me.”

Out of the mid-season break, Valcke will look to lead this UBC squad through a strong second half to their year. Following a season that saw the Thunderbirds achieve a NAIA Baseball Championship berth, the memories of playoff play on a national stage are still fresh in the minds of the team’s veterans, with hopes of taking their young core on another deep run.

But for now, Valcke is focused on staying the course.

“I really appreciate it, I think it’s pretty cool, but we are only halfway through, so there’s a lot of season left,” he said of his Athlete of the Month selection. “Hopefully we can also stay in this for the rest of the year and go on and do something cool in the playoffs.”