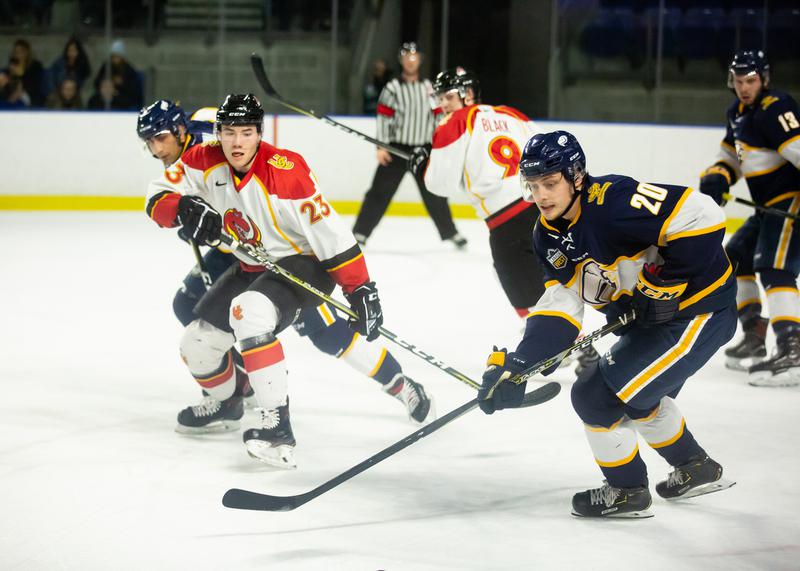 UBC put the bow on top of a very solid 8-2 victory over SFU. File Isabella Falsetti

Scott Atkinson would round out the scoring as UBC put the bow on top of a very solid 8-2 victory over SFU. It was a good game for the Thunderbirds, taking their first Captain’s Cup game and starting their preseason off on the right foot.

After a 533 day hiatus, the UBC men’s hockey team returned to action against their historical foes SFU in the Captain’s Cup.

While there were no spectators in Doug Mitchell Thunderbird Arena, the sights and sounds of hockey being played were sorely missed.

With both teams lacking game experience, it was understandably a little chippy as the puck dropped. However, UBC was the first to find their legs as they dominated play early on.

The Thunderbirds found themselves with the most offensive zone time, severely outshooting their cross-town rivals early.

It was SFU that was able to get on the board first though. A turnover at the blueline gave Jacob Lacasse a short breakaway, putting it past Rylan Toth for the first goal of the game. Against the flow of the game, it was the visitors that struck first.

However, mere seconds later as they entered the final five minutes of the period, UBC equalized. Jake Kryski found the back of the net off of an Auston Glover rebound, sliding it past Cale Dolan to even the game up at one.

The first period ended with back and forth rushes at both ends of the ice, the game really opening up after the first two goals.

The second, however, was a much more different story. The UBC head coach Sven Butenschön must have really given his players a talking to in the dressing room as they came out flying to start the period. They controlled the play from top to bottom, hemming SFU in their own zone during their alleged power plays while throwing more shots on net.

Three minutes in, and from a beautiful set up on the power play Tyler Sandu potted one in, giving the T-Bird their first lead of the night, surprisingly. The goal sparked more energy as the T-Birds began shaking off the rust, looking very good for a team that hadn’t played in nearly two years.

Further goals from Glover, Conner McDonald and Michael Clarke finished off the four-goal explosion by UBC in the frame as they headed into the third with a 5-1 lead. The game’s physicality picked up as well, with a lot of extracurriculars happening after each whistle. Perhaps the old spark in the rivalry was being rekindled, too.

With the game looking out of reach heading into the third, SFU managed to pull within three thanks to a beautiful tic-tac-toe play on the man advantage. Mateo Coltellaro absolutely roofed it past Ethan Anders, who had no chance of stopping that puck.

However, that would be all she wrote in terms of the visitors scoring. UBC began to heavily outskate and outplay their opposition, and by the last five minutes, SFU hung their heads in defeat. Carson Miller would score twice in the span, including this beauty on the backhand.

The final shots were 29-20 in favour of UBC, with 22 total penalty minutes between both teams. Miller earned a well-deserved first-star thanks to his two goals and one assist, with Sandhu and Kryski rounding out the other selections.

The Thunderbirds return to the ice on September 25th, when they take on the newcomers to Canada West in the Trinity Western Spartans at home.