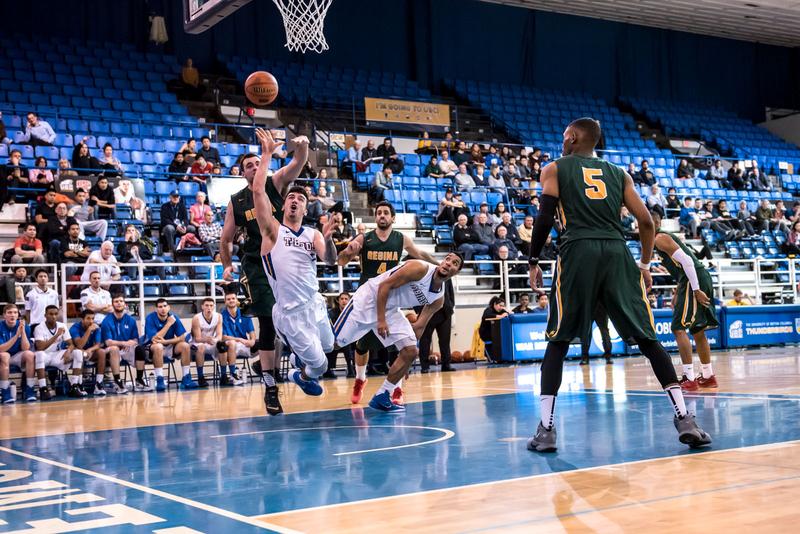 In the same year as UBC’s Centennial celebration and for the first time in 44 years, the UBC men's basketball team will host the CIS Final 8 on a new wooden court at the Doug Mitchell Thunderbird Sports Centre.

To put it into perspective, the last time the championships were hosted on the Point Grey campus was 28 years before current head coach Kevin Hanson — who has since won five Canada West titles — took the reins at the team. The last time UBC hosted the event, a general admission ticket to the finals was $1.50 (they now start at $10) and the women’s team was still known as the “Thunderettes.”

The Thunderbirds hosted the Final 8 tournament — then known as the CIAU Championship Final — in March 1972 for the first and only time. Seizing an opportunity, the team proceeded to defeat the Acadia University Axemen with a score of 87-80. This was perhaps the Thunderbird’s grandest era as the women’s team was also in the midst of a three-title winning streak. Unfortunately for the ’Birds, it was also the last time the men’s team hoisted the trophy.

But that could all change this year. The Thunderbirds are looking strong this season. Despite losing Tommy Nixon, who scored a career-high of 45 points in a game against the Trinity Western this time last year, and the team losing half of their scoring offence from last season to graduation, this year’s team already looks to be faring better than their 2014-2015 counterpart.

The team has a conference record of 10-4 as opposed to last year’s at 8-5. The ’Birds are currently second in the Pioneer Division of Canada West and are obviously good enough to contend with the dominant teams in Canada. It is not too wild of an idea to see them wreak havoc in the nationals this year. This might perhaps the ’Birds’ best chance at taking the title.

The T-Birds have the formula down this year. Thunderbird veterans — like third-year Conor Morgan, fourth-year guard Jordan Jensen-Whyte and six-foot-nine forward David Wagner — are totalling 16.3, 14.5 and 11.4 points per game, respectively.

Interestingly, there is also an influx of extremely good players into the team, especially from other schools. Port Coquitlam native Patrick Simon, who scored 17 points in UBC’s win on Friday against Regina, is a transfer from Simon Fraser University. Guard A. J. Holloway has repeatedly injected energy into every game he has played in, constantly making steals as well as assists. He is from across the border, a transfer from Bellevue Community College in Washington.

Will Ondrik, who played for the Thompson Rivers University Wolfpack, is averaging eight points and Phil Jalalpour, transfer from Olds College in Alberta and their player of the year from last season, is averaging 9.3 points per game. These players are all relatively new additions to the team, but have each managed to adapt quickly and continue to get on the board with amazing play.

Winning this year could change everything for the ’Birds. There is something about winning the CIS Basketball Men’s Championships that seems to encourage back-to-back title wins as though winning once opens the floodgates. This phenomenon is highlighted when looking at teams like the University of Victoria Vikes who went on a seven-title winning streak between 1979 and 1986, and the University of Carleton Ravens, which have gone on five-title winning streaks twice including a win just last year.

Not only will winning put the Thunderbirds on the path to asserting dominance in the Canada, but it will also place them as one of greatest teams in UBC’s history.