While UBC finished without a national medal, the Carleton Ravens are back on top of the U Sports basketball world 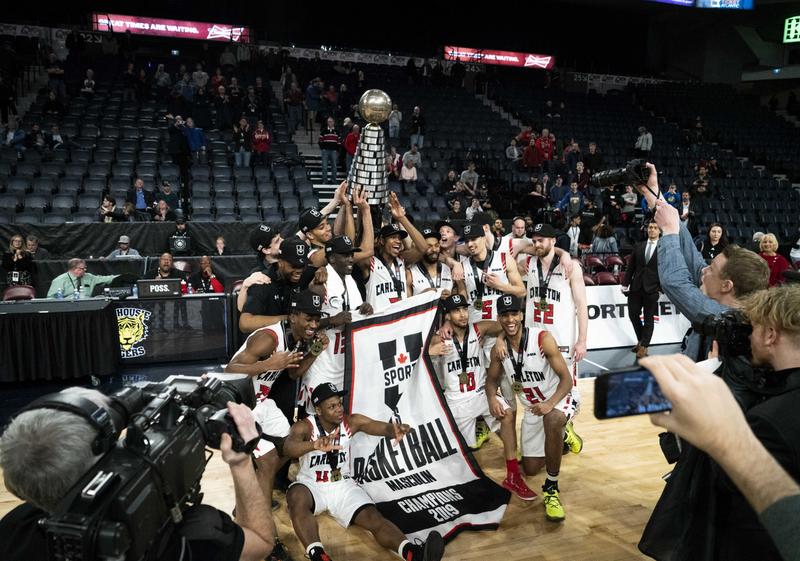 The Carleton Ravens are national men’s basketball champions once more.

It took just 40 minutes of gameplay for the Ravens to strip their crown back from the reigning champion Calgary Dinos — but for a Dinos team that was dominated from tip-off to buzzer, it was a nightmare with seemingly no end. The Ravens would hold Canada West’s best to their lowest point total of the season by a 20-point margin, downing Calgary 83-49.

Right from the get-go, Carleton simply had Calgary outmatched. The game opened with a 9-0 run, and the Ravens wouldn’t look back from there.

Though Carleton — a perennial contender — was vying for their 14th W.P. McGee Trophy, they played with an edge that head coach Dave Smart credited to their semifinal matchup against the tournament host Dalhousie Tigers.

“Some would say last night we weren’t our best, but that’s a good team in a tough environment,” Smart said of their 76-75 victory over the Tigers on Saturday. “In a weird way, it made our entire team feel that we were the underdog today.

“I think if we [had] won by a large margin last night, they wouldn’t have been able to convince themselves they were the underdog. They played like the underdog tonight, in terms of they played with a fire, in attack mode.”

Carleton shot 40 per cent from the floor on Sunday, and 10-30 from three-point range in a relentless attack that overwhelmed and significantly outpaced Calgary all night long. Though the lead was kept to single digits by the end of the first quarter, the Ravens quickly stretched the lead to 21 with a strong second quarter. The Dinos found themselves down 44-23 by the end of the half. 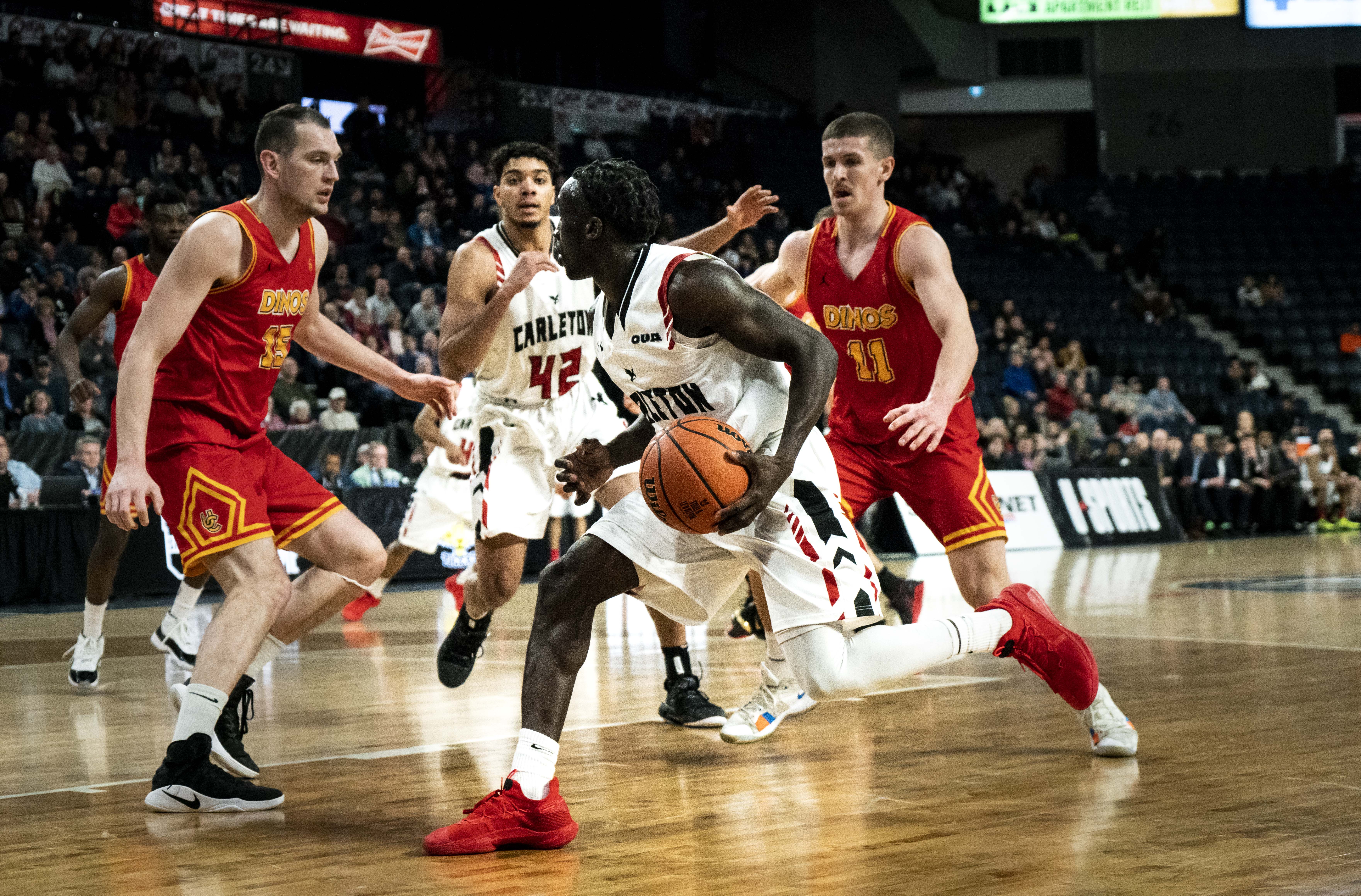 Calgary started strong into the second half. Graduating guard and Canada West MVP Mambi Diawara posted seven straight points to chip away at the Ravens’ stranglehold, taking advantage of a rare, few early-quarter misses by Carleton.

But the Ravens grabbed momentum back with an 8-0 run of their own, and wouldn’t give up control again for the duration of the game.

“[We] stayed locked in offensively in terms of staying with our plan, and got guys the shots we needed to get them,” said Smart. “We had a little bad spurt at the start of the third quarter where we didn’t necessarily execute too well, but other than that I think we executed well most of the night.”

Though the Ravens played a hungry, explosive and expertly executed offensive game, their real strength was on the other end of the floor.

Carleton’s disciplined and stringent defense suffocated the Dinos all night long. Calgary is a team that had found great scoring success throughout the Canada West season, averaging 88.5 points per game, but their all-star studded roster had no room to work throughout the night.

The Ravens’ defense was marshalled by third-year forward Eddie Ekiyor. The Ottawa hometown hero played a strong and complete game.

“I think he just dominated both ends of the floor, all three facets,” Smart said of Ekiyor’s play. “He’s hard to cover, he dominated at the defensive end and he was a beast on the boards.”

Ekiyor was matched up against a tough opponent in Dinos forward Brett Layton, a Canada West second-team all-star. Though Layton pulled down 15 boards and nine on the offensive end, he couldn’t find the space and time to score as effectively as he’s used to.

Ekiyor’s disruptive efforts held Layton to just 5-13 shooting — a remarkable feat against a player who normally finishes well inside, and shoots near 60 per cent. By the end of the matchup, it was clear that fatigue was affecting Layton’s game. 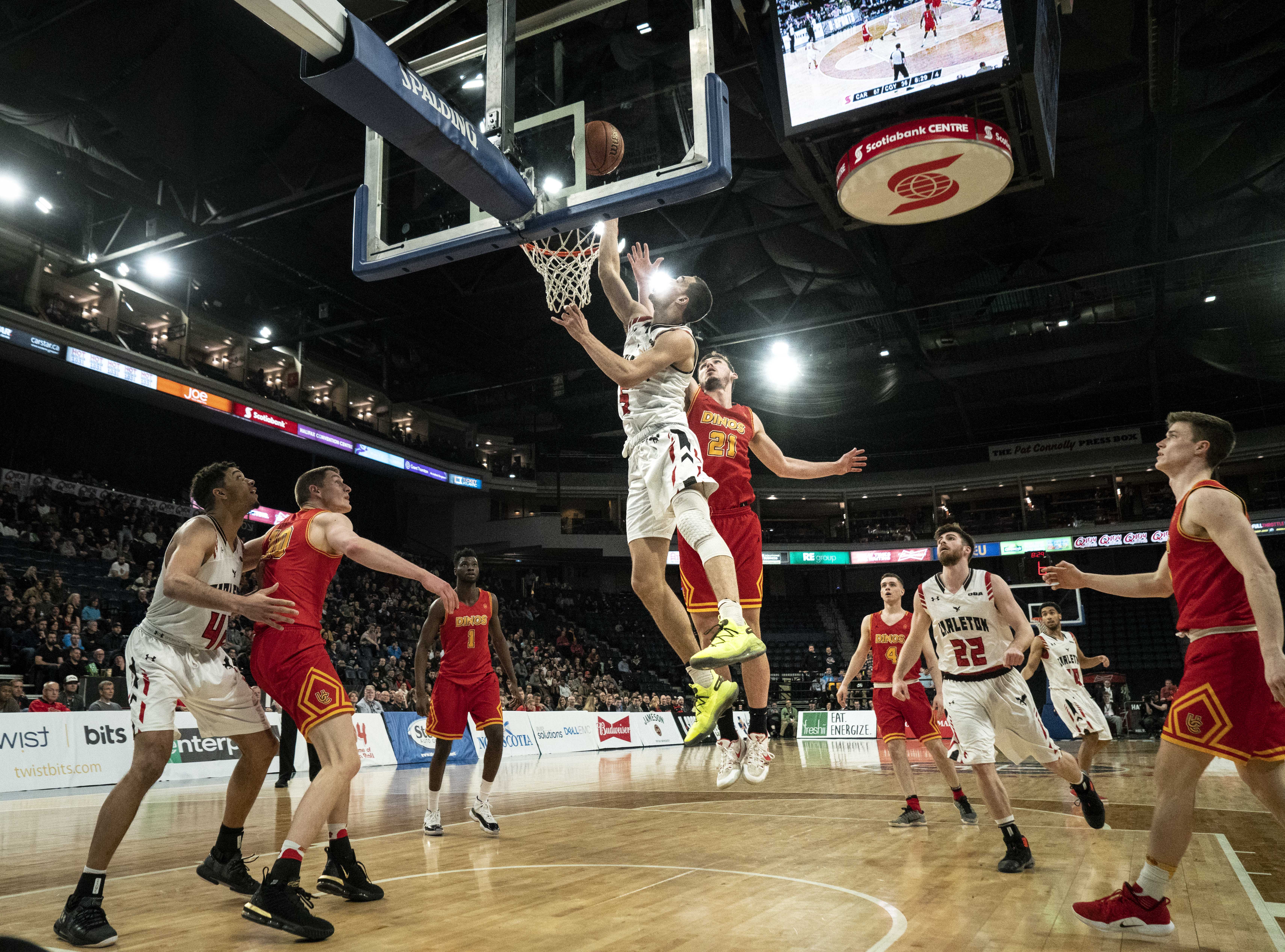 “Three games in three days is going to wear you out,” Smart said of Layton, following the game. “He’s a great player, and he had a great season … Having Eddie as your matchup in this environment is tough … As great a player as he is, it’s a tough matchup.”

Layton would become just one on a list of powerful big-men that Ekiyor handled throughout the Final 8 tournament — a list that included Brody Clarke, arguably Canada West’s top forward who averaged a double-double for the Alberta Golden Bears. Ekiyor’s efforts earned him both player of the game honours for the final and tournament MVP.

The Ravens also stacked up well against the normally dangerous seniors of Calgary, Diawara and fellow first-team Canada West all-star David Kapinga. Kapinga had a particularly difficult outing, shooting just 1-13 in his final game in a Dinos uniform and seeing only five minutes of floor-time in the second half.

The veteran guard faced a difficult matchup in the Ravens’ Munis Tutu, Ekiyor’s closest competition for player of the game recognition. Tutu posted a monstrous stat-line — 18 points, 2 blocks, 3 assists, 4 steals and 6 rebounds in 33 minutes. The guard is playing just his second year with Carleton but was a standout leader on the floor throughout the tournament.

The U Sports basketball crown now, once again, comfortably belongs to the Ravens — and the beating they placed on a very strong Dinos team has put the rest of the country on watch. It will be a daunting task for seven teams as they, this time next year, head to Ottawa looking to usurp the throne of Smart and his dynasty.