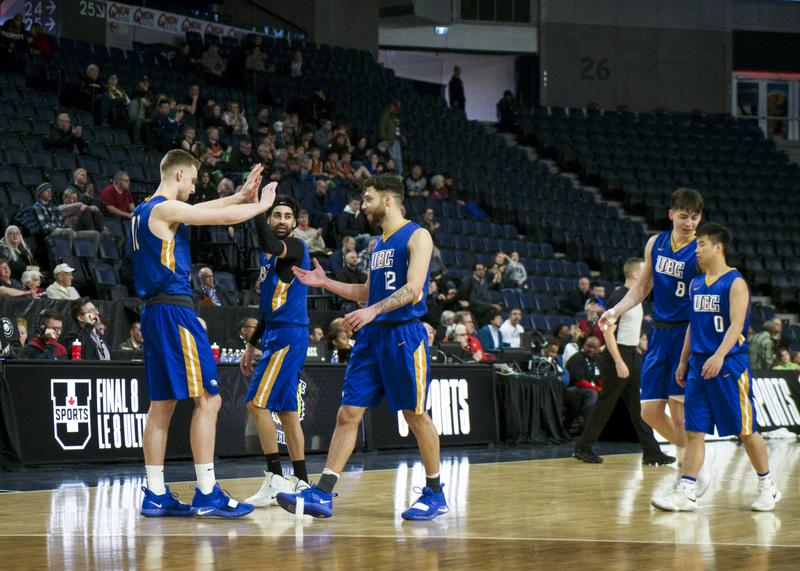 The young, scrappy and hungry UBC Thunderbirds men’s basketball team finished their exciting season with a victory. In a shootout affair, the ’Birds held on to defeat Halifax hometown squad the Saint Mary’s University (SMU) Huskies 95-86 — securing the fifth overall spot at the U Sports Final 8 national championship this year.

Following a late night that saw UBC knock off the Canada West rival Alberta Golden Bears, they returned to action in the first slot on championship Sunday — the final for the consolation side of the bracket. They faced an SMU team that received a full day of rest following their resounding 84-67 victory over the Concordia Stingers.

Despite the quick turnaround and a consistent struggle with starting slow throughout the tournament so far, the team came out strong. After looking not quite like themselves for much of the first two games, it seemed that UBC had returned to the form of a team that dominated opponents across the Canada West conference throughout the regular season.

Following the game, UBC head coach Kevin Hanson attributed their strong start to a more relaxed team that didn’t let the moment get to them.

“Obviously, tonight, the guys played really loose and they enjoyed playing basketball today,” he noted. “That’s the sense you’ve got to have, that first game, being relaxed … and enjoying yourselves, enjoying that moment.”

Throughout the first quarter, the Thunderbirds shared the ball and hit their shots. Each of the starters hit at least one field goal, led for the third straight game by stellar play from sophomore sensations Grant Shephard and Mason Bourcier. Shephard was a perfect 4-4 in the opening 10 minutes, picking up nine points, while Bourcier added seven of his own to go along with five assists.

SMU, however, made a strong offensive push of their own. The Huskies shot 4-7 from long-range and took advantage of five UBC turnovers to keep pace through the opening frame, one that was unremarkable on the defensive front. 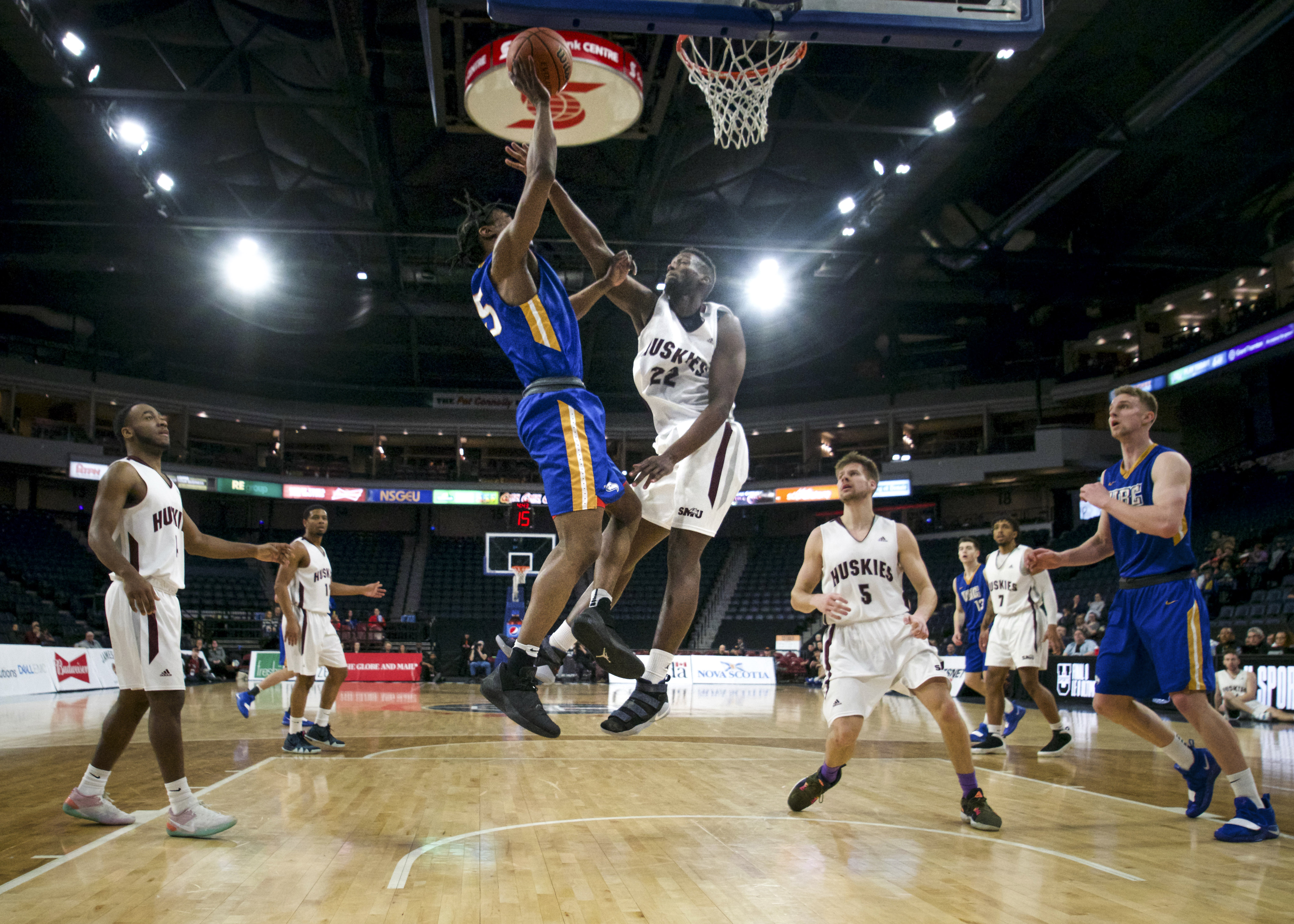 After two games that saw the Thunderbirds held to just 65 and 72 points — well below their 93.5 average — their 30-point first quarter on Sunday was a welcomed start, though they led by just a single point.

The second quarter continued to be shootout, but the Huskies’ perimeter shooting was better kept in check.

SMU shot 0-6 from three-point range but found some success closer to the basket. Sophomore guard Nikita Kasongo set the pace for the Huskies with a strong, seven-point quarter, adding to the twelve he posted in the opening period.

Down the stretch of the quarter, UBC three-point specialist Manroop Clair hit from outside to put the ’Birds up four and a Bourcier-made free-throw helped close out the half with UBC up 51-46.

To start the third, Bourcier and Shephard continued to drive the offense for the T-Birds, putting up nine and seven points in the quarter respectively. But continued turnover troubles left the door open for Kasongo and a strong Huskies bench to cut into UBC’s lead. By the midway point of the frame, SMU hit from outside to recapture the lead, and a fast-break dunk from Kasongo punctuated a 7-0 scoring run that put the Huskies up 63-60.

Just as SMU started to build some momentum, an awkward screen set by Shephard sent Kasongo off limping — and with the hot hand of the Huskies on the bench, UBC recaptured the flow of the game and closed out the quarter up five.

Despite a strong SMU push in the final frame, Jadon Cohee took over the game for the Thunderbirds. Scoring off both drives into the paint and long shots on the perimeter, the veteran demonstrated great poise under pressure, putting up a quarter-best nine points. Cohee’s efforts and a strong stretch of defensive rebounding helped UBC seal the victory by a 95-86 margin.

“The way I looked at [this game] — I had a different feel — we come out and have fun,” Bourcier said of their play following the game. His tremendous play on both ends of the floor earned him player of the game honours for the Thunderbirds. 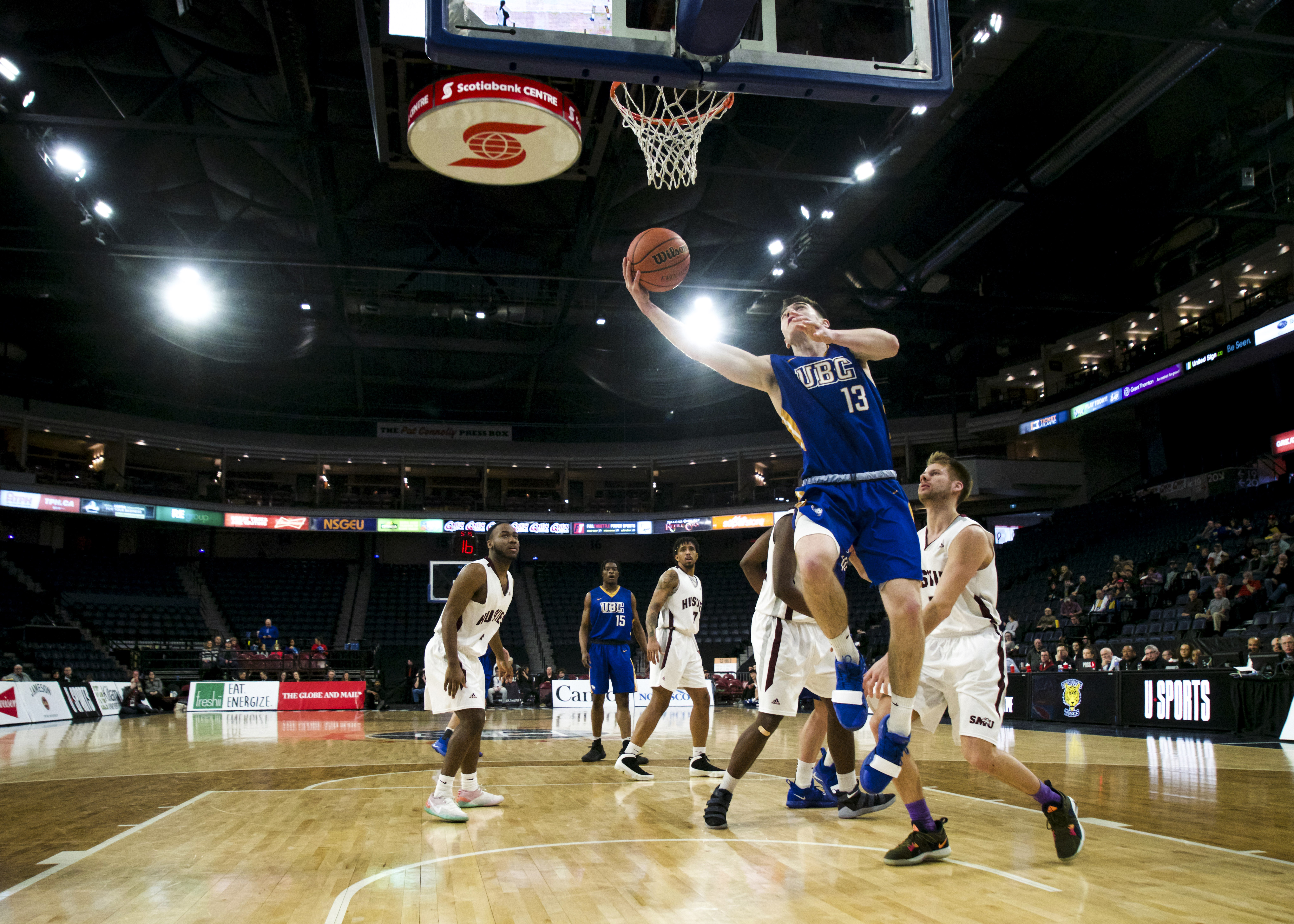 “It’s our last game of the year, some guys are leaving. … We always play to win but this one we definitely had more of a relaxed, have-fun kinda feel.”

For the first time in this tournament, the Thunderbirds were able to get their entire starting rotation involved in scoring. As has been clear all year, when their best players are on top of their game, this squad is tough to beat. UBC just hadn’t looked the same up to this point in the Final 8 without everyone engaged on the offensive side of the ball.

Following the game, Hanson commended the efforts of his young team. The sophomore core of their starting lineup was essential in driving the offense throughout the game and leading the charge for the Thunderbirds throughout the duration of the tournament.

“I was really impressed with Mason Bourcier and Grant Shephard, again — two young guys that are really the future of our program,” Hanson said. “To give them the minutes, and to see them out there having fun, and playing a third game — that is a tough, tough game to play.”

Though UBC didn’t have a medal at stake in their final outing of the season, the game continued to be a great learning experience for the group.

“It’s very important, in particular, for our young guys to get a third game in an arena-style, at a national championship,” said Hanson. “You can’t put a price tag on being in this tournament.”

For the Thunderbirds, a consolation final victory and a fifth-place rank in the nation is just an added bonus.

“Winning the last game of the year is a whole lot nicer than to lose it,” Hanson said.