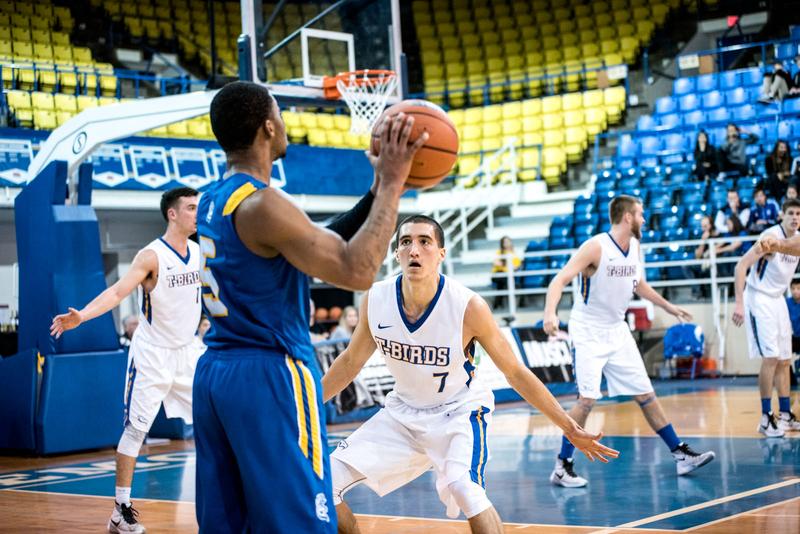 On Friday evening, men’s basketball defeated the visiting Seattle Mountaineers 87-66 in a dominant fashion at home in the War Memorial Gym.

Even though the Mountaineers had won their previous two games, the T-Birds proved to be too tough of a match-up for them to handle. Whenever the Mountaineers showed some resilience, the T-Birds would answer by getting consecutive baskets — widening the lead which was 24 points at one point in the fourth quarter.

The second quarter began well for the ’Birds once more. In the eighth minute, UBC was leading by nine points. However, in the span of three minutes, the Mountaineers narrowed the lead from nine points to three, almost catching up. All of a sudden, the ’Birds woke up and scored consecutive baskets to finish the first half 35-29.

It was much of the same story in the third quarter. Both teams were going back and forth, exchanging points. But throughout the night, one could tell that UBC was the better team out there. They ended the third quarter at 60-51, leading by nine.

The fourth quarter saw the Mountaineers, for the first time in this match, score before the T-Birds at the start of a quarter. Unfortunately, the Mountaineers could not capitalize on this optimistic start and instead gave up soon after. This was because of fourth-year forward Conor Morgan’s back-to-back ferocious dunks — which got the whole crowd to its feet — and because UBC’s lead was too much for the Mountaineers to catch up to.

The T-Birds did have more points in the paint though. Nonetheless, despite the Mountaineers putting up some good statistics, it just wasn’t their night — nothing seemed to be going well for them.

Morgan was one of the star performers of the game, who shot 10-17 from the field and grabbed eleven rebounds. Another great performer was fourth-year guard AJ Holloway, who played his heart out and always fully committed on defence. He showed a lot of emotion and was furious with himself when he missed a free throw or an opportunity for a steal. It’s always great seeing such genuine passion, emotion and love for the game.

Yet another performer was fourth-year guard Phil Jalalpoor, who carried out some wonderful plays with flair. Rookie Isaiah Familia looked like a good addition to the roster who provided some great shooting from the three off of the bench, knocking down two of his three attempts. He was a great spark to the team.

It was a wonderful team performance from coach Hanson and his boys, who ran the Mountaineers out of the War Memorial Gym in a very dominant manner.

The ’Birds will play against the University of Lethbridge Pronghorns on Friday, October 14 and Sunday, October 16 at their home in the War Memorial Gym.