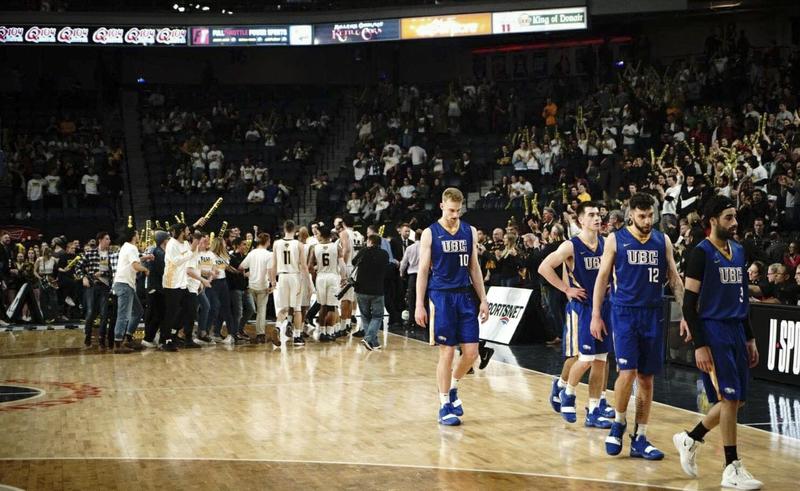 Dalhousie celebrates their continuation towards the national final while UBC wonders what went wrong. Mitchell Ballachay

After making the trip across the country to Halifax for the Final 8, the UBC Thunderbirds men’s basketball team dropped a heartbreaking opening round game to the Dalhousie Tigers 74-65 — ending their run at the 2019 U Sports national title.

In their first round of tournament play, the Thunderbirds caught a tough break in their seeding, as they went in ranked fourth overall. Although a Canada West silver medal allowed the ’Birds to avoid an early matchup with the consensus nation’s-best Carleton Ravens, they faced a very different kind of challenge in the fifth-seeded Dalhousie team.

Dalhousie, as a school based in the host city, had the entire stadium on their side. From the get-go it never felt like UBC was playing 5-on-5 basketball — the Tigers were 3,800+ strong on the sidelines.

Whether it was the pressure of the hostile crowd or the gravity of playing on a national stage, the Thunderbirds did not come out of the gate playing like their regular selves. Through the first quarter, they shot just 4-16 and were 0-6 from three-point range.

“Obviously we didn’t shoot the ball very well,” UBC head coach Kevin Hanson said following the game. “Partly because of their defense, what they did to us, and partly the ball just didn’t fall for us.” 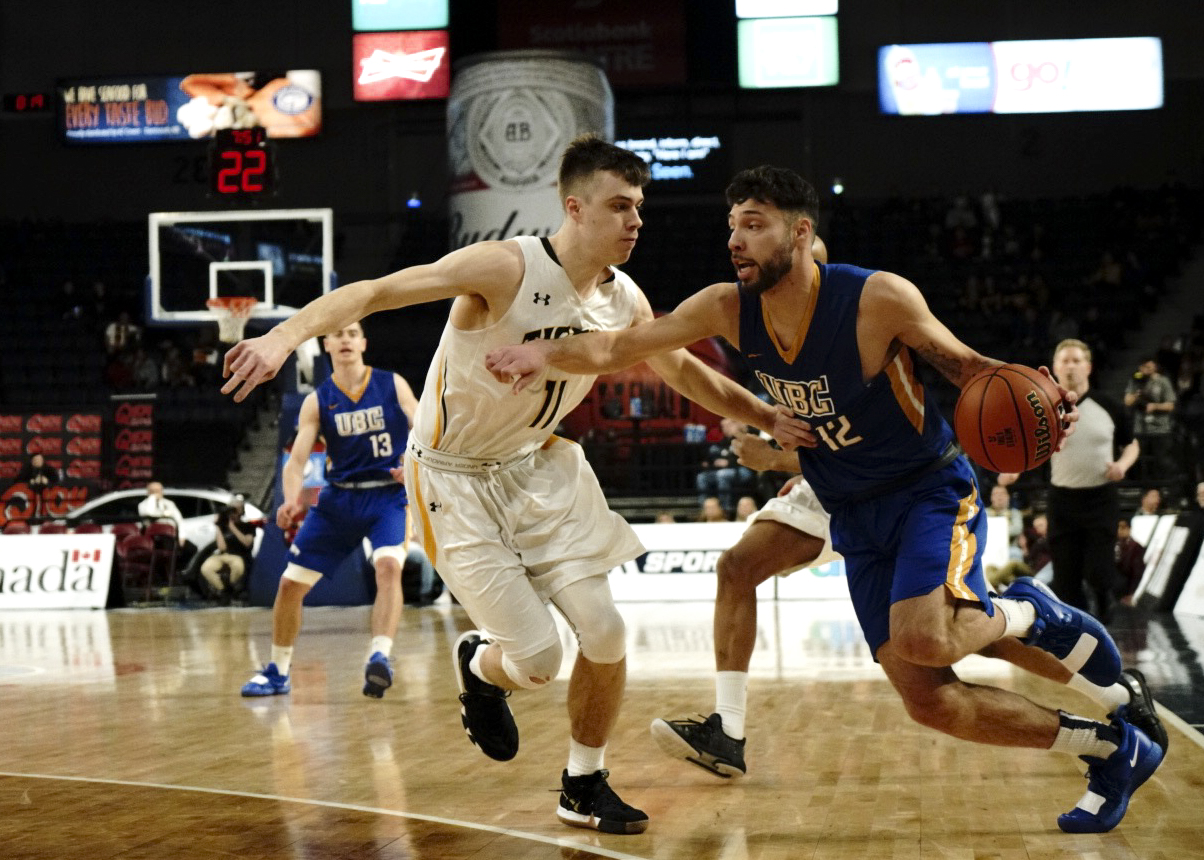 Though the Tigers fared little better through the first 10 minutes, shooting just 5-17, they were 2-8 from beyond the arc. With the crowd punctuating every bucket, their momentum built quickly.

By the end of the first half, the Tigers had pulled away to a 33-18 lead. Every time UBC looked like they might be able to build a consistent counter-attack, Dalhousie’s defense locked them down. UBC had posted just nine points in back-to-back quarters — the first time they had been held to consecutive, single-digit quarters all season.

“[Dalhousie head coach] Rick [Plato] does a great job of coaching against teams that make runs, and seems to slow it down real well,” Hanson said. “I think they did a good job of making us bounce it, our three-point shooters very seldom got a real clean look, [and] when they did they kind of rushed it.

“They did a good job of taking the best guys away.”

The struggle of UBC’s primary scoring was evident. Starring seniors Jadon Cohee and Manroop Clair were shooting just 1-15 collectively by the end of the first half and the offensive frustration of the team was evident.

“It sort of set us back,” Hanson said of their early offensive woes. “And then a couple of guys tried to be a little creative on their own — we lost sort of the team concept, started forcing some shots.”

“[The Tigers are] a very talented team. Very long and athletic, and they did a good job of taking some of our looks away…” he said. “We were trying to get a little too creative and got away from our game plan.”

The young forward was one of the lone highlights for the ’Birds in the upset. He put together a 24-point, 12-rebound double-double performance, earning him player of the game honours for the Thunderbird side. He and fellow sophomore Mason Bourcier accounted for 41 of the team’s 65 points on the night. 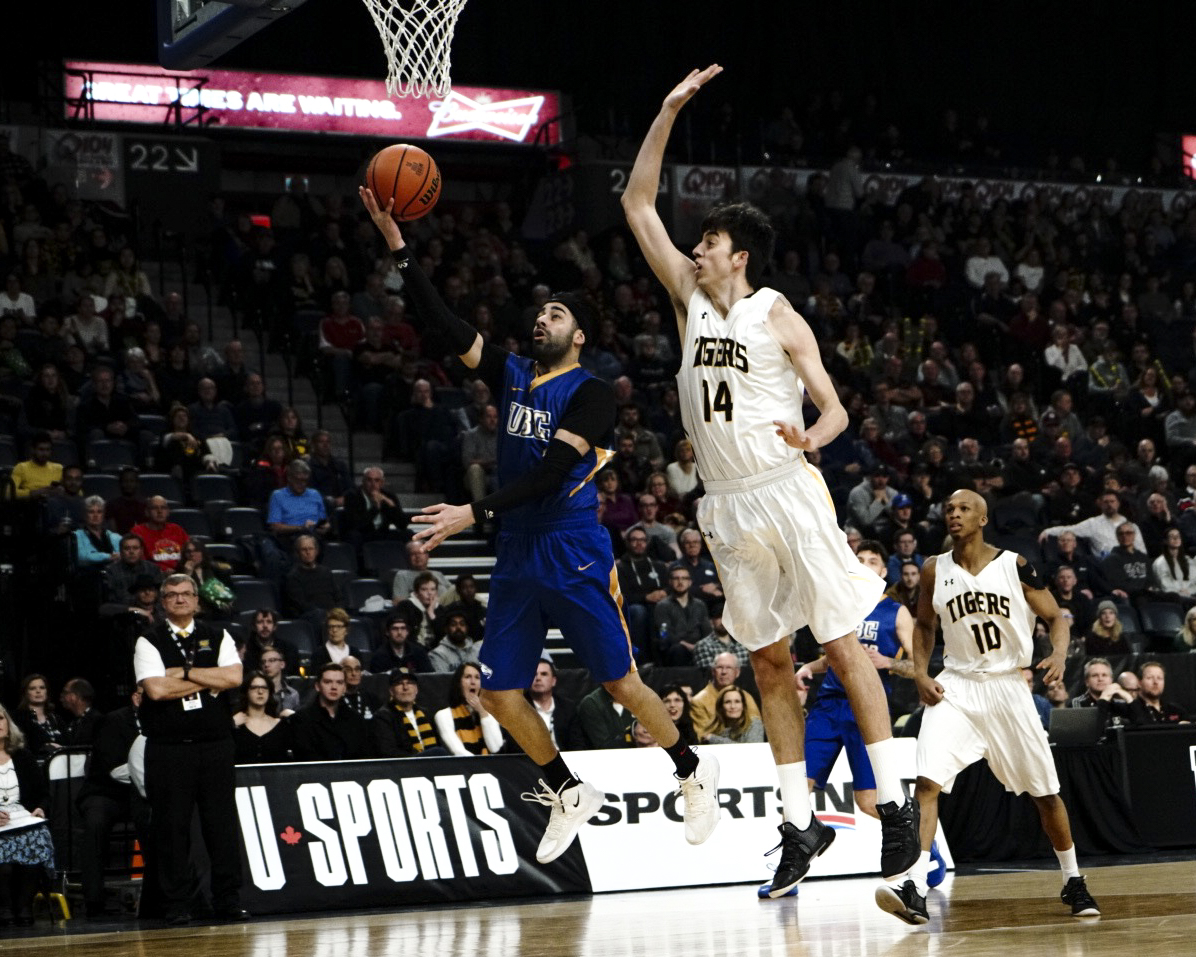 The pair’s efforts down the stretch helped UBC keep the game interesting into the fourth quarter. The defense came up with some timely stops and pulled the team within five points with just under two minutes remaining. But the Tigers made key free throws down the stretch and would hang on for a 74-65 victory.

Though the wound was still fresh following the game, both Hanson and Shephard agreed that the trip to nationals was not without meaning, despite the early exit. The team has a young core and a bright future to look forward to with national championship experience now under their belt.

“I’m not finding excuses. We’re a young team in terms of those guys,” Hanson said. “[Dalhousie’s] been in the national championships, multiple players of theirs and multiple years. Just that little bit of confidence, with that experience. This is really something positive to build from, for sure.”