Breaking the curse: 'Birds make it a three-game win streak against Alberta 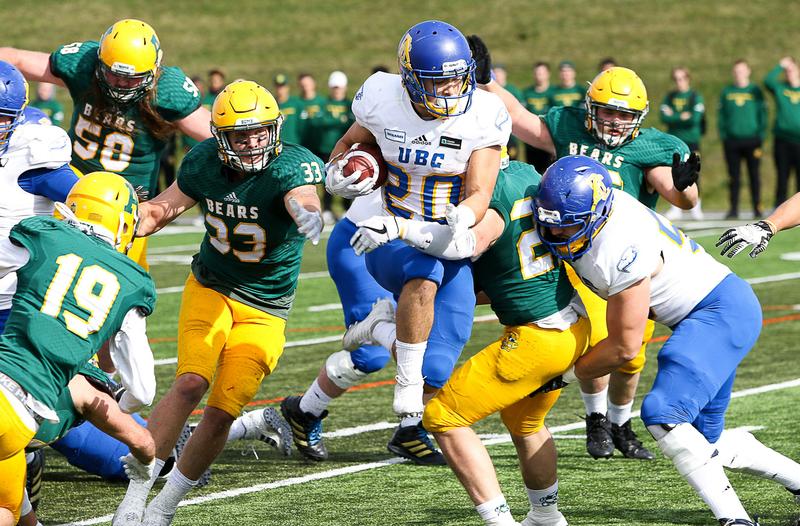 UBC running back Kory Nagata side steps in an attempt to break through Alberta's defence. Courtesy Jim Corry/University of Alberta

Coming off of their Homecoming win, UBC football extended its winning streak to three games against the Alberta Golden Bears, coming out on top 41-21 on Saturday night. The win marks the first time the team has won three games in a row since their Vanier Cup win in November 2015.

Despite the win, the ’Birds found themselves with a mountain to climb early. Two minutes into the game, Ed Ilnicki ran for the Bears’ first touchdown to put Alberta ahead. UBC responded with two field goals and a rouge point to even things up by the end of the frame.

Neither team scored another point until the final three minutes of the second quarter.

With the score tied 7-7, Ilnicki delivered again for the Bears, rushing to the UBC end zone for a second touchdown — an impressive 46 yards. Still, it didn’t take long before the ’Birds tied the score again. After the Bears kickoff, UBC defensive back Will Maxwell ran 96 yards for a return touchdown.

Before halftime, the ’Birds took the lead for the first time in the game on a team safety and another touchdown, this time from receiver LLiam Wishart.

The team’s momentum didn’t end there. On UBC’s first possession of the third quarter, running back Kory Nagata was the driving force for the team, racking up a total of 43 rushing yards before reaching the end zone to put the ’Birds ahead 30-14.

On Alberta’s next drive, Ilnicki scored his third touchdown of the night, cutting UBC’s lead down to 30-21. He finished the game with an impressive 196 yards.

Early in the fourth quarter, the ’Birds extended their lead to 41-21 on a touchdown, touchback and field goal. Neither team scored for the remainder of the game, giving UBC the final victory.

The win is even more significant given the fact that several key players on UBC’s offence were out of the lineup due to injury. Marcus Davis, Trivel Pinto, Will Watson and Ben Cummings — many of which were key to last week’s Homecoming thrashing of the Huskies — were all sidelined for the match against Alberta. Still, that didn’t prevent the offensive line from recording impressive numbers on the stat sheet. Nagata had 120 rushing yards while Trey Kellogg caught 108 reception yards in the game.

The ’Birds now hold a 3-1 season record and are second in Canada West. They return to their home field next week to take on the Calgary Dinos.