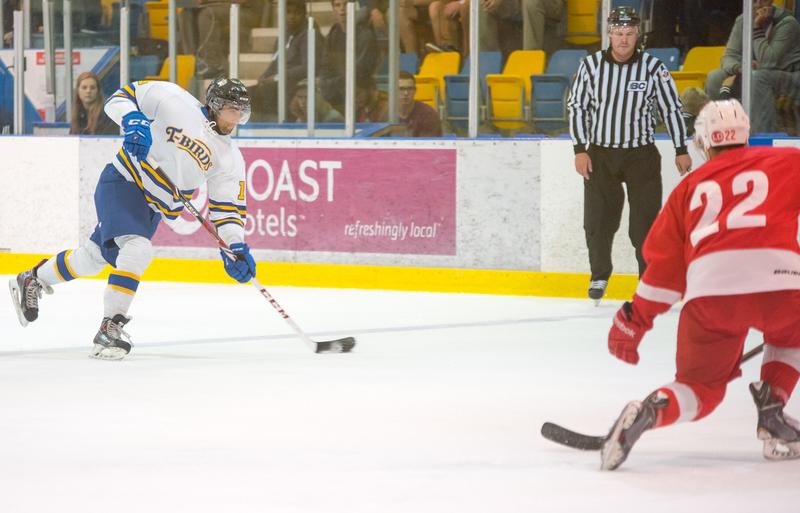 UBC destroyed SFU, as they usually do, in their annual exhibition match. Photo Jeremy Johnson-Silvers / The Ubyssey

After a long offseason, the UBC men’s hockey team took to the ice against local rivals the SFU Clan for their annual preseason matchup. Unfortunately for the Clan, history repeated itself this year as the T-Birds won by a 6-0 landslide at Father Bauer Arena. With the victory, UBC has now defeated the SFU club in seven consecutive games.

Head coach Adam Shell, who was hired last month to replace Tyler Kuntz, was pleased to get his first game under his belt.

“For me, I needed to get to know our guys in a game situation to see where we’re at and where we need to go,” said Shell. “From top to bottom it was fun tonight.”

Despite dominating most of the game, the ‘Birds got off to a shaky start. Penalties kept the team off the scoreboard in the first period as Shell’s team took four penalties in the frame, including a two-man disadvantage for over a minute.

“We got out of rhythm early,” said Shell. “I couldn’t keep the lines together, we started juggling. I wasn’t sharp in the first period either. [I was] trying to get to know our guys and find some rhythm, so I think that messed us up a bit, but those periods are going to happen.”

UBC got lucky and exited the period scoreless as the Clan failed to capitalize on eight minutes of power play time.

In the second period, it was SFU that struggled to stay out of the box, and the ‘Birds made them pay. Just 50 seconds into the frame, Josh Connolly’s wrist shot from the right beat SFU goalie Jordan Liem to the short side, giving UBC its first power play marker of the night. Four minutes later, the ‘Birds were on the offensive again as Chase Clayton deked his way through the Clan defence and found the back of the net.

For SFU, frustration ensued after the second goal. At the 10-minute mark, Clan defenceman Matt Sheeran high-sticked Anthony Bardaro. Bardaro was shaken up a bit and Shell was glad to see the WHL veteran back on his feet shortly after.

“In games like this that are against teams that you’re not going to play in the league, you hold your breath and you just want to survive, because you don’t want anybody to get hurt. But you’re also trying to build a team, and you don’t want guys to miss practice time and lose continuity. Especially [since] Bardaro is such an elite player, and for us to have him at risk is obviously nerve wracking. But thank god he’s okay, he’s a tough kid.”

Sheeran was assessed a double-minor for his troubles and the ‘Birds took full advantage of the power play, scoring twice to double their lead. First, it was Joel Hamilton who pounced on a bounce off the end boards to make it 3-0. Then Bardaro, who drew the penalty, snapped the puck top shelf from the hash marks to give UBC its third power play point. Bardaro would add to his tally four minutes later, scoring off a cross-ice feed from Nick Buonassisi to cap off an explosive second period for the Thunderbirds.

Up five goals, UBC continued to dominate throughout the final frame. A goal by Scott MacDonald late in the period put the final nail in the coffin.

Though pleased with registering his first UBC win, Shell believes there is still work to be done.

“We’ve got a long way to go in terms of being a complete hockey team. But I wanted to see how our character that … I saw in practice translate to a game…. That was more than evident tonight.”

Shell’s team will head to Kamloops and Edmonton for four more exhibition games before starting their regular season at Doug Mitchell Thunderbird Sports Centre against Mount Royal on October 9.