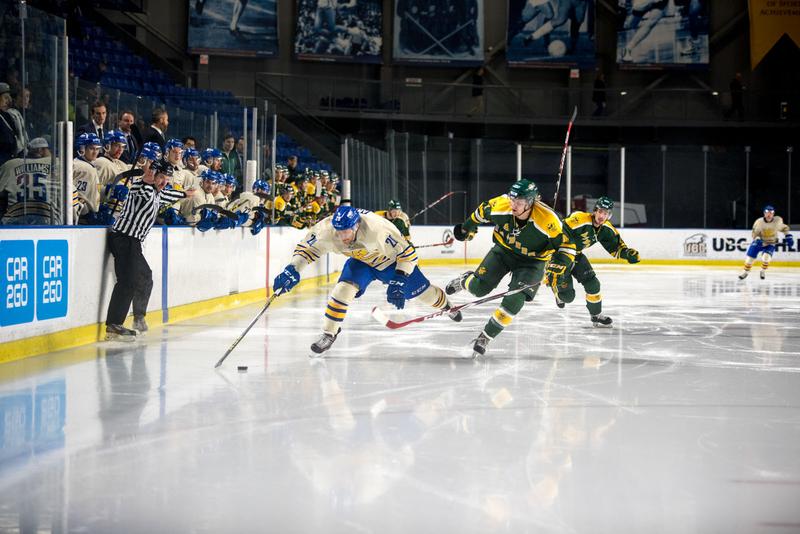 UBC couldn't end fight of two-time defending champions, the University of Alberta, over the weekend.

After a four-game road trip in Lethbridge and Saskatchewan, the UBC men’s hockey team returned to Doug Mitchell Thunderbird Arena to take on the two-time defending national champion, the University of Alberta Golden Bears. Outplayed and outshot, the team lost 5-2 on Friday night before dropping a whopping 8-5 decision Saturday.

Levko Koper’s hat trick propelled Alberta to their win on Friday night. He scored his first goal halfway through the opening frame to give his team a 2-0 lead.

UBC’s Anthony Bardaro took advantage of an Austin Vetterl rebound at 3:41 into the second period to cut the lead in half. Koper would restore the Bears’ two-goal lead on the breakaway at 14:52, going five-hole on Thunderbirds goalie Matt Hewitt. Unable to generate enough momentum offensively, the ’Birds saw their deficit widen after Riley Kieser scored early in the third period to make it 4-1 for Alberta. UBC received a consolation goal from Bardaro late in the game, but Koper would ice it for the Bears with an empty net goal to complete his three goal night. Despite allowing five goals, head coach Adam Shell didn’t seem too displeased with his team’s performance after the game.

“Not a ton went wrong to be honest,” said Shell. “In the first period, I thought we had them at three scoring chances and they scored two and we didn’t. They’re the two-time defending national champions and when you give them an opening, they score.... Was it a total malfunction of everything? Absolutely not. I thought in the second period we were quite good, to be honest. It won’t take much, we lost to a team right now that has a bit more polish.”

Having lost four of the last five games going into Saturday, Shell remained positive his team could turn the tables.

“The sun’s going to come up tomorrow, I’m fairly certain,” said Shell. “We’ve played some good teams — Lethbridge was piping hot. Sask[atchewan] is a very difficult place to play and obviously who we’re playing now. So yeah, it’s four out of five. We’re not on a run that we’d like. We gave ourselves a good cushion, but ... we lost the first night last weekend and we came back and won so that’s what’s going to happen tomorrow.”

On Saturday night, the Thunderbirds were not able to turn things around like Shell hoped. In the high-scoring affair, a back-and-forth battle ensued throughout the first two periods. Joe Antilla, David Robinson, Luke Lockhart and captain Neil Manning earned the tallies for UBC. Down 5-4 going into the final frame, the Thunderbirds’ chances quickly slipped away from them as they allowed three more goals. Goalie Eric Williams allowed eight goals and finished the game with a dismal .784 save percentage. Manraj Hayer would give UBC their fifth goal with four minutes to play, but the deficit proved to be too large for the ‘Birds as they would drop their second game in a row in an 8-5 loss.

The Thunderbirds will head to Alberta to play six road games in Calgary and Edmonton before returning to Thunderbird Arena on January 22 to take on the Saskatchewan Huskies.