Wake up call: T-Birds need to stick to their game plan if they want to contend in Canada West 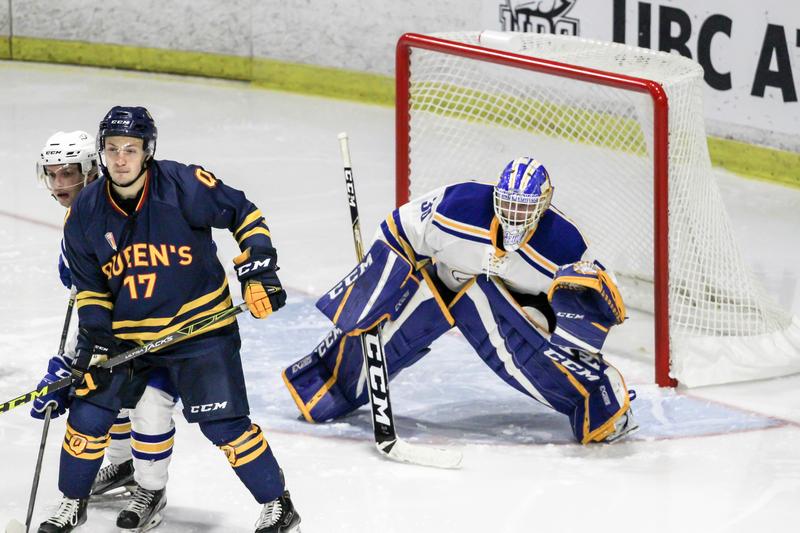 Goalie Matt Hewitt was a highlight from the weekend against Mount Royal. Salomon Micko Benrimoh

Extending their back-to-back loss streak, this time falling 4-1 and 3-1 to the Mount Royal (MRU) Cougars, UBC’s men’s hockey team faced a stark wake up call this past weekend, falling further down the Canada West table with half of the season gone.

After a four-game winning streak against the Lethbridge Pronghorns and Regina Cougars, the Thunderbirds started to face challenges in Saskatchewan last week.

This weekend’s set with MRU was going to be a critical test for the team’s playoff chances as it was their first opportunity to face a middle-of the pack team, since they split an opening weekend series with the Manitoba Bisons.

In Friday’s game, however, the Thunderbirds didn’t respond with the urgency of a team that’s fighting for a playoff spot, and it reflected on the scoreboard as they dropped the opener 4-1.

“We looked like we wanted to play a soft, fancy, Harlem Globetrotter game, and it doesn’t work,” said UBC’s head coach Sven Butenschon following the loss. “We came in loose, we came in complicated … I didn’t see any dump and chase and hit. It’s a good league and [you’ve] got to respect your opponent. Respect the system, the game plan that the coaches design for you, and follow it — and that’s it.”

From the initial puck drop, it seemed like — more than anything else — MRU wanted it more than UBC. It would take final minute desperation in the third with the team down 3-1 for the shots and scoring chances to finally come.

“Our shot total is consistently at 15 or 16 a night. You can’t win hockey games like that,” Butenschon said. The few opportunities that the ’Birds had throughout the night — including the lone goal and first goal of the season for rookie Shaun Dosanjh —were generated on the rush. The team never developed solid zone control and had trouble producing second and third chances as a result.

The team also let 37 shots head towards UBC starting goaltender Matt Hewitt, who was perhaps one of few positives on the night. Of the three goals that made it past him, one was through traffic, another a one-timer following a lost puck-battle in the corner and another a penalty shot. It is difficult to blame Hewitt for any of these goals, but if the ’Birds want to take advantage of his strong starts, they’re going to have to give him some better defence.

The woes that the team faced in generating a solid attack may be a result of the fact that they spent much of the first two periods at even-strength. The ’Birds typically rely heavily on the man-advantage for scoring — the team has the second-best power play in the league.

On Friday, UBC only managed to generate two power play opportunities, though Butenschon did not seem to think the team deserved any more than that.

“We don’t spend any time in the offensive zone, we don’t move our feet, we don’t challenge other teams to force them to play on their heels – and that’s how you get power plays,” he said. “It sounds pretty easy to fix, but you’ve just got to go out there and do it.”

The frustrations of the team were evident after Friday night’s game — it’s clear that the dressing room is not happy with losing these critical games and that the team is well aware of the ramifications that their current score lines are having on the standings.

“If we continue like this, it’ll be pretty quick before someone catches us, and we’re looking out of a playoff spot,” said Butenschon. “The guys know. They said the right things after the game and it’s just a matter of doing it.”

On Saturday, the T-Birds saw similar issues, scoring on just one of six power plays but ultimately letting two power play goals past them, with a final goal in the dying minutes of game for the Cougars solidifying another disappointing weekend with a 3-1 loss.

The ’Birds now fall to sixth in the standings, just above Lethbridge and Regina. Next week, they face perhaps the most daunting opponent in the league as they travel to take on the University of Alberta Golden Bears — Canada West’s only undefeated team.

Last season, UBC did defeat Alberta in two of their four meetings, but momentum evidently favours the Golden Bears this year. UBC will need to up their game if they hope to compete with the Canada West giants.

The puck drops to open that series on Friday at 6 p.m.